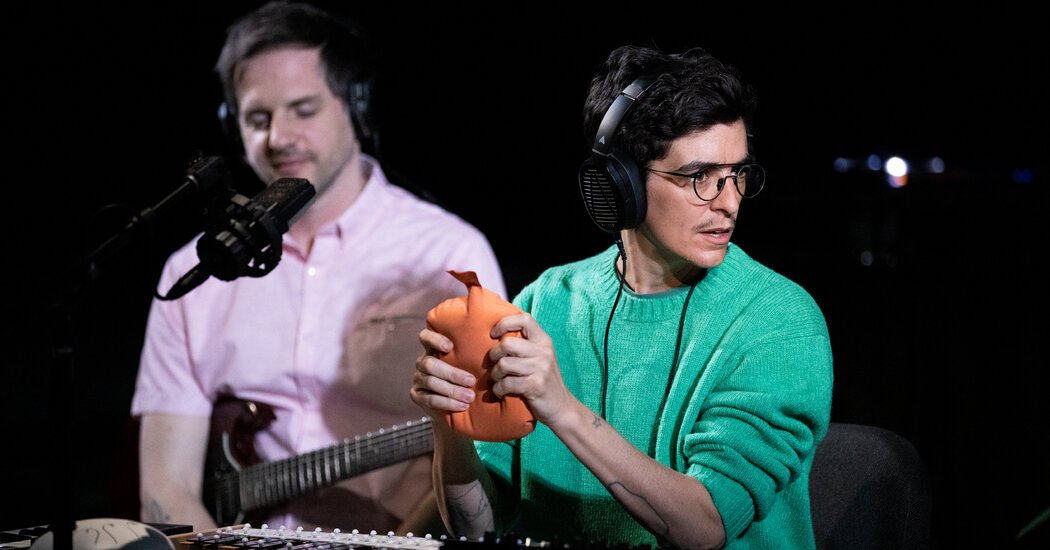 “32 sons”, a film played live, probes the power of listening

At the start of Sam Green’s tirelessly curious documentary ’32 Sounds’, the filmmaker asks an employee of the British Library Sound Archive – one of the largest collections of sound recordings in the world – if she has a favorite sound. Choosing from the nearly 7 million options in the archive, she spots a 1987 recording of the mating call of the Moho braccatus, a Hawaiian bird with dark plumage and yellow flashes sprouting from its legs.

The Moho braccatus was declared endangered in 1973, and by the early 1980s its population had dropped to two, one male and one female. In 1982, the female was killed in a storm. And so this harrowing recording depicts the male’s determined mating call – a singsong, haunting whistle of hope – ringing five years after the death of the only bird that could possibly answer it.

The mating call of the Moho braccatus is one of the 32 most memorable sounds Green alludes to in the title of his coasting documentary; there’s also, among other things, muffled gurgling from inside the womb (number one sound, naturally), the sound of a tree falling in the woods (playfully and expertly recreated by foleyist Joanna Fang) , and even the sound of silence, as evidenced by a particularly delightful montage of a wide variety of musicians performing “4’33” by John Cage.

At the start of a Friday night screening of “32 Sounds” at the Brooklyn Academy of Music’s Fisher Theater, after famous tours of Sundance and SXSW, Green himself announced to the audience, “We’re going to make a documentary film about the sound,” emphasizing the transitory and participatory nature of what was to come. “32 Sounds” is the latest in what Oscar-nominated Green calls his “live documentaries,” a hybrid form that combines the conventions of a projection of film, a theatrical performance and a live concert to create a unique and ephemeral experience.(His previous works include “The Love Song of R. Buckminster Fuller”, which featured the rock band Yo La Tengo performing an original score at screenings, and “A Thousand Thoughts”, which he produced in collaboration with writer Joe Bini and the Kronos Quartet.)

During live performances of “32 Sounds,” Green himself provides in-person narration, while musicians JD Samson and Michael O’Neill perform, in real time, Samson’s eclectic and largely electronic score. With the narrator and musicians seated in front of the movie screen, proudly displaying their processes, the effect is as if the top of a traditional documentary had been unscrewed to expose its actively humming components.

Each audience member also receives a pair of headphones – Green and his team travel with 500 of them – to better immerse themselves in the film’s soundscapes, and in particular for their experimentations with binaural audio. Among the lively cast of characters Green encounters in his expansive meditation on sound and human memory is Princeton physicist Edgar Choueiri, who experiments with recordings that mimic three-dimensional sound. He demonstrates this viscerally, by shaking a matchbox at various points around a binaural microphone; by wearing headphones, the listener can detect matches moving through space. It’s heady and dizzying, like high-tech ASMR.

While there’s certainly a special charm to seeing “32 Sounds” live (especially during a five-minute interactive dance break, when Green invites audience members to take the stage and feel the tremulous power of a pair of subwoofers as Samson acts as DJ), the filmed narrative is engaging and richly visual enough that “32 Sounds” still achieves many of its most spectacular effects at home, preferably with a pair of good headphones. (It performed virtually at Sundance and is the first of Green’s live-action documentaries that, in addition to being performed live, will eventually be streamable.)

If there’s a star of “32 Sounds” (aside from the human ear), it’s feisty Annea Lockwood, an 82-year-old experimental composer who’s been recording rivers in the field for more than 50 years. There is an infectious wonder on her face as she invites Green and the viewer to listen to the loquacious chatter of organisms picked up by her underwater microphone. She prefers the term “listening with“rather than listening for — a non-hierarchical way of framing the coexistence of humans with the sound environments that surround them.

Much like Cage’s “4’33” or composer Pauline Oliveros’ “deep listening” philosophy, Green’s film aims to sharpen the viewer’s (er, listener’s) sense of hearing by redirecting consciousness towards everyday environmental sounds that we too often take for granted. . His 95-minute exploration prefers jumping across dozens of shimmering surfaces, rather than approaching the kind of depth or stillness that Lockwood seeks with his river recordings. The formal structure of “32 Sounds” is a nod to the experimental biopic “Thirty Two Short Films About Glenn Gould” by François Girard in 1993, and its chatty and curious tone sometimes recalls an audiovisual episode of “This American Life”.

What gives the film a lingering gravitas, however, is how often Green’s sonic journeys take him back to contemplating grief and loss. One man’s trash is another man’s hearing treasure, as Green discovers with the answering machine tapes he recorded to preserve the voices of deceased loved ones. Lockwood admits that part of the reason she “listens” to the chirping creatures in her garden every night is that she finds the experience of listening to music too emotionally intense since her longtime partner , composer Ruth Anderson, died several years ago.

In the early days of sound recording, Green points out that the phonograph—the first technological development allowing the voices of deceased people to have an afterlife—was sometimes advertised as a means of “stopping death”. His film serves as a poignant reminder that despite all the incredible technical advancements of the last century or even the last decade, this particular goal still remains elusive. But whether through the personal preservation of aural memories like wax cylinders, voicemails, or any number of yet-to-be-invented formats, this unpress-pause impulse on mortality is likely to echo, as the call persistent Moho braccatus, well in the distant future.