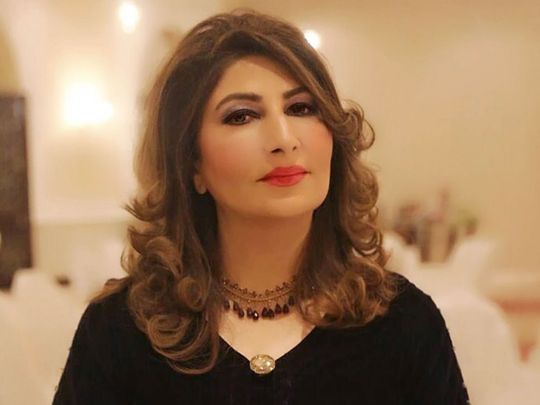 Aalia Rasheed from Pakistan: the pioneer

With her wide and deep knowledge of cricket and other sports, her blunt yet gracious and honest but never demeaning questions, comments and answers, and her impeccable Urdu, Aalia Rasheed is a rare sight on Pakistani television screens. The first female multimedia sports journalist in Pakistan, Aalia not only shattered the concrete ceiling of a male-dominated profession, but also carved out a wide skylight for the next generations of women aspiring to become sports reporters, analysts and presenters.

No shortcuts, no overnight super successes, no sudden and undeserved promotions, Aalia’s journey is long, fascinating, committed, focused, never boring. More importantly, it is inspiring. Aalia’s work is solid and unquestionably impressive: cricket journalist and columnist for Akhbar-e-Watan, a famous Urdu cricket magazine; author of a biography of Jehangir Khan, the legend of Squash; sports presenter on PTV; 14-day live broadcast of the Hockey World Cup from the PTV studio in Lahore; commentary for many national games; interviews with national and international cricketers and players from other sports; culture and sports reporter for The News, Lahore; covered several world cup matches and tennis tests and tournaments; produced and directed two documentaries on Shahid Afridi and Misbah-ul-Haq; produced a documentary on Taliban-controlled Swat in 2009; and worked as an assistant director for film and theater veterans Syed Noor, Nazrul Islam, Javed Fazl and Ayub Khawar. Aalia is also a cricket analyst at Geo News.

For Gulf News, I posed a few questions to sports journalist and presenter Aalia Rasheed:

Mehr Tarar: You chose a path that was unfamiliar territory for a young female journalist in the 1980s: sports journalism. Share your story with us.

Sports journalist Aalia Rasheed: My connection to cricket has a kind of psychological background. My parents went to the United States, and my sister and I had to stay because we didn’t have a visa. I was seven and she was five. That’s when I started watching cricket matches with my chacha [paternal uncle] and listened to cricket commentary at home with him. It made me forget the pain of being without my parents. As a child, being very emotional and sensitive, which I still am, cricket was a great emotional support.

It was 1987, Pakistan had lost in the semi-finals of the world cup, but the incredible performance of the Pakistani team had left a big impact on young minds. I wrote an article for Akhbar-e-Watan, a very popular Urdu magazine of the time, on Wasim Hassan Raja [Pakistani cricketer from 1973-1985, passed away at the age of 54 in 2006] for which the magazine awarded me a prize of Rs 1,500. Munir Hussain, publisher and editor of Akhbar-e-Watan, called me into his office and said, “You write so well, work with us. Since I was in school, he thought I was too young, and he even joked with me, “Are you sure you wrote that article?

Fazal Mahmood, one of Pakistan’s cricketing legends, sat with Mr Hussain. He asked me if I wanted to be a sports journalist. Then he asked me if I knew the first word for knowledge in the Holy Quran. I replied in Arabic: “Recite in the name of your Lord who created… 96:1]. My response delighted Mr. Mahmood and he sent me his warmest wishes. This is how my career in journalism began.

I tried to learn as much as possible from my teachers, from my colleagues. My first job as a sports presenter was with PTV [state television] in 1993 with a program called Sports Show. It was a huge success.

What was that groundbreaking story or interview that convinced you that you had made the right choice to embark on a career that would last decades and still go strong?

I was still very new to the business when the West Indies team went to Pakistan. Their fast bowlers were known to wreak havoc on the opposing batting side, and so for matches in Karachi, Pakistan Cricket Board [PCB] made pitches that were white and completely dead. I made a story about these grounds, criticizing and questioning the PCB. Hanif Mohammad [one of Pakistan’s iconic players, also titled ‘Little Master’ of cricket] was the head coach. During an interview, my direct questions upset him, and he turned off my tape recorder, saying: “Bibi, this is not my first interview”.

There are many such stories. I interviewed several prominent national and international cricketers. I interviewed visiting Indian cricketers. After winning the world cup in 1992, I rode a truck [carrying Imran Khan, Javed Miandad and other members of the winning squad in a celebratory motorcade that went from the Lahore airport to the shrine of Hazrat Baba Fariduddin Ganj Shakar (RA)] at 2 a.m. to do an exclusive interview with Imran Khan. It was a very important event in my young career. I was fasting and had a fever, but that didn’t discourage me. No other reporter managed to reach this place. That day, a story was published, and it was mine.

The “coup” against Wasim Akram happened when he was captain of the Pakistani team. It was me who told this story for which people congratulated me, appreciating my work.

Lots of important and interesting stories that kept propelling me forward. I’ve always tried to do my job honestly, looking at things for their merit. Any kind of like or dislike, I never let it affect my judgement. I have always tried to work beyond all biases to ensure that justice is done to every story and the person involved in that story. Every word I write and every word I say must be expressed with honesty because that is what we have been taught in our journalistic ethics: a journalist does not belong to any individual, to any party, to any camp.

A traditionally patriarchal setup, and you were the first to step into it, bright-eyed and full of love for the sport. What have been the most difficult obstacles – obvious and less visible – in your path to standing out as a credible voice for sports journalism on television?

At first, people said that I was covering games played by men. I’ve faced so many issues that you can relate to as a woman, some of which can’t even be addressed. The kind of gestures we face, the insulting tones. Then there were my own colleagues; some of the worst mental torture came from the people I worked with. When I worked at a newspaper, my male colleagues wrote all sorts of obscene things about me in the office toilet; my caring friends were the ones who told me what was going on.

By nature, I am very conservative, and this has been a brake on my progress, but I have never compromised on my values. I have my own rules, I don’t break them. I can’t beg anyone and it has even been detrimental in some ways. When I got married, my in-laws were told that I hung out with cricketers at night and that my character was “not good”. You know how common this sort of thing is in our society. Alhamdulillah, all these things passed, I survived everything with my head held high and my values ​​high.

As a woman, I think some injustices persist. I say it categorically that people much less deserving than me earn much more than me simply because they are men. They have the “advantage” of sex. When people have nothing else to say, they comment: “The women who should be in the kitchen are teaching us cricket”; ‘how can women who haven’t played cricket talk about it?’ Even some cricketers say such things.

These people seem to forget that some of the most renowned critics, writers, commentators and journalists may never have played cricket, but have devoted their whole lives to the sport. An example is Harsha Bhogle, one of cricket’s most renowned commentators; he never played cricket. The thing is, our society tells women you know nothing. That’s why a woman has to work harder than a man to be successful and stay relevant.

One of the most horrible questions I often face: “Aap abhi tak cricket cover kar rahi hain!” (You still cover cricket). No one asks these kinds of questions to my male colleagues, even those who are much older than me.

What advice would you give to female sports presenters and analysts to have a long but responsible career in a field that in Pakistan is still considered a male-dominated field?

All women in sports journalism need to understand that their focus should be on the game and not on building friendships with cricketers and other cricketers. They must have a good knowledge of the technical aspects of the game. If your concentration is good, you are aware of your objective and you are fully informed of what you are covering, no one will be able to stop you from moving forward. The thing is, we can’t become good anchors by dressing good and looking good. In the end, it’s your homework, your mastery of your subject, your hard work that counts. And the most important thing, the motto of my life, is that the pursuit of knowledge must never stop.

Adapt over time; after T20, now there is also T10. The nature of broadcasting has changed, the challenges are increasing, there is more glamour. It is essential to be informed of the changes. Adjust, evolve and don’t panic. Within your moral limits, focus on anything that can help you move forward.

I feel deeply happy. I think it’s my legacy that today so many women are reporting from the field, commentating on cricket, hosting shows. Men’s cricket. No one in Pakistan could have dreamed of this. The biggest criticism I used to get was that I was covering men’s cricket. This has changed. Other problems will continue. As they say, ‘Kuch to log kahain gaye, logon ka kaam hai kehna!’ (People will say something, it’s people’s job to comment). We are not going to stop doing our job, our best.

Mehr Tarar is a writer and columnist, and a former editorial editor and television presenter.