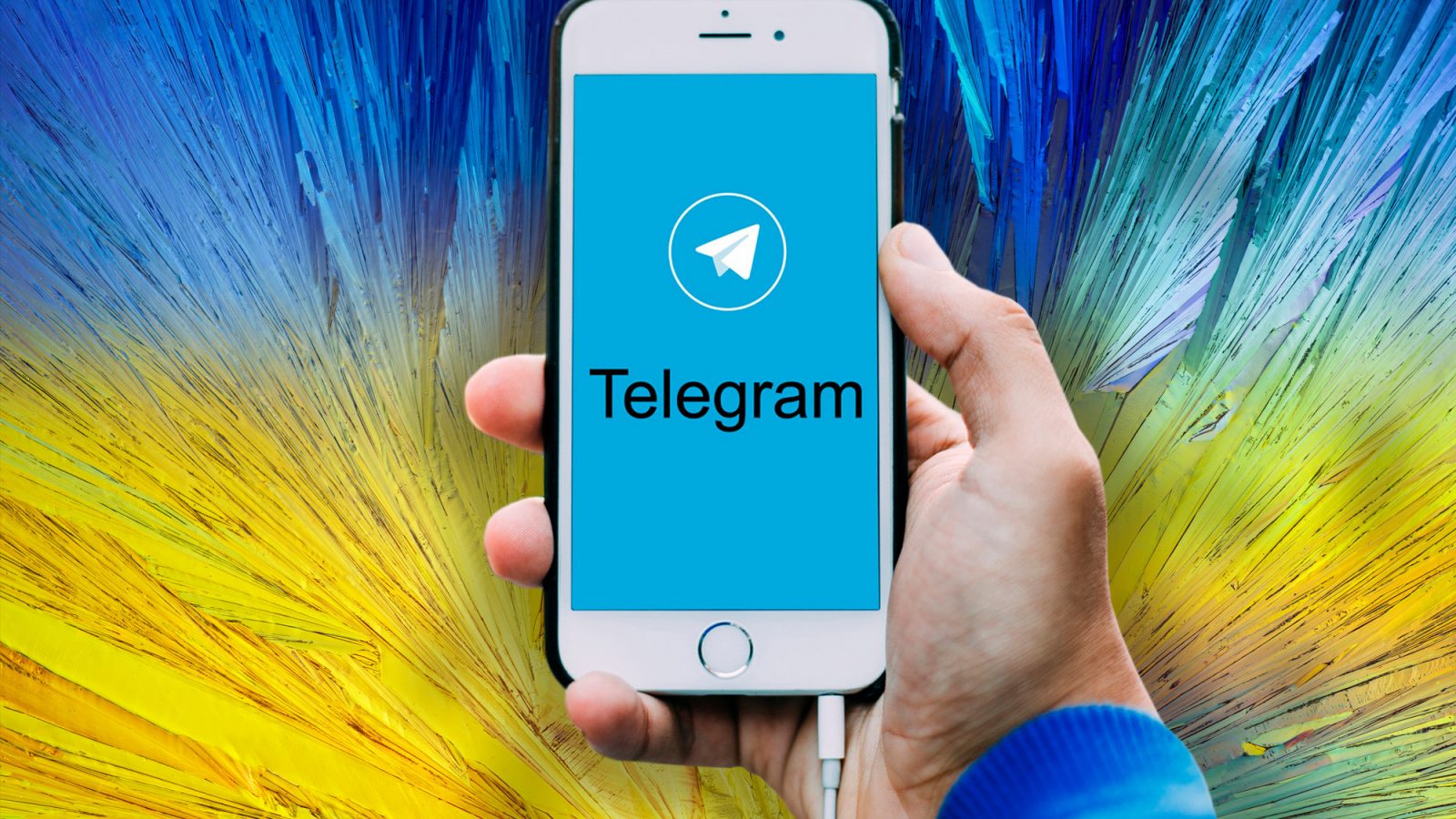 An overview of a pro-Russian telegram channel

If you spend time reading pro-Russian media like the U_G_M Telegram channel, you will notice three distinct categories of messages: dehumanizing Ukrainians, glorifying Russia, and demonizing the West. And the vein running through all three is the same: creating “news” that supports the Russian message.

The telegram is a vital source of uncensored information for Russians, but also a powerful outlet for disinformation.

The message of U_G_M is clear: heroic Russians liberate Ukraine from fascists and Nazis. Claiming to speak from Ukraine’s Russian-controlled region of Donbass, the Telegram channel began sharing its partial truths and outright fictions after protests in Ukraine toppled Russian President Viktor Yanukovych in 2014. Yanukovych currently lives in exile in Russia.

The acronym U_G_M says a lot about the channel’s ideology. It’s a term used to make fun of Ukrainians, meaning something like “Ukrainian brain disease”, and implying that the whole notion of Ukrainian identity is a lie. This reflects the Russian argument that Ukraine is an extension of Russia.

To spread its pro-Kremlin and anti-Ukraine message, U_G_M offers a continuous stream of news that used some of the most malicious lies we’ve seen in this war, including the false story that Ukrainian soldiers were using dummies to simulate civilian deaths. .

To better understand the tactics of these pro-Russian media channels, WhoWhatWhy translated and edited posts that U_G_M has been sharing for years with its 23,107 followers. 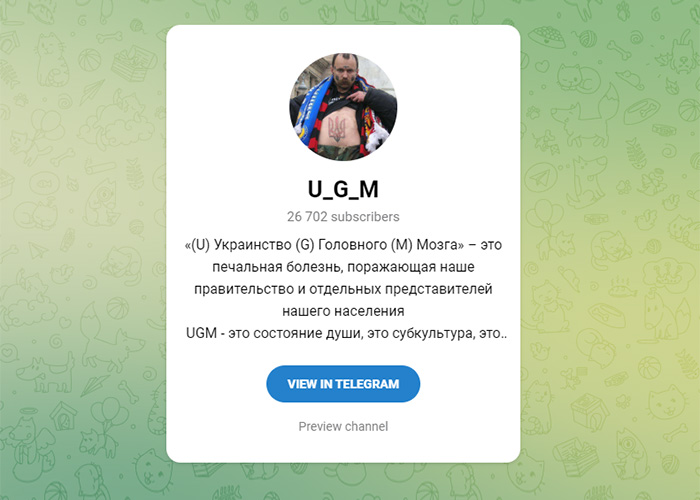 U_G_M was created on May 11, 2020, lay dormant for several months in 2021, then relaunched with its current name about three months before Russia invaded Ukraine on February 24.

In their first post on May 12, 2020, U_G_M showed a video of someone waving a Ukrainian swastika flag, and the words: “The Reich comes out.” Two years later, Vladimir Putin would use such images as justification to attack Ukraine, claiming that Russia “will seek to … denazify Ukraine”.

Besides publishing lies claiming that Ukraine is populated by Nazis, U_G_M glorifies the time when Ukraine was ruled by Russians: “Before, Mariupol (Zhdanov) was one of the most important [manufacturers] of the USSR,” says one of his earlier posts from August 2020.

In these previous posts, U_G_M describes contemporary Ukraine as isolated, viewing its neighbors as enemies, as seen in this map with the word vorogy (enemies) encircling the country, and under this statement: “The whole essence of the modern Ukrainian worldview.

As Russia began to threaten another invasion of Ukraine, the U_G_M turned its attention to the Ukrainian people, encouraging them to cede Ukrainian territory. In one post, they call Ukrainian President Volodymyr Zelensky a clown who slaughters young soldiers:

Ze🤡 wants to mobilize young people for the slaughter⁉️ As for me, it’s better to abandon this damn territory and live in peace, and not turn into a real clown in front of the public❗️💢 How many guys are going to die 😒”

On the day of the Russian invasion, U_G_M’s rhetoric became more charged: “This ghoul Zelenskyy is sending [children] at slaughter. Son, go home to your parents. It’s the best thing you can do,” a February 24 post states.

The Kremlin used this claim as an excuse to bomb residential areas and kill civilians. Recent reports indicate that a total of 2,435 civilians were killed, according to the Office of the United Nations High Commissioner for Human Rights. The real number is probably much higher. Mariupol Mayor Vadym Boychenko said his city alone supported at least 10,000 victims.

U_G_M likes to focus on Russian “success”. On February 24, the channel had this volley of messages:

“The [Ukrainian] the fighters lay down their arms, realizing it is the only way to save their lives.

“An entire convoy of Ukrainian soldiers was liquidated on the border with Crimea.”

“And 5 km from Kherson, on the Antonovsky Bridge, Ukrainian tanks are already taking losses.”

Alongside such military successes, U_G_M calls for the surrender of Ukraine:

“⚡️A group of Verkhovna Rada deputies appealed to Zelenskyy with a call to immediately start negotiations with Russia,” one post said.

Another post challenges Ukrainian soldiers: “Why are you dying like cannon fodder for this f***? Just surrender your weapons.

As the war dragged on for weeks, U_G_M continued to dehumanize Ukrainians. Some posts like this claimed that the majority of the residents of the eastern Ukrainian town of Izyum were Nazis:

“An ordinary house of an ordinary Ukrainian in Izyum🤷‍♂️”

Another post is more threatening: “Nothing changes and the awareness does not come… Denazification awaits them all.

U_G_M also continues with its false claims that Ukraine is responsible for Russian attacks on Ukrainian schools:

The frame shows a #armoured personnel carrier #of the Ukrainian Armed Forces, which was hiding behind the sports field near the school.

In early March, U_G_M also launched the narrative that Ukraine planned to attack residential areas and then blame Russia, a lie that continued throughout the war:

🇬🇧We have received information from our friends in the Ukrainian security forces that a provocation is being prepared using artillery. Under the barrel are the settlements of Bashtanka and Snegirevka of the Nikolaev region.

It should be noted that the texts of messages for the media have already been prepared and approved, which will have to massively disseminate information about the aggression of the Russian army.

From the start, U_G_M has portrayed Russia as a saviour. A post, titled “We’ve been waiting for our – #Russians,” includes a video of a woman saying, “We thought we’d never get out of here. We counted the days. They tell us — another day, two more. And then a week, a second, a second is already over. That’s when our guys came – we cried. When the man came in he said good evening – we realized it was the #Russians #come.

Other images mix contemporary Russian soldiers with WWII Russians, reflecting the Russian state’s narrative that the military is fighting an equally just war:

Attacking the West is another common theme on the Telegram channel. Disturbingly, U_G_M repeatedly uses comments made by unwitting US Republican pundits to support their false claims or twist the truth. Two posts, in particular, refer to the conservative Tucker Carlson show on Fox News.

In one, U_G_M quotes Carlson saying, among other critical comments about the United States, that the US dollar is collapsing while the Russian ruble is rising. They call Carlson’s heavily biased talk show “American news.”

In another post, they include a video of conservative political commentator Candace Owens, who reiterated Russian propaganda when she falsely stated that “Ukraine wasn’t a thing before 1989.” She also said people misunderstand Putin’s goals in Ukraine, saying it was wrong that Russia was committing “genocide”.

“A Fire Hose of Lies”

Taken as a whole, the U_G_M propaganda assault presents a picture of Russian infallibility against a backdrop of enemies against whom Russia must defend itself.

A message summarizes the U_G_M message in a poem. In the post, the channel shares a video that combines the Ukrainian and American flags, while a female narrator reads a poem that attacks Ukrainians as savages and the United States as meddling in foreign affairs, while calling Russians of heroes of the civilized world.

The poem recounts how Europe turned a blind eye to “Ukrainian fascism,” and the United States was the main force behind the 2014 protests that toppled the Russian-backed government in Ukraine. The poem says that Ukrainians killed children in Donbass and are now called upon to kill Russians, just like they did in 2014.

Yet the poem says that brave Russians are the only ones with the courage to end fascism, but violence is necessary: ​​”Sometimes to remove gangrene you have to cut the vein with a knife.”

Below the video, U_G_M quotes a Russian saying: “Russia never started wars, it ended them.

According to a report by the American think tank Rand Corporation, U_G_M fits the mold of most Russian propaganda. Rand characterizes Russian propaganda as a “firehose of lies because of two of its distinguishing characteristics: a high number of channels and messages, and a shameless willingness to spread partial truths or outright fictions. In the words of one observer, “[N]The new Russian propaganda entertains, confuses and overwhelms the public.

Russia’s information war seems to be working, at least among Russians. The Washington Post led a survey between February 28 and March 1 which revealed that 58% of Russians support the war, while only 23% oppose the invasion.