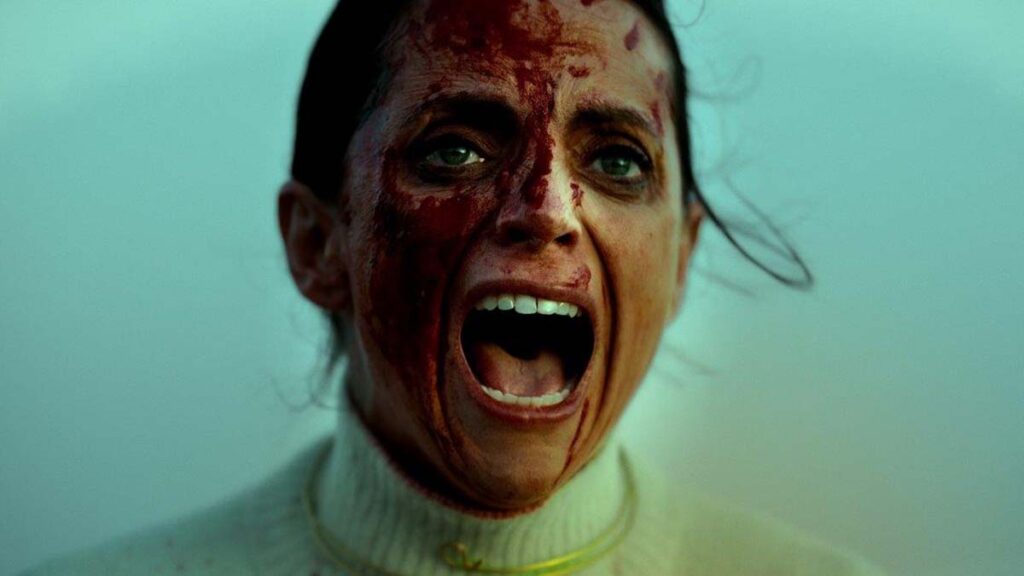 Celebrating its successful 23rd edition with thirty-two world premieres, twenty-two international/European and eighteen UK premieres, the world-renowned event is leading the way in attesting to the versatility of the genre and this year is no exception, with seventeen countries represented, spanning five continents.

The festival opens with the world premiere of ‘The Lair’, an action-packed gore shock from Neil Marshall, who calls his latest monstrous creation “‘The Dirty Half Dozen’ meets ‘The Thing'”. Neil will be in attendance with star Charlotte Kirk and will also present a special 4K restoration screening of his modern classic, “Dog Soldiers”.

The closing night film is the European premiere of Scott Mann’s ‘Fall’. Get ready for a thrilling and dizzying experience as two best friends, stranded atop an isolated and abandoned 2,000-foot-tall radio tower, fight for their survival.

One of this year’s special guests, making a welcome return, is horror icon Dario Argento, presenting the UK premiere of his latest giallo ‘Dark Glasses’, which compares to the extreme thrillers he launched in the 1970s with “The Bird With The Crystal Plumage”. ‘ and ‘Deep Red’.

This year’s main screen is jam-packed with shock and awe, Ryûhei Kitamura’s sensational grindhouse-style classics “The Price We Pay” and John Swab’s extraordinary “Candy Land”, the UK premiere of the buzz track ” Barbarian’ featuring Georgina Campbell and Bill Skarsgård, the world premiere of Dominic Brunt’s ‘Wolf Manor’, Sundance sensation ‘Piggy’, Travis Steven’s Tribeca hit ‘A Wounded Fawn’, the opening of the Cannes “Final Cut”, the French remake of ONE CUT OF THE DEAD and “H4Z4RD”, the turbo action film of the year.

It’s a rich year for ambitious and offbeat sci-fi films and the main screens light up with Mali Elfman’s warm sci-fi epic “Next Exit”, the sci-fi horror hybrid sensational “The Visitor From The Future,” Quentin Dupieux’s eccentric time-travel fantasy comedy “Incredible But True,” and “Something In The Dirt,” Justin Benson and Aaron Moorhead’s fusion of DIY sci-fi, pre-apocalyptic atmospheres and overwhelming paranoia. The visionary dreamweavers will be at the festival, as will Brea Grant, here as director of the twisted rock horror ‘Torn Hearts’ and star of “Night Sky,” Jacob Gentry’s provocative independent sci-fi fantasy.

Other main screen world premieres include “Terrifier 2”, continuing the bloody misadventures of Art the Clown, “Midnight Peepshow,” a twisted trio exploring the nightmarish side of psychosexual fantasy, horror anthology sequel “Scare Package II: Rad Chad’s Revenge”, Andy Mitton’s menacing supernatural horror “The Harbinger,” Erik Bloomquist’s coming-of-age horror “She Came From The Woods,” starring Cara Buono and the elegant psychological chiller “Mastemah” from the director Didier Daarwin, who will be present. ‘The Chamber’ director Ben Parker will also be present for his latest thriller ‘Burial’. He will bring the cast, including Tom Felton.

The documentary strand is brighter and bolder than ever and FrightFest welcomes French cult icon Brigitte Lahaie, who will present Jean Rollin’s fascinating in-depth documentary ‘Orchestrator of Storms’. The subversive and the explicit are also explored in “Cult of VHS,” which takes a trip down the Memorex lane to nostalgically relive the allure and passion of straight-to-video titles and yes, those Video Nasties. Another cult favorite is Chucky, which is the subject of Kyra Gardner’s “Living With Chucky.” Kyra, daughter of FX designer Tony Gardner, explores what it was like growing up in this creative family of stars, eccentrics, technicians and a serial killer doll.

Bloodthirsty dogs, rampaging reptiles, a teacher-eating student and a gore-filled talent show… British horror strikes a bloody sartorial vein this year with the world premiere of ‘Hounded’, starring Samantha Bond and Larry Lamb, “Eating” by Liam Regan. Miss Campbell’, Pat Higgins’ ‘Powertool Cheerleaders Vs. The Boyband of the Screeching Dead’ and “Fang!” by Paul W. Franklyn. There are also releases for “The Ghost Writer” by Paul Wilkins, Stalker by Steve Johnson and “Raven’s Hollow” by Christopher Hatton.

In addition, there is the British “First Blood” class of 2022 – “The Creeping”, with Sophie Thompson, Scott Lyus’ apocalyptic vision ‘Walking Against the Rain’, ‘Bite’ a horror story of entrapment and cannibalism, ‘The Group’ and Will Hugo’s ‘Cerebrum’ starring Steve Oram.

The festival prides itself on the depth and diversity of its discovery booth and this year three screens will be dedicated to showcasing the best new films from around the world. From Luxembourg there is the wild thriller ‘Wolfkin’, from Mexico and Peru is the long-awaited ‘Huesera’ from director Michelle Garza Cervera and FrightFest’s first entry from Cyprus is the world premiere of paranormal thriller ‘The Ghosts of Monday’. Other world premieres in the Discovery Stream include Japan’s bold and unique fantasy “New Religion” director Keishi Kondo’s subversive mockumentary ‘Everybody Dies By The End’, and daughter’, which marks the distinctive feature debut of Corey Deshon and stars Casper Van Dien.

FrightFest was one of the first festivals to focus on the fresh and delicious work of Austin director Emily Hagins when she premiered “My Sucky Teen Romance” in 2011. Now she’s back with “Sorry Abut The Demon”, a supernatural horror. a touchingly funny comedy. Having always welcomed dedicated genre directors who return with new films, we also welcome Patrick Rea with his haunting domestic violence horror film ‘They Wait In The Dark’, Eric Pennycoff with ‘The Leech’, starring Graham Skipper , the favorite of FrightFest., ‘Buttboy’s Tyler Cornack with ‘Tiny Cinema’, an offbeat, fun and quirky look at humanity, and Alexis Bruchon with ‘The Eyes Below’, the second in his noir trilogy after ‘The Woman With Leopard Shoes’.

Plus, the live-streaming era gets a deadly digital treatment in Hannah Barlow’s ‘Sissy’, Joseph Winter’s “Deadstream” and the twisted social media thriller “Follow Her.” Director Sylvia Caminer will be present.

Many special events will take place this year – “The Devil’s Hour” is a mind-blowing six-part thriller for Amazon Prime Video and FrightFest will host a special exclusive preview with talent in attendance. The cast and crew will also be on stage at FrightFest for a special exclusive preview of ‘Wreck’, a comedy horror series coming soon to BBC Three. And even more talent will be on display when director Simon Sheridan unveils exclusive footage from his upcoming naughty ’70s documentary series, “Keeping The British End Up!”

For the very first time, Alan Jones and National Treasure Mark Kermode present their show ‘Duelling Egos: An Audience with Alan and Mark’ at the Prince Charles Cinema, and Alan also takes the stage in his role as Artistic Director of the Trieste Science+ Fiction Festival , to present the world premiere of ‘Control’, the first Canadian sci-fi thriller to use real-time virtual production tools, and which will also play in Trieste.

Could it be better? Well, yes, after three years, The Duke Mitchell Film Party is back, so expect trailers, spooky PSAs, delicious celluloid finds, but most of all: utter mayhem. There’s also a welcome return of the Arrow video podcast with co-host Dan Martin live at FrightFest to chat with the big guys and the bad guys.

Finally, this year there is an additional surprise before the festival… Do you know your Cronenberg from your Carpenter? Your Pinhead from your Pumpkinhead? ‘The Evolution of Horror’, the UK’s biggest horror podcast, will be hosting a special horror pub quiz on Wednesday nights at The Phoenix Club. So join host Mike Muncer and his fellow podcasters for the ultimate horror quiz night!

Festival co-director Paul McEvoy said today: “We are absolutely delighted with the fantastic line-up at this year’s Arrow Video FrightFest. This is the craziest and most diverse selection we’ve ever put together. The mix includes a stunning variety of the latest must-have sci-fi, thriller, fantasy and horror titles from around the world. With a huge range of premiere screenings, special events and amazing guests, Cineworld Leicester Square and the Prince Charles Cinema will be the ONLY places for film buffs at the end of the August bank holiday weekend and we can’t wait to unveil our top selections to our wonderful audience.

Documentary about the famous Chilean photographer on HBO Max