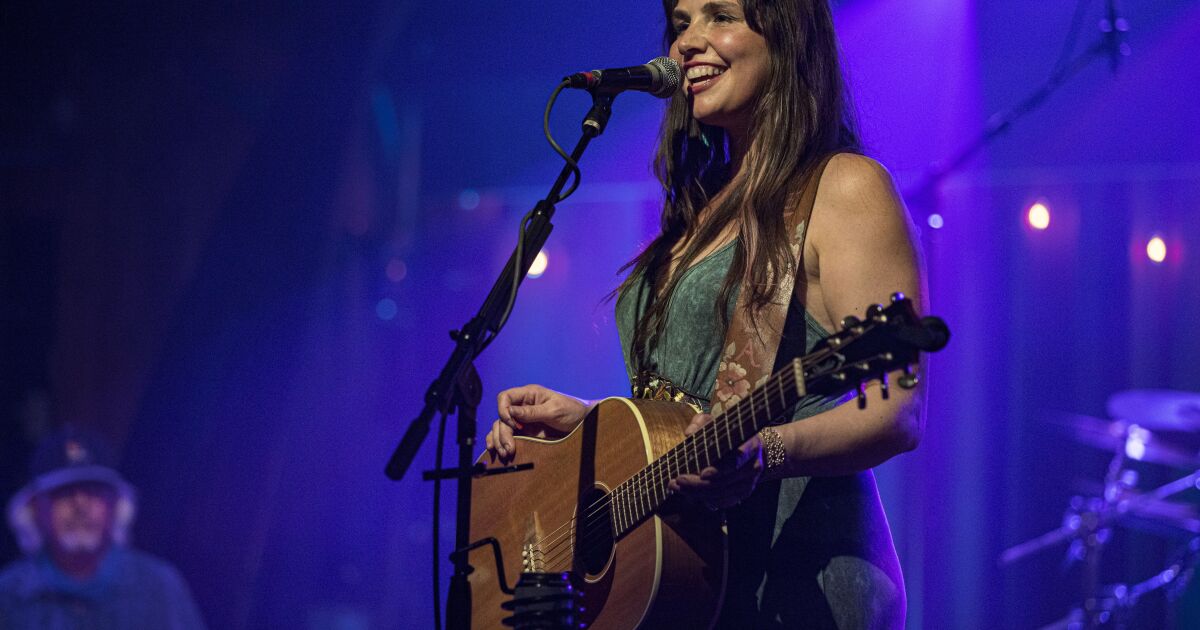 Hello and welcome to the UT Arts & Culture newsletter.

I am David L. Coddon, and here’s your guide to all the essentials in San Diego arts and culture this week.

Singer-songwriter Sarah Small recalls one of her biggest influences, the late country queen Loretta Lynn, “It didn’t seem like she was trying to be anyone other than herself. She wanted to sing about women’s lives, and she did, shamelessly. Rigorous and strong. »

Lynn died on October 4 at the age of 90. A celebration of his music takes place on Wednesday evening at Belly Up Tavern at Solana Beach when Petite makes the headlines “Review of Loretta Lynn.” She and her band will perform an opening set, covering songs made famous by Lynn, followed by a second set featuring Nena Anderson, Alice Wallace, Corbin Turner, Chloe Lou and more.

Petite’s relationship with Loretta Lynn dates back to her childhood.

“When I was a little girl,” she said, “my mom would get Loretta Lynn albums and we would sing along to them. I actually have her (Lynn’s) accent when I sing.

San Diegan Petite has another connection with Lynn.

“There is something that really binds me to it – a grainy background. I come from a hard pioneer family on my father’s side, and then his songs are also very feminist.

During her famous career, Country Music Hall of Famer Lynn has recorded 50 studio albums, two live albums and more than 30 compilation albums. Petite’s sixth album, titled “The Empress,” will be released next spring. She’s there performing the title song at the Gator By the Bay festival last May.

On Thanksgiving night 1976 at the Winterland Ballroom in San Francisco, The Band performed their farewell concert, an event billed as “The last Waltz.” The esteemed Canadian-American group was joined on stage during the long evening by Bob Dylan, Joni Mitchell, Neil Young, Van Morrison, Eric Clapton and many more. Director Martin Scorsese was on hand to film the star-studded spectacle which didn’t unfold until well after 2am.

In commemoration of this historic spectacle, The Magnolia at El Cajon is organizes its own star-studded concert Saturday evening. His “Last Waltz” features local musical luminaries including Sara Petite, Jerry Raney of The Beat Farmers and singer-songwriter Jack (“Peaceful Easy Feeling”) Tempchin. Performers will also include former Black Crowe Marc Ford and Scarlet Rivera, the violinist who played a key role in Bob Dylan’s Rolling Thunder Revue concert tour in the mid-1970s.

It should be a whole night of live music.

If Amazon Prime’s new rock documentary “Let There Be Drums” seems Dead-Centric, like in the Grateful Dead, there’s a reason for that: the filmmaker is Justin Kreutzmann whose father, Bill, was one of the famous band’s two drummers (the other being Mickey Hart). The two are interviewed at length with notables like Stewart Copeland (The Police), John Densmore (The Doors), the late Taylor Hawkins (the Foo Fighters) and Ringo Starr (Really? Do I have to tell you?) in What’s what a fascinating family takes on the life – and death – of some of the great drummers in rock lore.

While celebrating the drummers’ unique musical personalities, Kreutzmann’s film look darkly and retrospectively to those we have lost like Keith Moon, John Bonham and Ginger Baker, and the drumming sons they left behind.

Tuesday brings to town one of Broadway’s biggest dramatic hits in recent years: Aaron Sorkin’s adaptation by Harper Lee “To kill a mockingbird.” The production presented by Broadway San Diego will run through December 4 at the downtown Civic Theater.

I reserve judgment on this piece until I see it for myself, but as far as original sources go, you can’t do better than Lee’s 1960 Pulitzer Prize-winning novel, which should be required reading for everyone. Atticus Finch is one of the dominant protagonists in American literature, and the novel’s themes of racial injustice, compassion, and loss of innocence are timeless.

In my opinion, the best film adaptation of a novel is the one made in 1962 with Gregory Peck. It is available through Amazon Prime Video. Watch it with your family this holiday season.

The Thanksgiving weekend tradition that is the San Diego Jazz Festival and Swing Show will continue through Sunday at the Town & Country Convention Center in Mission Valley. Along with showcasing upbeat music, this festival features artists with the coolest names imaginable. A sample: Cornet Chop Suey. Jazzmen in nocturnal flowers. Mad Hat Hucksters. Among the artists is also a San Diego institution in its own right: Sue Palmer, the “queen of boogie woogie”, supported by her Motel Swing Orchestra.

One-day tickets to the festival cost between $20 and $40.

If the San Diego Tourism Board needs an eye-catching new off-season marketing campaign, video footage from the closing day of the 2022 Wonderfront Music & Arts Festival – where Sunday afternoon temperatures hit 75 degrees under a clear blue sky – might be just the ticket.

But leave aside the fog that set in as Kings of Leon wrapped up its electrifying headliner on Saturday night, when the temperature dipped into the low 50s, nearly 10 degrees below average here for this period of the year.

This fog, figuratively speaking, has also cast an unforeseen shadow over Wonderfront, a young festival with huge future potential and some major growing pains in the here and now.

READ MORE: 2022 edition of Wonderfront festival will be a crowd-pleaser, but crowd size has shrunk nearly to half compared to 2019 debut

For years, Mary Ann HortonHer work as a transgender advocate has included leading workshops where she advises employers on how to make workplaces more inclusive and accessible. Sharing her own transition story, people always told her they wanted to know more. With the publication of her first memoir last month, “Trailblazer: Lighting the Path for Transgender Equality in Corporate America,” they can.

“Now that I’m retired, I have time to tell it properly,” she says. “‘Trailblazer’ is the story of my life as a trans woman.”

The first chapter of his book was selected as one of the nine winners of the International Association of Dissertation Writersis annual San Diego Memoirs Showcase, where it will be performed at 7 p.m. on December 8 at the Conrad Prebys Performing Arts Center in La Jolla. The event pairs writers with local writing coaches and hires professional actors and directors to interpret the stories. The winners, along with 25 honorable mention stories, will be included in the sixth volume of the San Diego Memoir Showcase anthology, “Shaking the Tree: Brazen. Short. Memoir.” in 2024.

Tear off the wrapping paper and toast the season with this year’s best freebies, courtesy of the Union-Tribune arts and entertainment staff.

READ MORE: Holiday Gift Guide 2022: The Best Gifts to Give This Season

“Collections on the High Seas: Public Engagement and Citizen Scientists”: Have you ever wondered what lives in the deepest parts of the ocean? Curious to know how many species of fish swim under the waves? Collections like those at the Scripps Institution of Oceanography are a way for everyone to engage with and understand the underwater world. Greg Rouse, Curator of the Benthic Invertebrate Collection at Scripps, discusses how collections can effectively communicate with the public and make science accessible to everyone. It also explains how programs like SeadragonSearch, a community-based research initiative whose mission is to collect data on wild sea dragon populations across Australia through underwater photography, can encourage citizen scientists and enable new discoveries.

“Conversation with Photographer Ernie Lowe”: Enjoy a chat with photographer Ernie Lowe, who documented life in California’s Central Valley in the 1960s, with a focus on union activism among farm workers. Lowe talks about his inspirations and early experiences as a young photographer at the San Francisco Art Institute, how his parents’ struggles during the Depression influenced his work, and how he met and was mentored by Dorothea Lange and studied with John Collier, Jr. Lowe’s Photo Archive can be found at the UC Merced Library, which has made them available online through Calisphere.

“Autism and gene therapy”: What is gene therapy and how does it relate to autism? Dr. Alysson Moutri contextualizes the autism spectrum, defines gene therapy, explains how human stem cells can contribute to research, and explains how gene therapy could be used in the future. This presentation is part of the 2022 Autism Tree Global Neuroscience Conference.

And finally: the best events of the weekend

Here are some of the the best things to do in San Diego County this weekend, including World Cup watch parties, “The Nutcracker”, Christmas tree lightings and more.

Coddon is a freelance writer.