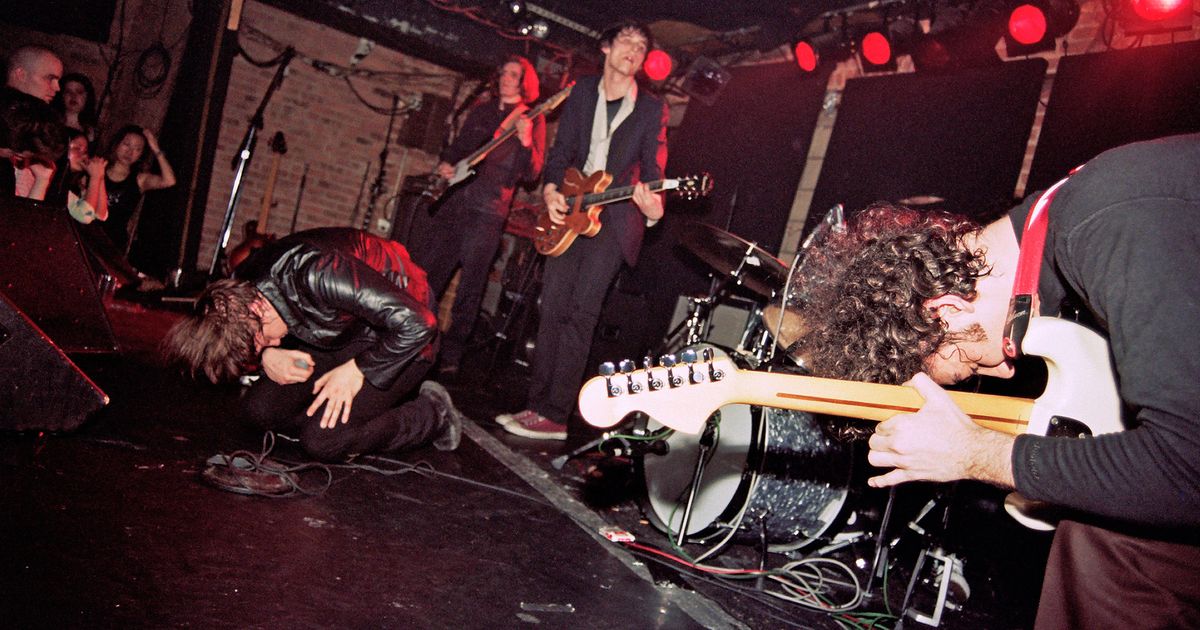 NEW YORK (AP) — Can a music scene still grow the way grunge did in Seattle in the 1990s or hip-hop in the Bronx in the 1970s? Or has the digital metamorphosis of music made such geographic explosions obsolete?

That’s a question that looms over the Sundance Film Festival documentary “Meet Me in the Bathroom,” a vivid and chaotic time capsule of early 2000s New York when bands like the Yeah Yeah Yeahs, TV on the Radio, the Strokes, Interpol and LCD Soundsystem make the city – and Brooklyn in particular – one of the last easily identifiable hotbeds of rock music.

The film, which debuted Sunday at Sundance, is directed by Dylan Southern and Will Lovelace, and adapted from Lizzy Goodman’s book, “Meet Me in the Bathroom: Rebirth and Rock and Roll in New York City 2001-2011.” Focusing primarily on the first handful of those years, the documentary is an ode to an already distant era when a wave of bands revitalized New York’s music scene, capturing the city’s gritty romanticism. Brief interludes of news footage allude to a larger digital narrative forming largely outside the stage bubble: Y2K scares, the rise of Napster, the introduction of the iPod.

“One of the things we kept asking is, is it even possible for a scene to emerge in a place with such intensity?” Southern, who with Lovelace directed the 2012 LCD Soundsystem documentary “Shut Up and Play the Hits,” said in a recent interview. “Now the way we consume music is different, the way we listen to or even make music is different. The Guardian newspaper, when they reviewed the book, they described it as a moment flash before everything changes.

“Everything is so democratized and widespread,” adds Lovelace. “People don’t seem to buzz around music anymore like they once did.”

At Sundance, however, there’s always buzz around music documentaries. At last year’s virtual festival, Questlove’s “Summer of Soul (or… The Revolution Will Not Be Televised),” which documented the 1969 Harlem Cultural Festival, was arguably the festival’s biggest hit. This year’s Sundance, which is also happening virtually and runs through Sunday, is packed with music documentaries. Among this year’s crop is the first film of a three-part Netflix documentary on Ye (formerly Kanye West), “jeen-yuhs”, and Sinéad O’Connor’s documentary “Nothing Compares”.

The films differ widely in subject matter and style, but they each resurrect a musical past that seems far removed from our present.

In the first part of “jeen-yuhs,” which debuts next month on Netflix, a not-yet-famous Ye struggles to sign a record deal, selling beats and yearning for the kind of ubiquity that inspires him. has followed, more or less non-stop, since his 2004 debut album, “The College Dropout.” His restlessness is all-consuming, as is his confidence. “Even me doing this documentary, it’s kind of narcissistic or whatever,” Ye says in a moment of self-reflection that now feels prophetic.

But there are also tender scenes in the film, directed by Coodie and Chike, that speak to what propelled Ye in the first place – like the touching and gentle support of his late mother, Donda. She’s the most supportive of moms, rapping her son’s lyrics and telling him, “You play songs like Michael Jordan shoots free throws.”

Such a maternal relationship never existed for O’Connor, who opens up about the abuse she suffered at the hands of her mother in Kathryn Ferguson’s “Nothing Compares.” For many, O’Connor has been largely reduced to a caricature – that feisty bald Irish singer who tore up an image of the pope on “Saturday Night Live”. But “Nothing Compares,” by exposing O’Connor’s life, which she talks about in off-camera interviews heard throughout the film, gives O’Connor’s music and career the depth it deserves in retracing the pain that drove her. She was only 20 and pregnant when her 1987 debut album was released.

And from the start, O’Connor was outspoken on a wide range of issues, from the Catholic Church she was schooled in to the Grammy Awards’ ghettoization of rap. Sometimes his protests were accompanied by self-glorification, but you can’t watch “Nothing Compares” (which unfortunately, since the Prince estate didn’t allow it, doesn’t include “Nothing Compares 2 U”) and not to think that O’Connor’s rage came from a genuine place. And the years that followed, which saw a lot come to light about long-hidden abuses by Catholic priests, cast his criticisms in a different light.

“I was always crazy about the media, I was made to look like a crazy person,” she says in the film. But the abuse of children by priests, she says, “It was madness.”

“Nothing Compares” suggests that O’Connor, in speaking the way she did, was ahead of her time. Still, the documentary remains largely in the past, effectively ending in the mid-’90s and not following O’Connor’s life since his brief mega-stardom. A standing ovation from Sundance could have been a crowning glory for O’Connor. The film festival‘s Q&A has been canceled after her 17-year-old son, Shane O’Connor, recently took his own life.

“Sirens” by Rita Baghdadi is set in the recent past and in a more tumultuous political context. This is without a doubt the most compelling portrayal of a female Lebanese thrash metal band you’ve ever seen. But it’s also a clear standout at Sundance and much more than a novelty act. In a documentary genre that can easily slip into the cliché, “Sirens” exists another world. Its characters, the members of Beirut-based Slave to Sirens, grapple with more extreme issues than most bands dressed in black and covered in tattoos. For them, battles for free speech and LGBTQ rights are intertwined with power deals.

It’s also a classic story of band dynamics, largely focusing on the friendship and disagreement of Lilas Mayassi and Shery Bechara, the band’s two guitarists. Their bickering sometimes resembles that of any group. But on other occasions, onstage and offstage resistance joins harmony. In one scene, Mayassi and Bechara meet and converse on the sidewalk, only to be engulfed in a marching protest, which they casually join.

Southern and Lovelace did “Meet Me in the Bathroom” (the title comes from a Strokes song) mostly during the pandemic. Although they always intended to focus largely on archival footage, circumstances led them to keep the film entirely in its time, without the modern glares of talking heads. Instead, “Meet Me in the Bathroom” captures the feeling of limitless potential – of singers seemingly born to perform like Karen O and Julian Casablancas taking their first steps on stage. The directors viewed each thread as a coming-of-age story.

“In a weird way COVID helped us because during the lockdown people had time off and they were happy to climb up in the attic or go to their storage unit and find those things that had been there for 20 years,” says Southern. “What we didn’t want to do was do a typical behind-the-scenes music rock documentary where you have talking head interviews with the bands 20 years later and it really takes you out of time. We wanted to place the audience back in that era as much as possible.