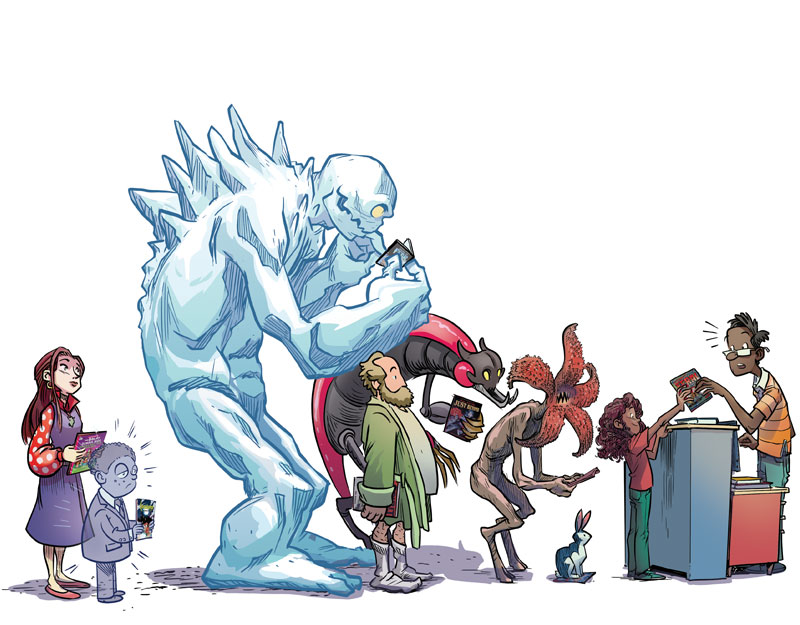 As a child, Mark Fearing watched old horror movies with his family. Later, he thinks about how he would escape the various monsters. “Werewolves were the worst,” he says. “I could outrun Frankenstein’s monster. If you have a crucifix with Dracula, it will be fine. Damn, those werewolves! They can climb through a second story window!
As an adult, Fearing still ponders the best way to survive a monstrous encounter, but from a different perspective: he is the author of Welcome to Feralthe first of a planned two-volume series set in a haunted town.

Graphic novels deliver thrills and chills, and intermediate-level readers are spoiled for choice. Some mix humor with horror; others pack in action and suspense. Links abound, from one stranger things spinoffs to adaptations of classic horror titles such as Bunnicula and shows like “Goosebumps” and “The Bailey School Kids.” One thing they all have in common? Kids lead the action, whether they’re battling monsters or befriending ghouls.

Halloween provides an excuse to showcase these titles, but kids love horror year-round. “I usually have an endless reserve list for our horror graphic novels,” says Julie Shatterly, K-5 school librarian at WA Bess Elementary in Gastonia, North Carolina. Although the collection is small, demand is high, especially for readers in grades 2 to 5, she adds. “It doesn’t matter if they are struggling readers or proficient readers, they love the chilling mix of words and images.”

There is also a lesson hiding under the cobwebs. “Horror is an allegorical storytelling device,” says film producer and graphic novel editor Sandy King, who runs horror comics publisher Storm Kids. “Whether it is for children or adults, it allows us to process our fears in a safe way. We can face what bothers us or scares us and make sense of it.

“Kids like to be scared when they think they’re safe at the same time,” says RL Stine, creator of “Goosebumps” and the “Just Beyond” graphic novel series. That’s why his books always have a happy ending. “It can get pretty scary – they can have these crazy adventures – but they know it’s all going to work out eventually, and that’s really important.”

For Stine, surprise is the secret sauce of mean horror. “Most children’s literature is very linear,” he says. “You can predict where this is all going to go. But you can’t do that with ‘Goosebumps’. There are always two or three real bumps and real twists and turns that rock everything. And I think kids like it. I think they like to be teased.

Stine puts a lot of constraints on his mid-level stories. “Nobody ever dies,” he says. “No one is ever seriously hurt. No real-world issues. If I think a scene is getting too intense, I add something fun. You don’t really want to terrify the kids.

Artists also strive to achieve the right degree of terror. Ira Marcks remembers reducing the horror in a scene from his graphic novel shark summerr. The story is about a group of children on Martha’s Vineyard watching the movie Jaws being filmed, and one of the props is a severed fake head – a head that his editor originally thought was too realistic. “She’s like, ‘You’re drawing this in too much detail,'” Marcks explains. “”Draw it to be a little more cartoonish, leave out the rot around the mouth, make the blood a little darker. “”

Graphic novels allow creators to balance the dark parts of a story with comic book art, as Fearing does in Welcome to Feral. “My style allows me to do much scarier things than if I were drawing in a very realistic style,” he says. “I hope to walk the line where it’s scary and fun and readable and interesting and intriguing and all that, but not, you know, scary. I have stories that I could illustrate that are really, horribly scary, but it is not what it is.

At Storm Kids, King constructs a carefully curated series of horror stories for different age groups. “With the smaller children’s books, I use artists who can draw in a Disney-esque style that’s accessible and kid-friendly,” she says. “As the books go up in ages, I get a little bolder in style and colors.”

“I want the younger kids to have fun and join in the fun,” she says. “I want them to enjoy the BOO! scare or the pumpkins and the bats and the ghosts. As they get older, I want them to feel good when they get off the rollercoaster safe and sound. When they get to YA , I would like them to learn to love the power of suspense and release, the dynamics of good storytelling.

“It’s not about chopping off heads and having nightmares,” King adds. “This is the AHA!” moments.”

And there are all kinds of readers. “It’s amazing how something doesn’t faze one child but scares another,” observes Shatterly. Like King, she focuses on different types of stories for different ages. For K-2 students, she chooses uplifting folk tales with a spooky twist, like “Little Red Riding Hood.” In third grade, she presents stories in which things may not be what they seem, such as in “The Bailey School Kids”. For older readers, Shatterly explores parallels between horror and history with classic folk stories from North Carolina and the Appalachian region.

When kids choose their own horror stories, Shatterly says, many strive to keep up with what their friends read. “I think they’re also exploring the boundaries and freedoms they’ve just gained as new, middle-level readers,” she says. “Intermediate readers independently explore what their horror tolerance is and where they can personally draw the line.” While many students at this age are heavily influenced by movies, TV and books marketed to teenagers, she says, “I told them they put aside the horror that was just too much for them. .

“It’s not the monster behind the door that terrifies people,” says Jack Axworth, a character in Marcks’ graphic novel Spirit week. “It’s what they conjure up in their minds the moment before that door opens.” Loosely inspired by the film the brilliantSpirit Week centers on a group of kids who want to save an aging hotel and eventually remove a local curse.

“That thing you don’t see, like the shark in Jaws— that’s the trick” that puts the imagination in awe, adds Marcks.

Other works offer the fear factor, then have an emotional impact when appearances are deceiving and the scary creature turns out to be a friend, not a foe. In Prunella and the Cursed Skull Ring, a young girl discovers that the monsters her village is so afraid of are warmer and more tolerant creatures than the people in her community. In Terror Tales of Grimm’s Town: The Rise of the Creeper, a monster cries after being hit with a baseball bat; it turns out he’s an ally, not an enemy. And in The ghoul next doora ghoul living in a graveyard explains that his kind doesn’t choose his corpse-eating way of life, then befriends the human protagonist.

Scary graphic novels inspire readers to face their fears and think about how they would escape the werewolf, just as Fearing did – and they often tap into newly discovered reserves of bravery or skill.

“At every stage of our lives, books help us process the world around us,” King says. “Some people will always be afraid of the monster under the bed. Others will gain confidence having beaten this monster before, in all its disguises.

Julianne Nicholson interview: ‘Blonde has been worshiped and brutalized and I get both sides