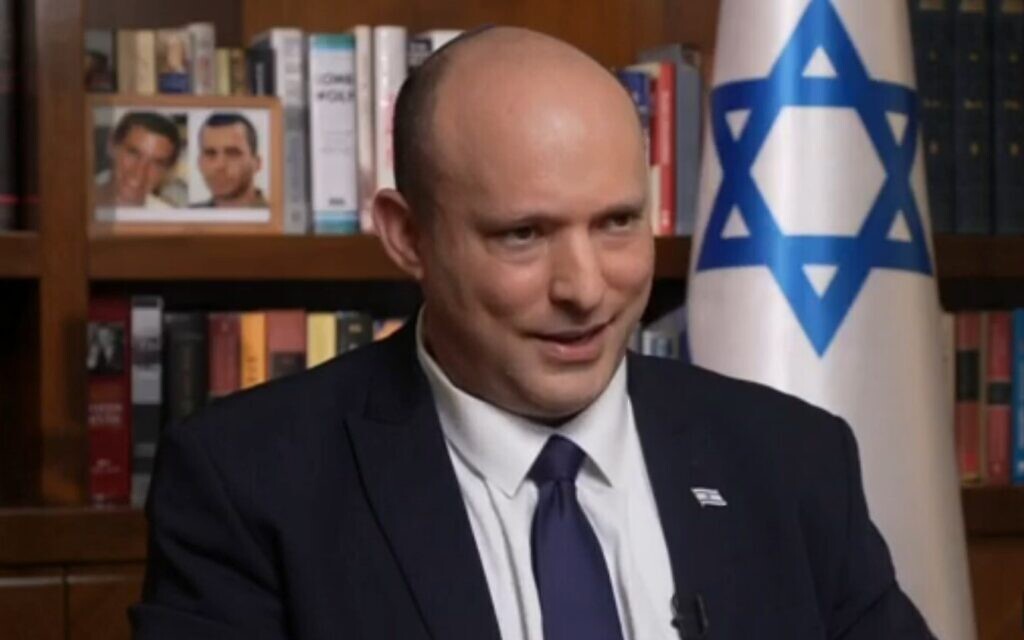 In a lengthy and candid interview with Channel 12 news, outgoing Prime Minister Naftali Bennett talks at length about some of his mistakes at work, his attitude towards Yamina party lawmakers whose defections cost him his majority, his thoughts on Benjamin Netanyahu’s suitability to return as prime minister, and the kind of government he thinks Israel needs.

In one of the many dramatic passages, he asks the hypothetical question: “Can a government that depends on [far-right Religious Zionism MKs Itamar] Ben Gvir and [Bezalel] Would Smotrich be good for Israel? No. I’m not saying they’re banned, but [the government] can’t be dependent on them… I respect a lot [Ra’am party leader] Mansour Abbas but it’s not good to be dependent on him. I want him in the coalition. [But] this year has proven that it is not good to depend on extremes.

Bennett then said, “I want a coalition [that spans the political spectrum] from Itamar Ben Gvir to Mansour Abbas – it may sound like fiction to you…”

Bennett continues, “The whole culture of ‘invalidation’ needs to go.”

Weiss then asks him if Netanyahu is a potential partner.

“If Netanyahu is the model of 2015, who has run the state with restraint, without going to crazy extremes, that’s perfectly fine. [to partner with him in government]. [But] if it’s [a situation with Netanyahu] that you are going to very bad places, then no.

“I’m on the right, but what Israel needs now is a government that just gets to work,” he says, saying that’s what his coalition did.

Weiss presses him on Netanyahu, asking if Netanyahu is fit to be Prime Minister of Israel right now.

Says Weiss: But you condemned him during your tenure as prime minister for his toxic machine and his fake news…

But the central question that determines political alliances, he says, must be what is in Israel’s interest.

In that case, Weiss asks, why not set up a government with the right right now?

Bennett says, “To set up a government in which the centre-left component is in mourning, and will be trampled on, and will have its bones broken, as [right-wing] Members say that would be very bad.

Supporting The Times of Israel is not a transaction for an online service, like subscribing to Netflix. The ToI Community is for people like you who care about a common good: to ensure that balanced and responsible coverage of Israel continues to be freely available to millions of people around the world.

Of course, we’ll remove all ads from your page and you’ll have access to great community-only content. But your support gives you something deeper than that: the pride of joining something that really matters.

Join the Times of Israel community

Already a member? Log in to stop seeing this

You are a dedicated reader


We’re really glad you read X Articles from The Times of Israel over the past month.

That’s why we started The Times of Israel ten years ago – to provide discerning readers like you with must-read coverage of Israel and the Jewish world.

So now we have a request. Unlike other media, we don’t have a paywall in place. But since the journalism we do is expensive, we invite readers to whom The Times of Israel has become important to help support our work by joining The Times of Israel community.

For just $6 a month, you can help support our quality journalism while benefiting from The Times of Israel WITHOUT ADVERTISINGas well as access Exclusive content only available to members of the Times of Israel community.

Thanks,
David Horovitz, founding editor of The Times of Israel

Already a member? Log in to stop seeing this