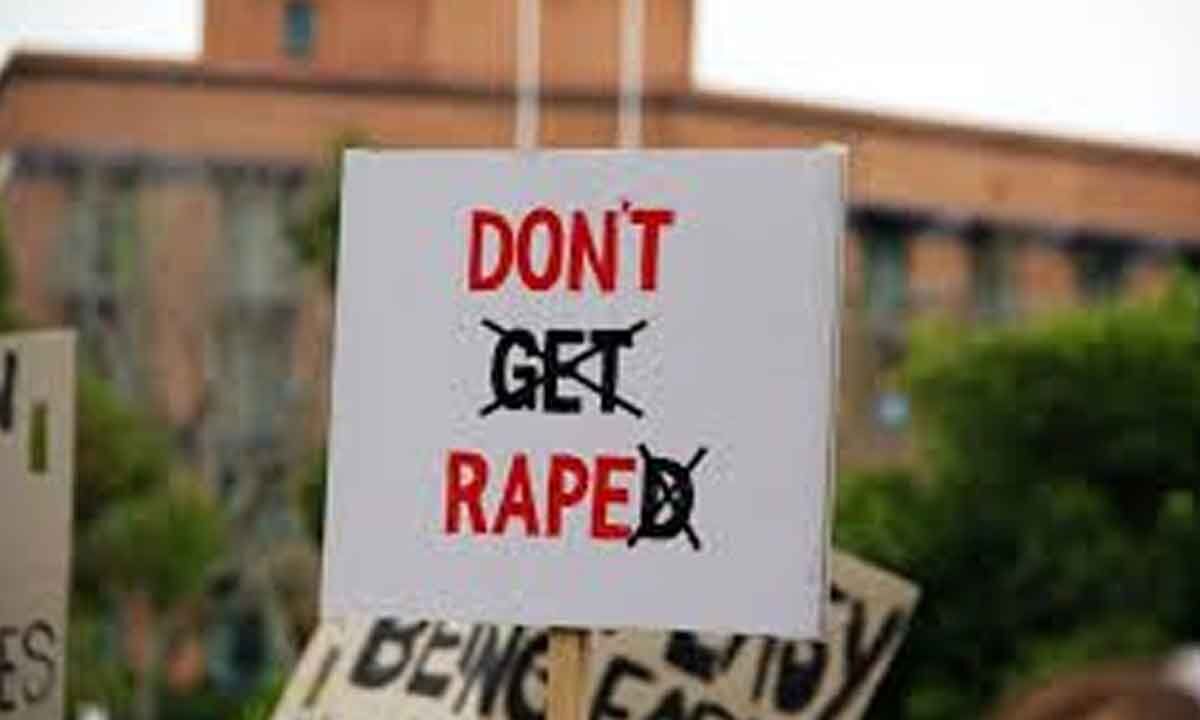 Can’t stop the rape? At least don’t trivialize it

Rape culture is an environment in which rape is prevalent and sexual violence is normalized and excused in the media and popular culture. But do we realize that rape culture is perpetuated through the use of misogynistic language, the objectification of women’s bodies and the glamorization of sexual violence, creating a society that disregards rights and women’s safety.

If a government or society wants to prevent rape or even reduce it, it is not enough to make strict laws. All other things mentioned above need to be fixed. One cannot wish for an end to crime or blame the opposition for these police station statistics. Andhra Pradesh gallops towards this shameful record, perhaps, of the country’s capital atrocities (against women).

If we consider a few examples of rape culture impartially, we can easily identify our fault lines. Several studies have established that societies, especially in countries like ours, would not hesitate to blame the victim – “She asked for it”. The trivialization of sexual assault is also common.

At least 87 rape cases were happening every day in the country in 2019, according to National Crime Records Bureau records. It is the fourth most common crime against women (77) according to a 2020 report. Of course, no one can guess whether all rapes are reported and recorded in the country.

“Boys will be boys” is how some northern politicians often react to the news, blaming girls for wrongs. In Andhra Pradesh, the tendency is to blame political rivals. Thus, according to the TDP leadership, it is the YSRCP leaders who are responsible for the rapes and atrocities while the Chief Minister, YS Jagan Mohan Reddy himself has alleged that the TDP leaders were the perpetrators in retaliation. The Home Secretary, however, sought to reprimand the mothers for their “upbringing”.

Additionally, the language itself is riddled with sexually explicit commentary and it has become an established norm with even movies and TV shows allowing obscene and loud scripts. Girls and women, in general, are afraid to report harassment or crimes for obvious reasons, as accusing fingers in households and society would point at their “behavior” first.

Another issue that bothers women is the low level of sensitivity of our law enforcement despite claims to the contrary. A victim is always judged first on their attire, state of mind, motive and story. The company she keeps is also questioned.

The Southern Connecticut State University, in its compilation, recorded that gratuitous gender-based violence in movies and television plays a significant role in these assaults on women. It is not only in India, but even in the West, it has always been believed that only libertine women are raped. Here too, the men have never been ‘schooled’.

Research suggests that people blame victims only to confirm their own invulnerability to risk. It’s like saying “I’m different from her. It doesn’t happen to me because I don’t wear clothes like her or do what she did.”

Thus, the motive for the victim is queered and she either refuses to admit the abuse or becomes discouraged from reporting it. The perpetrator is therefore encouraged to continue abusing women because he feels irresponsible. No one looks into the eyes of the victim to understand the pain and agony nor does anyone look into the eyes of the predator who gazes hungrily at its prey.

Even in cases of domestic violence where husbands often tend to rape their wives, it is the wife who is blamed if she ever complains. The maximum concession a woman gets here is: “She must have provoked it or not cooperated.” After all, he is the husband. Some of the blame is attached to him when in fact the abuser “may” also be blamed.

Do we ever understand that the abuser always makes a careful, deliberate and conscious choice to rape and does his or her actions? He never feels that he is going to hurt her. On the contrary, he feels he has the right to do so because he is a man. How very animal?

In this context, it is disgusting that our leaders speak what they speak in such cases. Can they avoid using language that objectifies or degrades women? Will society speak up if they hear someone getting offensive in this regard? Can we support women who come forward to admit they have been abused? Isn’t women’s space shrinking despite “growing civilization”? What are we going to do about it?

Turning our attention again to the AP, isn’t it strange that the TDP blames the free availability of “ganja” in the state for the regular reported rapes? Don’t blame drug addiction for the crimes. Blame the person who makes that choice to commit rape.

Don’t let the abused feel sorry or convince themselves that the abuser “loves them after all”. Love has no place for rape or any other aggression.

In domestic rape within the marital system, a woman is silenced if she has no support system outside of the relationship and cannot leave her home.

Those in power and those out of power should keep all of these factors and more in mind when responding to such crimes. It’s bad enough of a crime not to be able to prevent the abuse of women.

Why twenty-one pilots were fired from the song “Top Gun: Maverick”