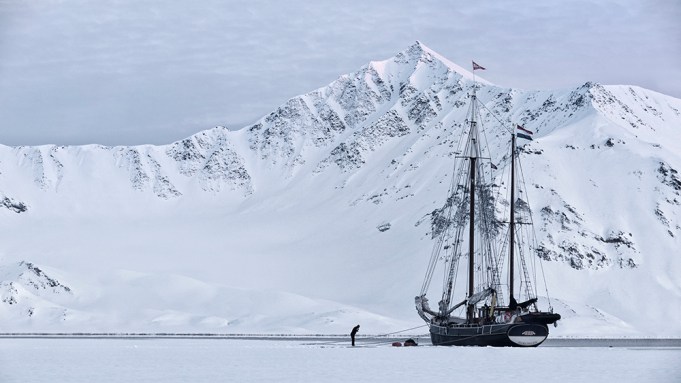 Some men go through a midlife crisis with a new wardrobe or a supercar. In 2013, Danie Ferreira, then 49 and CEO of South Africa-based Urban Brew Studios, instead fulfilled a dream he had harbored for three decades.

Ferreira grew up in subtropical South Africa; his life changed in 1983 when he took part in a 14-month expedition to Antarctica. A keen photographer, the 19-year-old was captivated by the inhospitable winter landscape – stunning white fjords and glaciers, snow-capped mountains.

“Highlights were nighttime excursions into the interior, away from the ship, to establish fuel dumps for scientists,” he says. The lure of the frozen continent was unlike anything he had ever experienced. “You are mesmerized by her splendor, even when she defeats you. Antarctica is a tough mistress, but you always want to go back.

The return took years. In 1987, Ferreira started a three-person television production company to help pay for a college education, eventually turning it into a media powerhouse with over 400 employees.

By the time he turned 49, 80-hour work weeks in a rapidly changing media landscape had taken their toll. “I loved my job, but it wasn’t sustainable,” he says. “I was burned.”

He ended up cashing in but felt lost. “It’s the time in life when the scoreboard doesn’t matter and you seek significance rather than success,” he says.

The remedy: Dust off the dream and finance an authentic expedition in the old-school tradition. In March 2013, Ferreira and Håvard Svidal, a Norwegian serviceman he had met while making a South Pole documentary two years earlier, sailed from Norway northwest to Svalbard, across the Barents Sea, on a 60-foot steel-hulled ketch. appointed Bor. Also on board: six Greenlandic sled dogs, the captain, three crew members and several friends also in search of adventure.

It was March, still winter. The boat encountered fierce gusts and was battered by seas of nearly 30ft. The water froze instantly on the rigging; the dogs on deck, although protected in cages, were scared. Svidal, braving the swaying of the bridges, often came out to make sure they were safe. When Bor sailed in Longyearbyen, it looked like a century-old ghost ship covered in ice.

Ferreira chafes that it was a crazy time for a six-day trip. “We started our research 18 months in advance to make sure we got the right ship and crew,” he says. “We were prepared.

And, he insists, it was the perfect time of year – the “blue season”, a photographer’s dream, says Ferreira, when “for a few hours at dawn and dusk, a light single blue covers the white landscape, and there are no other boats in sight.

The team spent a month exploring the archipelago, dropping Svidal and his dogs to test new sledding techniques on pristine, uninhabited islands while Ferreira filmed his documentary. ice dogs.

“Greenland dogs are genetically distinguished as high-level endurance athletes,” says Ferreira. “More thought has gone into their care than the rest of us. If the dogs weren’t smiling, we wouldn’t have had an expedition, certainly no documentary.

Traveling by yacht allowed the group to roam at will and anchor anywhere, even on drifting pack ice, while minimizing the threat of polar bears. “I’ve heard that yachting is the most expensive form of third class travel, but it was perfect,” he says. “Watching the blizzards from a warm wheelhouse with the smell of fresh coffee was heaven.” BorCardinal rule: “Do not speak unless you improve silence.”

Ferreira’s next self-funded expedition was East Greenland, the second place for ice dogswhere he and his daughter, Anna, Svidal and several others traveled by dogsled with Inuit hunters for 28 days through the mountains of Jameson Land and up the coast during the spring hunt to feed the village.

Images from this 2016 expedition and five others that Ferreira has undertaken are released this month in his two-volume box set, In the coldof Hurtwood, London.

The approximately $2,900 coffee table collection is a beautiful, haunting elegy to the polar regions. “I’ve been chasing ice as an art form since 1983,” says Ferreira. “I capture structures, textures, colors and moods as they reveal themselves through the interplay of light and time. Each passing iceberg is a found art, proof of an endless metamorphosis.

Eventually, he recognized the same transformation in himself. “I realized that life is about length and depth,” he says. “No one knows his background, but we can control the depth of experience.” The other pearl of wisdom gleaned from its second chapter: “The reward of a dream remains a dream, until you make a conscious decision to make it real.”