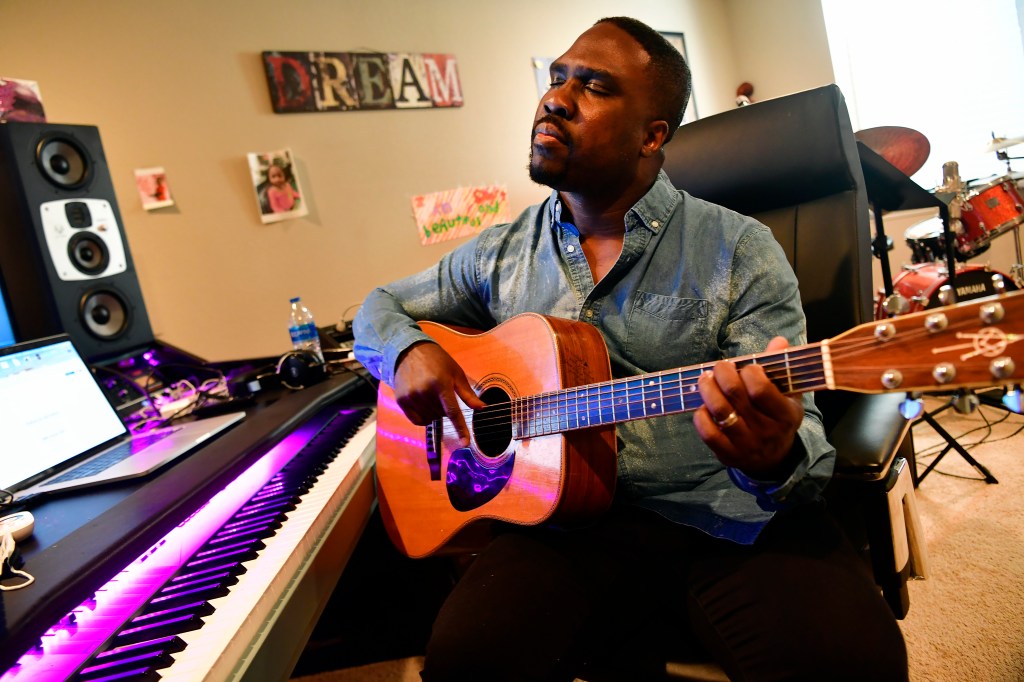 Derrick Hodge prefers to let his work speak for itself, and lately it’s been a chorus heard all over the world.

“I’m trying to hold on to the spirit of the project,” Hodge, who moved from Los Angeles to Denver in 2015, said during a Zoom interview from his basement studio last week. “I’m just getting out of the way.”

Despite (or perhaps because of) this humble approach, Hodge has produced, written and performed with some of the biggest names in music, including collaborations with Kanye West and Herbie Hancock, while winning a pair of Grammy Awards. for best R&B album in 2013 (with the Robert Glasper experience, for “Black Radio”), and in 2014 (“Black Radio 2”). He has four nominations in total.

This year, he’s been no slouch either, arranging music for the Super Bowl and, now, the Sunday, March 27 Oscars telecast.

The 42-year-old quietly landed this latest job just over a month ago and mostly completed it from his home in Denver before heading to Los Angeles for rehearsals.

Although he will appear on stage leading the Oscars orchestra, all of this work has been prepared “right here on I-70,” he said. The same goes for the “Lift Every Voice” segment he arranged for Super Bowl LVI, which was performed by Mary Mary and the Los Angeles Youth Orchestra, during the pre-game (before the national anthem) on February 13.

Still, the Oscars are one of his heaviest jobs in a career filled with them. Hodge has been given carte blanche to find his own way to honor the music of the 2022 nominated films as he sees fit, and that’s more important than ever, he said. There will be lush strings and brass that evoke Oscar history, but also modern touches that keep the ceremony relevant in the 21st century.

“Composing during the (pandemic and quarantines) has meant that these Oscar-nominated composers feel like they’re doing a lot of these things in secret or in silence, so it might mean more to them this year,” said Hodge, who has also composed for several documentaries and narrative feature films.

Hodge has plenty to work with, between nominated scores by Hans Zimmer (“Dune”) and Germaine Franco (“Encanto”) and original songs by BeyoncÃ© Knowles-Carter and Dixson (the song “King Richard” “Be Alive”) and Billie Eilish and Finneas O’Connell (the title track from the latest James Bond film, ‘No Time to Die’).

The breadth and depth would intimidate some producers, but much like Hodge’s busy schedule, it’s a comfort zone. Even as he just produced shows for Christina Aguilera and HER and arranged music for the 2022 Oscars telecast, Hodge began work on the Hollywood Bowl’s 100th season opener on March 3. June. The massive showcase will feature Gwen Stefani, Branford Marsalis, the Los Angeles Philharmonic Orchestra (creating a new custom-written piece by John Williams), ballet dancer Roberto Bolle and many more.

“What’s motivating right now is having the ‘No Time to Die’ and ‘Parallel Mothers’ themes in my head and writing at 2 a.m.,” he said. “I want there to be surprises that make people say, ‘Oh, he really went!’ But I always work on the next thing as soon as I get it.

Born just outside Philadelphia in Willingboro, NJ, Hodge’s musical life began at age 6 as he explored gospel, jazz and other musical styles, he said. . His biggest career began at the age of 18 working with musician Jill Scott, whom he idolized, in Philadelphia while helping to pioneer the neo-soul sound. He followed his instincts and yet quit Scott’s tour to attend Temple University, where he studied jazz composition and performance.

Since then, he has collaborated not only with Kanye West and Common (on the latter’s album, “Be”), but also with Quincy Jones, Q-Tip, Mos Def, Timbaland, Lupe Fiasco, Andre 3000, Sade and Terence. Blanchard.

Hodge, who also served as musical director for the artist Maxwell for a decade, was the first musician to introduce hip-hop to the National Symphony Orchestra and the Kennedy Center, and was a strong advocate for documenting and bringing in light of black musical history. Since 2013, he’s been on the roster of acclaimed jazz label Blue Note, where his third solo album, 2020’s “Color of Noize,” continues to seamlessly fuse record scratching, vintage synths, and double-decker percussion. time, as well as smooth, hypnotic grooves. .

“Noize” was produced by Don Was – the manager of Blue Note, and a musician and producer who worked with the Rolling Stones and Bob Dylan, as well as Denver jazz legend Ron Miles, who died last week. Granted, Hodge isn’t the only Blue Note fixture to call Colorado home, but he’s still investing to learn more about Denver’s growing music scene.

It’s just that between the pandemic and his generally busy schedule, he hasn’t been able to immerse himself in it as much as he’d like. He threw a party in December that brought together dozens of local musicians, and spilled over into an impromptu jam session outside his Green Valley Ranch home.

Being more grounded has allowed Hodge to find “innocence and abandon” over the past two years, dismissing preconceptions about work and creativity as his travel obligations fade away. He sometimes ignored his studio setup to compose simple melodies on his piano, a 1901 Ludwig that belongs to his wife’s family.

“Honestly, being home has allowed me to work out so many things that I probably wouldn’t have been able to do otherwise,” he said. â€œIt’s been a blessing because the more you try to be yourself, the more people cling to it. â€¦I tend to work when it comes to being honest about what the universe has given me, whether it’s a performance here in the city, or playing on ‘Black Radio’ (by Glasper ), or produce something that millions of people watch.

Subscribe to our weekly newsletter, In The Know, to receive entertainment news straight to your inbox.