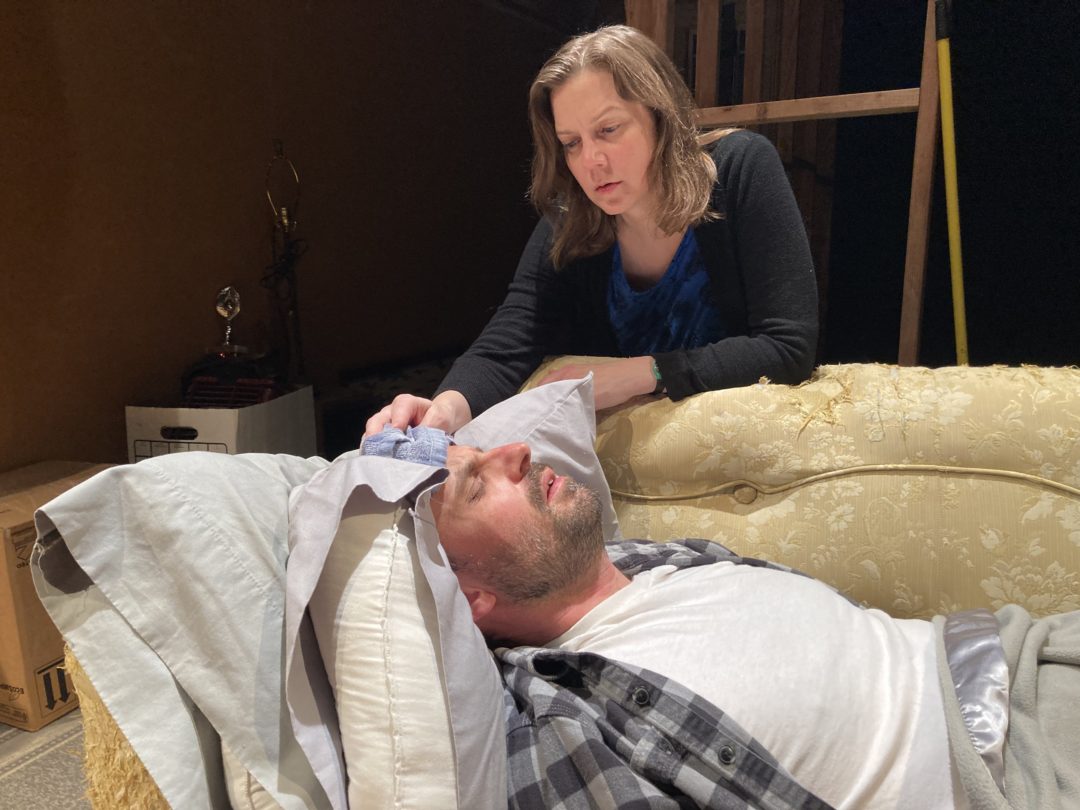 DramaWatch: The Malevolence of the Birds

“I say this with caution: before Covid, I thought it was impossible to scare an audience in a theater now.”

That’s what Imago Theater co-founder Jerry Mouawad says, reflecting on the parameters of onstage horror as he offers a set tour for his latest show. In part, he suggests, the artifice inherent in the theater is too well known and too present; “We can suspend disbelief, but only to a certain extent,” he said. And maybe with all the devices audiences have been exposed to in decades of film and television, it’s easy to be jaded and not to be impressed.

“But I think the tension we have in the midst of Covid increases what we feel when we are sitting in a theater. “

The tension of strange and dangerous times crosses The birds, which opens Friday in a production directed by Mouawad. The play, by the formidable Irish playwright Conor McPherson, is – like Alfred Hitchcock’s famous 1963 film of the same name – a liberal adaptation of a story by British writer Daphne du Maurier, first published in 1952. And if the idea of ​​a bird attack apocalypse, the premise of the three versions, has at times seemed purely fantastic, think back a little bit to the summer and fall of 2020, when – in the midst of contagion viral disease, escalating social protests, smothering smoke from forest fires, “deadly hornets” etc. – people were making semi-serious bets on whether the next calamity would be one. “Rain of frogs” or something else Vengeful gulls wouldn’t have been such a big surprise.

Mouawad says he discovered the piece after working on a long-distance audio production with former Portlander Drew Pisarra, poet and monologue. Mouawad asked Pisarra to suggest a few plays and he recommended a book of McPherson’s work.

Matt DiBiasio, who has appeared in other Imago productions including The dark and dazzling version of Mouawad by Yukio Mishima The Black Lizard, plays one of the main roles here, but the other actors (Melissa Jean Swenson, Elizabeth Rees and Paul Bright) are newcomers to Imago.

“It looks like a four-person room, but you dig into it and it’s a pretty big production for Imago,” says Mouawad. While McPherson doesn’t put much emphasis on terror-inducing aerial attacks, the production will use a mix of puppetry and sound and light designs to create the right anxious atmosphere.

Each of the three iterations of The birds presents – without explanation or backstory – a scenario in which the birds suddenly start to congregate in large numbers and launch deadly attacks on all humans, even massive assaults on buildings to reach us through windows or all the openings they can find or make. The original story of du Maurier takes place in the English county of Cornwall and describes the beginning of the attacks from a farmer’s perspective. The Hitchcock film, with a screenplay by Evan Hunter, is set in Northern California and features a more elaborate plotline centered around a budding romance between a self-centered socialite and a lawyer. Both stories suggest that bird attacks are becoming more than a local phenomenon.

McPherson’s version, set in “New England in the Near Future,” is again about a different set of characters, strangers hiding together in an abandoned house in the countryside. Grandsons in the dialogue suggest that humanity has been subjected to long-sustained assault, with the few survivors only venturing during times of low tide when birds are not attacking – a curious feature of the original premise of du Maurier – to collect falling food. and supplies. (And you thought locking down Covid was tough.) It’s like all three stories have become parts of the same dark story.

And yet, although it is still very much framed by the fight to the death and the end of the world as we know it, this version rests not so much on horror as on a more subtle sense of threat, its preoccupations in ultimately less with the danger of the beak and claws than of the human psyche.

“I really don’t think McPherson wrote to scare you,” Mouawad says. “Hitchcock, horror movies, survivor stories – this kingdom is at stake while at the same time another kingdom is at stake. It’s an unusual world – the end of the world, with bird attacks But McPherson used that to look at other things. That the birds attack and these might be the last people alive becomes, well, not irrelevant, but it becomes the background. As the play progresses, relationship development comes to the fore. We see that the real fear does not come from birds but from other humans. “

“The birds certainly appreciate everything we’ve done for them. “

Elf – the musical, Coming to the Lakewood Theater in a production directed by Michael Snider, is an adaptation of the 2003 hit film that starred fiercely no fun (as in no fun at all, ever) Will Ferrell. Go enjoy it – if you like that sort of thing.

Angela Allen, in a review for ArtsWatch, called Frida … a self-portrait “without excuse, strange and beautiful.” The final performances of Vanessa Severo’s solo dive into Mexican painter Frida Kahlo’s mystique will take place this weekend at the Portland Center Stage.

Request Pulse XV, the last improv excursion for members of the Oregon Children’s Theater Young Professionals Program, was so strong that OCT was able to increase the number of seats available in the Brunish Theater. So while the show is no longer sold out (and how often does that happen?), There are only three more performances planned.

Best line I read this week

“I think that when people in several centuries to come look at the twentieth century, they will probably see the signs of a world civilization consumed by the communication technologies it used.”

That’s all I have for now. I will try to do better next time.

Marty Hughley is a Portland journalist who writes on theater, dance, music and culture. Her accolades include a National Arts Journalism Program Fellowship at the University of Georgia, a Fellowship to the NEA Institute of Art Journalism in Theater and Musical Theater at the University of Southern California, and First Place Awards. for artistic reporting in the Society of Professional Journalists. Pacific Northwest Excellence in Journalism Competitions. In 2013, he was inducted into the Oregon Music Hall of Fame for his contributions to the industry. A native of Portland, Hughley studied history at Portland State University, worked for the alternative weekly Willamette Week in the late 1980s as a pop music critic and arts editor, and then spent nearly ‘A quarter of a century as an Oregonian as a journalist, writer and critic. His recent freelance work has appeared in Oregon ArtsWatch, Artslandia, and Oregon Humanities Magazine. He lives with his cat, and dies a bit with each new setback from the Trail Blazers.

More stories from this author

AIDC returns with an in-person conference