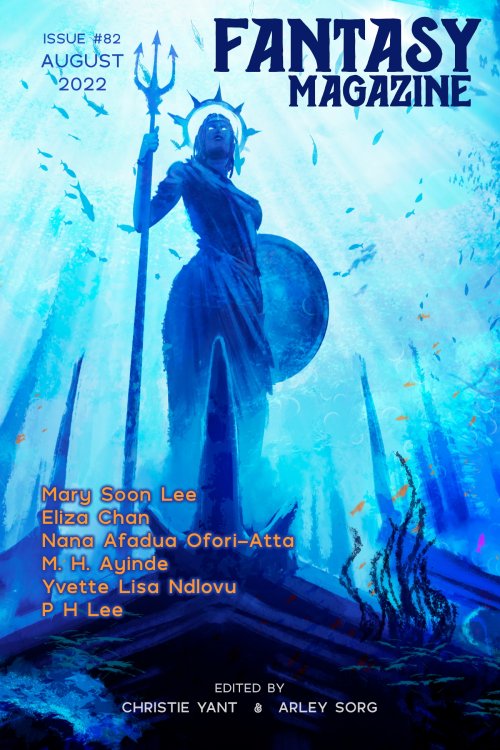 August Fancy brought a number of works dealing with the power of stories and narratives, including the complex “The tails that make you” by Eliza Chan. Written in the second person, you are a woman with tails, a huli jing, and while for some this may be a mark of pride and power, for you it is clouded with shame, trauma and terror. The piece travels back in time, touching each moment on a new tail that has appeared and dwelling on how these tails have become symbols of perceived morality, availability, and identity. For some, the tails have become invitations to action and violation, a reminder that justice is not equal for all – that there are those who are unprotected, whose identities and bodies become a complicated battlefield on which others interfere. This is strong and unsettling work from Chan, captured with pain.

Let’s move on to the September issue, and KS Walker tells a story of separation and reunion in “How to join a colony of seafarers or other ways to find out”. In it, a woman has lost her partner, her love, and seeks to find them. She’s too smart to embark on a doomed mission to retrieve them from the sea, however, and recognizing the power and dignity of the water deity, she adopts a different method instead, relying on sinister magic that doesn’t have to be specific as much as it has to be serious and necessary. Walker beautifully traces the space between land and sea, the edge of the tidal pool where magic seeps in from below, and could offer a portal to some sort of happy ending. In poetry, Angel Leal writes a narrator giving advice on children who are… a little different in “The hole is the beginning”. It focuses on those children who are born with a drop of water in their veins that sets them apart and fills them with strange hungers. He emphasizes the importance of acceptance and understanding, even when it seems to embrace tragedy.

Speed ​​of light‘s August brought with it”SyncALife” by Ruben Reyes Jr. (his first time in publication), a story about technology that promises to bring back the dead and a son wanting to have a different, healthier relationship with his recently deceased father. As he trains his “father” in his new robotic body and turns to sex work to pay the bills, the narrator begins to experience a new kind of satisfaction as his father accepts more of him – his sexuality and her relationship with another man. But all is not perfect, and the narrator’s happiness rests on a fragile olive branch stretched between life and death, weighed down by the growing personality of his father in his new body. It’s heartbreaking yet ultimately liberating and beautiful work that Reyes produces with captivating and emotionally resonant prose. In “The watchmaker and his daughter”, Tobi Ogundiran weaves another story of grief and loss and family as a man living in a busy city tries to care for his sick daughter. He remembers a time before the invasion, when their town was famous for a fruit that could cure everything – a fame that caught the attention of an invader. Desperate to help his daughter, he takes risks in search of any trace of the fruit, only to come up against the cruel edge of colonization and oppression. It’s a dark story, but it leaves some hope in the form of stories that can’t be completely erased, and a magic that might still linger in the ground and in the tears of those who love and lose.

Moving in September and there is RJ TheodoreThis is very fun “The application of strawberry lip gloss in a low gravity environmentabout Gordon, an unlucky bounty hunter who finds herself in a sticky situation and agrees to take on some sort of adventure tourist for a six-month contract. What starts out as a bit of babysitting, however, turns into something much more serious when trouble (and Gordon’s ex) catches up with them. Theodore manages a lively mix of action, banter, and tight plot for a play that captures daring action in space while populating drama with memorable characters and a dazzling ending. It’s a story that makes me want a big screen adaptation (Hollywood, go for it).

The September/October issue of F&SF certainly captures the spirit of the Halloween season, with a marked leaning toward spooky themes, monsters, and horror. “In the dream” by Meg Elison kicks things off with a haunting sci-fi tale about a mission to Mars and technology that keeps some people awake at the expense of devoted sleepers. It’s a technology that’s mostly routine at this point in its use, and yet something strange and unexpected happens when the sleeper is allowed to have a brief waking moment. Elison evokes a sense of exploitation and motivation that completely crumbles upon contact with a moment of wonder and kindness when all the walls the crew and everyone else have built shatter upon contact with a dreamer. Lucas X. Wiseman do one F&SF his debut with “A singer in the rain”, which stars Marleen, a half-mermaid working in a speakeasy where she can sing – something as illegal as the alcohol served. But when one of her songs has an unintended consequence, things get tense and she has to live with the fallout. Wiseman builds a solid world, creating a setting where magic cannot dispel the grime or grit of the prohibition era, and vulnerable communities must come together to avoid finding themselves on the wrong side of corrupt laws or violence waiting for desperate people. Charles Andre Oberndorf creates a deeply disturbing look at infection, tragedy and horror in “The cottage in Omena”. In this one, Claire returns to a cottage where her husband died, the victim of a fungus that infects the brain and makes you want to drown…and that’s just the beginning. Oberndorf not only creates a scary situation, but a rather chilling glimpse into a possible future full of rampant virus threats, travel restrictions, and an even worse privatized medicine situation in the United States than currently exists. Through an exploration of Claire’s guilt, anger, and fear, the story tackles the idea of ​​infection and even possession in a wonderfully disturbing way.

switch to poetry, Dixon Luck has two poems in the issue, including a sharp take on horror with “The Halloween Zombie”. It’s a play that examines the difference between a fake zombie and a real one, between a person disguising themselves as something horrifying and the thing itself, and the cognitive and visceral distance between the two. The encounter depicted in the play is poignant and illuminating, showing that no mask can truly capture the power of a corpse, not only the true presence of death but its nearness at all times, awaiting a chance encounter on a shady sidewalk. to make terrifying presentations. “When they come for you” by Mary Soon Lee asks the reader a question about what he would do in the face of something monstrous. Soon Lee complicates the issue by complicating the monstrosity, finding in it something repressed and avoided, a quality that perhaps seeks comfort and understanding. The question isn’t so much what the reader’s zombie plan is, but rather recognizing Frankenstein’s mistakes and seeing a different way to react when the monsters arrive.

Charles Payseur is an avid reader, writer and critic of speculative fiction. His works have appeared in America’s Best Sci-Fi & Fantasy, Lightspeed Magazineand Under endless skiesamong others, and many are included in his first collection, The Burning Day and Other Weird Stories (Lethe Press 2021). He is the editor of the series We Are Here: The Best Queer Speculative Fiction (Neon Hemlock Press) and multiple Hugo and Ignyte Award finalist for his work at Quick Sip Reviews. When we don’t talk drunk Goose bumps, The X-Men comics and his cats on his Patreon (/quicksipreviews) and Twitter (@ClowderofTwo), he can probably find him up a beer with his husband, Matt, at their home in Eau Claire, Wisconsin.

This review and others like it in the October 2022 issue of Venue.

While you are here, please take a moment to support Venue with a one-time or recurring donation. We rely on reader donations to keep the magazine and site running, and would like to keep the site paywall free, but WE NEED YOUR FINANCIAL SUPPORT pursue quality coverage of science fiction and fantasy.

©Locus Magazine. Copyrighted material may not be republished without permission from LSFF.

In Brazil, Twitter users fear the effects of Musk’s reign | Business and…