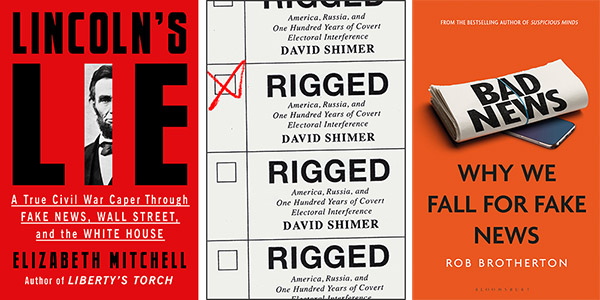 In many ways, the coronavirus pandemic has sidelined, or at least blurred, the usual topics of political debate. Former Vice President Joe Biden effectively landed the Democratic nomination without the fanfare he might otherwise have garnered, and the government response to the pandemic has been marked by unusual moments of bipartisanship.

But one mainstay of the recent political past has persisted, and even flourished, amid the Covid-19 crisis: Widespread disinformation has left citizens unsure of what to believe or who to listen to. Fraudulent texts, unproven claims about potential cures, rumors that the virus is spreading through 5G (which led to the fire in UK cell towers): everything suggests a time when authority figures struggle to gain the trust of listeners and unreliable sources get it too easily, which bodes ill not only for the current situation but also for the next election.

Forthcoming books by historians, journalists and academics attempt to make sense of these ill-informed times. Their subjects include hate propaganda on the Internet, the emergence of new, more sensationalist media platforms, and presidential deceptions throughout American history. As several headlines show, fake news, far from being a modern phenomenon, has misled the public for decades.

Disinformation is often seen as a contemporary evil, and President Trump, who has been accused of being dishonest with the media, spreading false or misleading information, and benefiting from a disinformation campaign by a foreign government, is often considered exceptional in its disgust for the press and its contempt for facts. But Trump and the era he is defining is really the culmination of long-standing trends, rather than an aberration, say the authors of several forthcoming books. These titles offer perspectives that contextualize a degraded information environment.

For Eric Alterman, columnist at Nation and author of Lying in the state (Basic, August) The story of presidential dishonesty begins with the Founding Fathers. George Washington, for example, lied about the permanent residence of the people he kept as slaves in Pennsylvania to evade a law that would have required him to release them. Much of Alterman’s book, however, focuses on more recent presidents, who he says have used deception to maximize America’s influence.

“One of the main factors that have led to the presidential lie for most of American history has been the expansion of America and the desire to increase its power in the world,” said Connor Guy, editor. in chief of Basic. These lies include Eisenhower’s about US military operations in Iran and Guatemala and Nixon’s about Vietnam, he says, and as US power accelerated, presidential duplicities also accelerated. “Every time a president lied, it was easier and more acceptable for subsequent presidents to lie.”

Even Honest Abe has made false statements. Lincoln’s lie by the old one George Editor-in-chief Elizabeth Mitchell (Counterpoint, Sept.), for example, examines Lincoln’s manipulation of the press during the Civil War. Together, these books work to present Trump as some sort of heir to an unhappy tradition.

For Guy, this contextualization of President Trump corresponds to a larger conversation about the president’s place in American history. “Everyone from Bernie Sanders to Barack Obama has recognized that Trump is a symptom, not the cause, of the problems we have,” he said.

Presidential scholar Harold Holzer Presidents against the press (Dutton, Sept.), on how various U.S. heads of state have treated the media, also presents Trump as the last commander-in-chief who competed with the press for control of the national narrative. Even George Washington had a “very difficult relationship with the press,” notes Brent Howard, editor at Dutton, and several presidents have acted to limit media access or freedoms. “Trump is not even necessarily the worst in terms of managing the press,” he adds.

In addition to battling the media, presidents have had to deal with foreign disinformation and propaganda campaigns, including those carried out by Russia or, in earlier times, the Soviet Union. Rigged (Knopf, July) by David Shimer, a Marshall scholar pursuing a doctorate in international relations at the University of Oxford, traces the history of Russian influence operations and analog methods, such as the editorial campaigns of letters and forged newspaper articles she used before social media emerged.

According to Andrew Miller, editor-in-chief of Knopf, Shimer says Russia’s interference in the 2016 election was “just the latest salvo” in an ongoing conflict since at least the Cold War. “In fact, I find it more disturbing in many ways. If you’re not talking about Trump, this is a much more ongoing conflict that won’t go away once Trump is gone. “

Disinformation has long been a geopolitical fact and new technologies have undoubtedly facilitated its production and dissemination. Several forthcoming books examine digital platforms that have changed the way Americans encounter and interpret political news.

New technologies also allow laymen to speak to large audiences and disseminate highly partisan comments, disinformation and hate. In Cultural warlords (Hachette, oct.), Talia Lavin, whose work appeared in the New Yorker among other publications, recounts the time she spent in the recesses of the Internet occupied by what she calls a “bestiary of terrible people”, including white nationalists, neo-Nazis and so-called incels. In the course of his research, Levin learns about the groups’ recruiting programs and incitement to hate tactics, and discovers the surprising influence some of their members exert: Among his findings is an exploited white supremacist YouTube channel. by a 14-year-old girl with over 800,000 subscribers.

Lies, manipulation and disinformation plagued the electoral public for generations, and new technologies have only accelerated their profusion. So where to go from here? Some authors suggest that a better understanding of how people process information could help create a better information environment.

In Bad news (Bloomsbury Sigma, May) Psychologist Rob Brotherton identifies psychological concepts that explain people’s vulnerability to fake news, such as negativity bias or a tendency to engage more with bad news. But he also postulates that a fixation on the very concept of fake news may come at the expense of a more nuanced understanding of the issues with today’s news environment, according to Anna MacDiarmid, editor-in-chief at Bloomsbury Sigma. “Problems such as sensationalism, negativity bias, inaccurate facts and misleading interpretations,” she says, “are much more prevalent than fake news. “

Building a better news environment also means thinking carefully about how to report the news. In Words that matter (Brookings Institution, June), a group of data, poll and content analytics experts examine how people handled the news in the 2016 presidential election, using data from a survey Gallup who asked respondents what news they remembered.

Stuart N. Soroka, professor of communications and political science studies at the University of Michigan and one of the book’s co-authors, says the data shows that not all news is “equally memorable.” Much of the information about Hillary Clinton that respondents remembered, for example, concerned one problem: her use of a private mail server during her tenure as Secretary of State. “The endless, almost weekly series of scandals that surrounded Trump,” on the other hand, “produced no clear storyline,” Soroka said. “The take-home message for journalists in the 2016 campaign is that they need to think seriously about the new phenomenon that is Donald Trump, compared to more traditional candidates,” like Joe Biden.

Daniel Lefferts is a writer in New York.

Below, more information on the books on politics.

Agree to disagree: PW chats with Tania Israel
In “Beyond Your Bubble” (August), psychology professor Israel offers strategies for communicating and understanding across party lines.

Politicians and Politicians: Policy Books 2020
The forthcoming books include memoirs by controversial figures, studies of prominent politicians, and reviews of the country’s recent and turbulent political past.

2020 Political Books for Children
As the November presidential election draws near, editors are wooing readers who won’t be able to vote this year, or in some cases for many years to come.

A version of this article appeared in the 04/05/2020 issue of Editors Weekly under the title: Fibs, Factoids and Fiction

I read more dystopian fiction than ever during the corona crisis. Here is why | Books

Fraud, bias, negligence and hype in the lab – a gallery of thugs