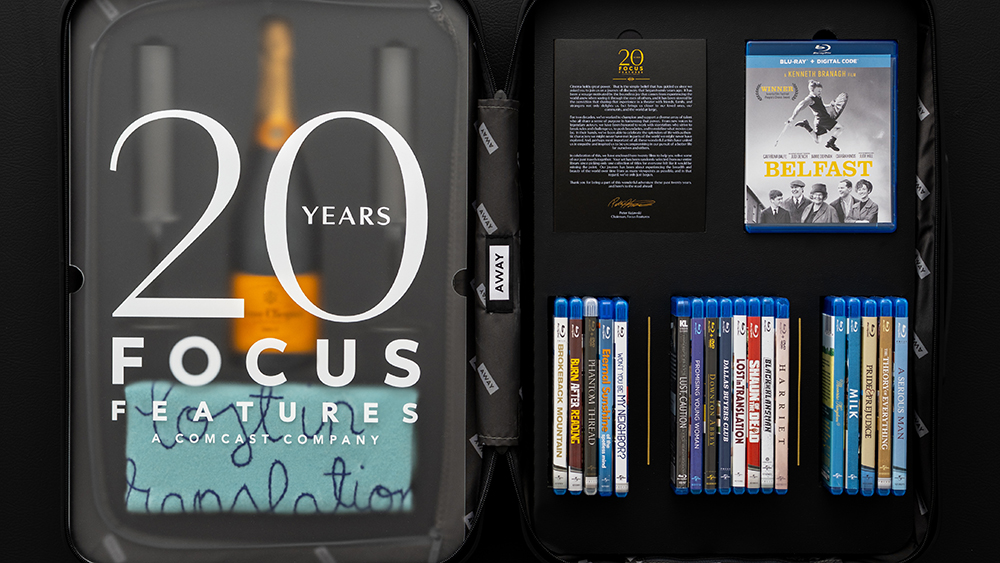 Focus Features has lined up an emotional tribute reel and some primo loot to celebrate 20 years of prestige independent cinema.

The Comcast-owned unit run by Peter Kujawski has released a moving compilation featuring its most famous films, including “Brokeback Mountain”, “Promising Young Woman”, “Lost in Translation”, “Milk”, “The Kids”, Oscar nominee. Are All Right’, ‘Phantom Thread’ and this year’s contestant ‘Belfast’. Over its lifetime, Focus has racked up 143 Oscar nominations and won 26 wins. Fourteen of those names were for best picture.

As well as unveiling a new logo marking the milestone, the studio is gifting talent, filmmakers and industry insiders Away luggage filled with a selection of 20 Focus titles, Lingua Franca sweaters embroidered with iconic lines from their greatest hits and, of course, champagne.

“From new voices to legendary authors, we’ve been honored to work with storytellers who strive to break the rules and challenge us, to push boundaries and redefine what movies can be. In their hands, we have been able to celebrate the splendours of life with authentic characters we may never have encountered in parts of the world we may never have explored,” Kujawski wrote in an included letter. in the gift.

“To celebrate, we’ve attached 20 films here to help you relive some of our past journeys together. Your set was randomly selected from across our library because picking one collection of titles for everyone had feeling like we’re missing the point. Our journey has been about seeing the breadth and beauty of the world over time from as many vantage points as possible, and in that regard, we don’t do only to start”, he concludes.

Looking ahead, Focus will next release Robert Eggers’ “The Northman” in April, followed by “Downton Abbey: A New Era,” Sundance player “Honk for Jesus” Mark Rylance’s “The Outfit.” Save your soul” and “Mrs. Harris goes to Paris.