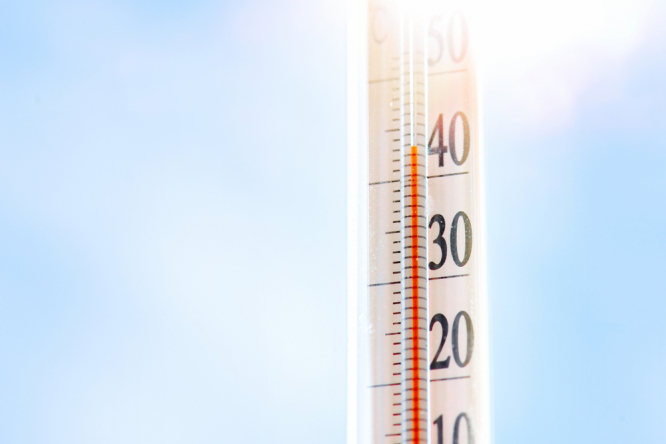 Eight years ago, a TV meteorologist presented a forecast of the temperatures that could affect France in 2050, to warn of global warming – and they were surprisingly similar to those we see today.

Host Évelyne Dhéliat showed the “false” forecast on TF1 in 2014, as part of a report on the dangers of global warming.

She said: “There is still strong heat today, August 17, 2050, with scorching sun.” A hypothetical map of France showed temperatures of up to 43°C, with 34-30°C across much of the country.

The predictions in 2014 had been “made very seriously by Météo France”, she said at the time, and it is “not fiction for 2050″. Similar forecasts had been made for other European countries.

But now, eight years later, Ms Dhéliat has pointed to the striking similarities between her predictions then and the actual predictions in France today, calling them “frightening”.

She said: “A scary forecast from Météo France for Monday! Between 40 and 42C or more, in the western regions. With an onshore wind forecast over some of these regions, [we recommend] great caution, the risk of fires remains and will remain very high. Thoughts and respect to our firefighters.

Maddening from Météo-France for Monday! Between 40 and 42° or more, in the western regions. With a land wind expected in certain regions of great caution, the risk of fires remains and remains very high. Thoughts and esteem for our firefighters. pic.twitter.com/3XkRF8Sdok

Many departments in the south of France are currently on orange alert for a heat wave from Sunday to Tuesday, with a peak expected on Monday (July 18). “Extreme temperatures” are expected on the “Atlantic arc” with maximums of 40 to 42% on the west coast, said Météo France.

37 deposits and Andorra in #vigilanceOrange

Read more: French heat wave: what temperatures should you expect this weekend?

The same similarities have been noted in the UK, with forecasts for 2050 appearing incredibly close to those expected in the coming days. The UK Met Office has issued its first-ever ‘extreme heat red alert’ in England for Monday July 18 and Tuesday July 19.

On the left is a 2020 Met Office prediction of what a 2050 summer heat wave could look like.

On the right, a BBC weather forecast made this morning, for next Tuesday.

The climate crisis is real and it is happening now. Wake up the f**k. pic.twitter.com/9ZMMIrveFY

In France, several weather journalists said they were changing the way they talk about heat waves.

In mid-June, when temperatures were already above the seasonal average, Marc Hay from BFMTV declared: “The projections that we show for 2050 have already come true. In 2019, it was a red flag, and we said it would happen in 15 or 20 years, and in fact, it’s happening three years later.

Scientists have noted an increase in heat waves in recent years. Figures from Météo France show that in France, 23 heat waves have been recorded over the past 21 years (between 2000 and 2021), compared to only 17 over the previous 53 years (over the period 1947-1999).