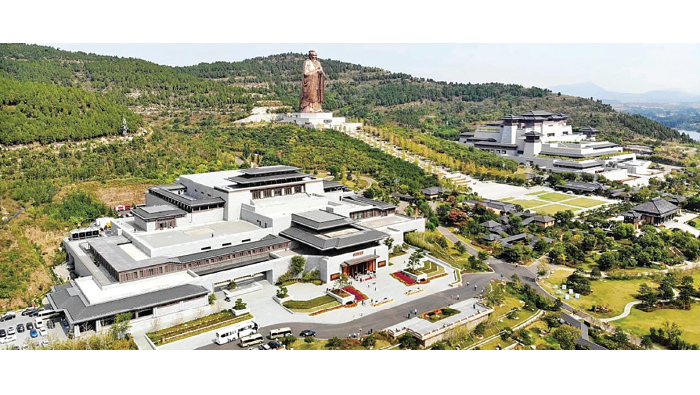 In recent years, there has been a growing appreciation of traditional Chinese fine culture among the people, especially the younger generations.

From the growing emphasis on the study of ancient literature and philosophies, the rise of the trend of Guochao, a fashion trend combining modern designs and traditional Chinese cultural elements, and the improvement of the preservation of intangible cultural heritage, the Chinese people’s passion for traditional culture is manifested in various scenarios.

These delicate gifts were produced by a seal workshop in Qufu. Song Wencong, 24, is one of the artisans.

“Most of my colleagues were much older than me when I joined this workshop six years ago,” he said, adding that more young people have joined the workshop in recent years.

“Many of them chose this career out of love for traditional culture,” he said.

Currently, the workshop produces more than 10 million seals per year, with a sales volume of 180 million yuan (about 25 million US dollars). Tu Keguo, a researcher at the Shandong Academy of Social Sciences, said traditional Chinese culture, including Confucianism, can be a source of inspiration in solving common problems facing mankind in the modern world.

“We combined the popular concept of blind boxes with cultural relics to let people experience the joy of physically digging up replicas of relics encased in the earth,” said Song Hua, director of the museum’s cultural and creative office.

In recent years, China has seen the rise of Guochao. From cultural products in museums, to television programs featuring ancient culture, to the traditional dress style of fashion shows, Guochao is visible in many ways.

JongMay Urbonya, an American living in Beijing, is passionate about Hanfu, a traditional Chinese style of dress.

She recalled that 10 years ago, when she came to China as a high school student, wearing Hanfu was still a niche hobby. Thanks to the rise of Guochao, Hanfu has gained popularity among young Chinese people, and JongMay has integrated Hanfu into her daily clothes and is able to purchase various types of Hanfu online.

“In China, traditional culture is seen not just as a story that appears on stage or in movies, but as a new fashion that has integrated into modern life,” JongMay said.

CULTURAL HERITAGE RETURNS
In a classroom at Longdong University in northwest China’s Gansu province, students put on a show — some manipulate shadow puppets with rods, bringing them onto the “stage — a translucent fabric screen lit from behind, while others play music on gongs, drums, suona horns, and other instruments.

The Daoqing Chinese shadow theater in Gansu, originating from the Han Dynasty (202 BC-220 AD), has been included in the national list of intangible cultural heritage since 2006.

The art was well received by people of all ages in rural areas. However, in the 1980s, with the popularity of movies and television shows, it began to lose its luster and many artists moved on to other jobs.

Daoqing Shadow Theater experienced a change of fortune in 2020 when Longdong University brought it into classrooms and invested in textbook compilation, talent training and repertoire innovation to promote the legacy of art. One of the students, Zhang Liang, 20, became the show’s main puppeteer after two years of practice. An innovative shadow puppet show titled “The First Shot at Longyuan”, which was performed by Zhang and her classmates, won a provincial literature and art award last year.

“The next generation should not miss these beautiful and precious arts,” she said.

Earlier this year, the university launched its project to compile textbooks for undergraduate and master’s courses on intangible cultural heritage studies.