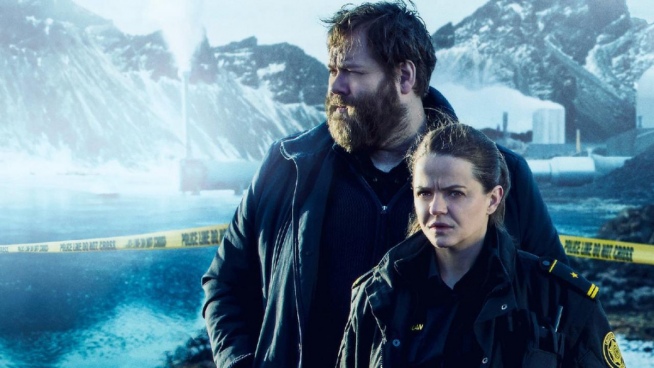 Iceland is an island of abundant volcanic activity with only 370,000 inhabitants. A natural paradise that has been chosen as the location for the exteriors of dozens of films and international series. But in recent years, particularly since the sector’s promotion policies promoted by a 2003 law which provides aid for the production of fiction in cinema, television and documentaries, it has ceased to be the exclusive destination for foreign filming to become the source of many auteur films acclaimed at festivals and also of proposals that have conquered the massive audience of the platforms streaming from around the world.

In the first aspect appear, for example, two films that the MUBI service launched this week. “Lamb”audacious, provocative and fascinating debut film by Valdimar Jóhannsson, which won the Innovation Prize in the official Un Certain Regard competition at the last Cannes Film Festival, has Noomi Rapace (the Swedish actress who played Lisbeth Salander in the original saga based on the novels by Stieg Larsson) and Ingvar (Hilmir Snær Guðnason) as a couple who live on a farm in the middle of nowhere, an area in the middle of hills so beautiful as inhospitable (especially in winter).

When the weather improves, they work with the tractor they drive and raise sheep. There are dogs, cats, horses, lambs in the place, but they live in absolute solitude. And in a decision that will change the course of their lives (and of the film), they adopt a little lamb, which they name Adaand they begin to raise him as if he were their son.

So far what we can reveal so as not to fall into frustrating spoilers. In the second half, Pétur (Björn Hlynur Haraldsson), Ingvar’s temperamental brother, will arrive on the scene, and this strange presence will invade the apparent idyll and give an outsider’s look at the matter.

The film -conceived by Sjón, the country’s most prestigious writer as a novelist, poet, screenwriter and composer and lyricist on several albums by his compatriot Björk- is quite austere, ascetic and “Icelandic” (geography and idiosyncrasy make it an adjective) with creative use of visual effects and a certain misshapen fairy tale imprint reminiscent of “Border: I felt something beautiful”by Ali Abbasi, and disruptive, surreal and fantastic elements that burst in the middle of the rural drama and refer to the cinema of Robert Eggers and Ari Aster.

The second novelty of MUBI is “Chased” (“Bergmál”), by Rúnar Rúnarsson. The director’s most recent film of “Volcano” and “Gorriones” / “Sparrows” (winner of the Golden Shell at the San Sebastian Film Festival 2015) offers a portrait of modern Iceland at Christmas. A social fresco where the chain of gags highlights the most common differences between the inhabitants of this country and which received a very good reception when it premiered at the International Competition of the Locarno Festival 2019.

From stopping a penalty against Messi to leading the police

Some compare the fashion for Icelandic (audiovisual) cinema to that enjoyed in 2018 by the football team which, in a country so sparsely populated and without outdoor sporting activity for much of the year due to very low temperatures, managed to qualify for the World Cup in Russia.

And these links between football and cinema are not capricious. Some will remember that in the 1-1 draw against Argentina Hannes Þór Halldórsson saved a penalty from Messi himself. At this time, of course, the profiles of the “filmmaker goalkeeper” intensified, although at this time he only shot a few short-lived commercials and documentaries.

As well as, Halldórsson hung up his gloves, put down his bow, grabbed the camera and surprised by creating last August as part of the International Competition of the very prestigious Locarno Festival (Switzerland) “Secret Cop”a code of satirical detective comedy that mocks the usual narrative codes of this type of story with an agent with Clint Eastwood’s pretensions who arranges everything while shooting and a villain with a model past who seems taken from “Zoolander”.

Beyond the very curious case of Halldórsson, it is not possible to tour the Icelandic audiovisual industry without putting center stage Baltasar Kormakurwho after getting noticed with feature films in his country such as “Winter hot” (2000), “A trip to paradise” (2005) and “The depth” (2012) regularly ventured to Hollywood with “Two Lethal Weapons” (2013), a combination of friends and neo-noir film starring Denzel Washington and Mark Wahlberg that includes everything from millionaire bank robberies to the presence of the CIA, FBI, DEA, military intelligence and Mexican drug cartel agents; Everest (2015), about the true story of a rugged expedition to the highest mountain in the world with Jason Clarke, Josh Brolin, John Hawkes, Robin Wright, Emily Watson, Keira Knightley, Sam Worthington and Jake Gyllenhaal; and “Adrift” (2018), survival story with Shailene Woodley.

But Kormákur did not remain in the comfort (or temptation) of Hollywood and returned to his country as showrunner, producer and director of several episodes of two notable series that can be seen on Netflix: “Trap”, a thriller starring Ólafur Darri Ólafsson -something like Icelandic Ricardo Darín- about the murders that rock a small community in a remote area amid winter storms; and “Katla”, disturbing story in a city marked by the ashes which come from a volcano and by mysterious apparitions. These are two notable forays into genres that have nothing to envy to the fashionable Nordic noir of more traditional – and much more productive – countries like Denmark, Sweden or Norway.

The force of wilderness and the psychological effects of isolation, desolation and isolation are also present in classics like “Children of Nature”, a film by Fridrik Thor Fridriksson which to date is the only one from this origin to have been nominated for an Oscar in 1992; and in other precious titles that have passed through Argentine cinemas such as “Woman at War” (2018), by Benedikt Erlingsson (the same director of “Stories of Horses and Men”); “Aries: the story of two brothers and eight sheep”a tragi-comedy that focuses on the relationship between two brothers who don’t even speak to each other in the setting of a small, isolated town and which won director Grímur Hákonarson first prize in the Un Certain Regard section of the 2015 Cannes Film Festival .

Also from the recent crop of the Icelandic career, “Vinterbrødre” / “Winter Brothers”, by Hlynur Pálmason, deserves to be highlighted, a powerful, sordid and provocative story which won the Best Actor award for Elliott Crosset Hoveen at Locarno 2017, also about two brothers who in this case they work inside a mine; “Good Neighbours”, by Hafsteinn Gunnar Sigurðsson, honored at the Venice Film Festival and Icelandic representative at the Oscar in 2019, which relies on harsh humor to tell the argument between two families over the shade caused by the branches of a tree; while offering comedic elements “The Woman of the Mountain”, a film by Benedikt Erlingsson about a farmer’s struggle against the economic interests of a powerful mafia that harms her way of life and the environment. In this reissue of the myth of David against Goliath, the comedy leaves room, of course, for political criticism with very good artistic results.