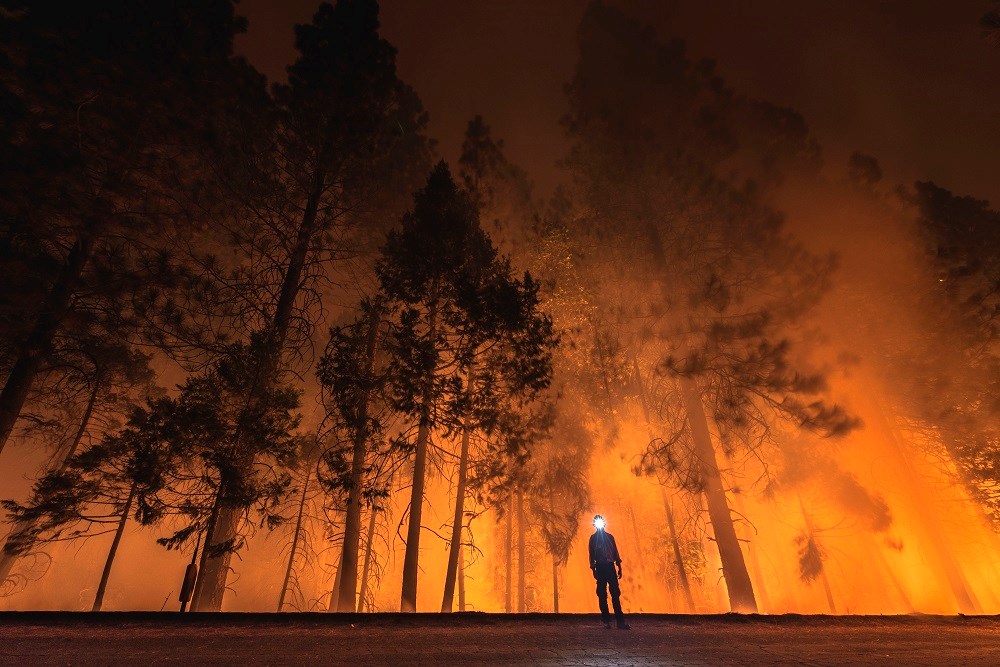 The first exhibit in the year-long ‘Climate Connections’ series aims to help people process their feelings about climate change and take action on its impacts.

Despite the devastation caused by the California wildfires, the annual fire season has arguably brought communities together. When the CZU Fire forced evacuations in August 2020, Peninsulars banded together to evacuate animals, provide food for weary firefighters and help affected residents, farmers and business owners.

What these support systems lack, however, is a method of dealing with the monumental loss caused by climate disasters. Artists across California and the West Coast couldn’t just mourn what had been lost: they felt compelled to create something of it and share their work with others.

“Fire Transforms”, an exhibition at the Palo Alto Art Center from September 17 to December 17. 10, goes further than showing the destructive nature of fire. The works on display are linked to three central and interconnected themes – living with fire, learning with fire and creating with fire – to show that the impact of a fire is life changing and long lasting. The exhibition is curated by Rina Faletti, whose personal experience with the 2017 Napa fires inspired her to turn to environmental art. Faletti works with Napa-based Art Responds to examine and curate artwork that fosters meaningful conversations about climate and environmental crises. She says that with art as a medium, it’s easier to have difficult conversations about climate change.

“Art provides a safe place of solace after the trauma of the firestorm,” Faletti said in a statement.

“Fire Transforms” is one of three exhibitions in the art center’s year-long “Climate Connections” series; one water exhibit and one earth exhibit will be featured in the spring and summer of 2023. With the Palo Alto City Council’s Sustainability and Climate Action Plan in mind, exhibits and programs “Climate Connections” audiences aim to address environmental education and awareness in an accessible and understandable way to raise awareness of the need for action. “Fire Transforms” features works by more than 20 artists working in several different mediums, many of whom have experienced the devastating effects of the Northern California wildfires over the past decade.

“Fire is destructive, but there is also this possibility of regeneration, rebirth and regrowth after fire,” says Kienzle.

The exhibition’s collection of blurry, painterly photographs depicting smoky landscapes were taken by Young Suh, a photographer and art professor at UC Davis.

“There’s an annual anxiety around the fires that has only grown,” Suh ​​says.

He photographed the “Forest Invisible” project between 2008 and 2012 during the fire season in Northern California. A group of photographs in the series documents the thick and beautifully eerie smoke blanketing the forests in the wake of a fire. The second group of images from the project focuses on fire management and containment strategies that Suh was asked to observe by the US Forest Service. By studying and photographing controlled burning tactics and inmate crews training to become firefighters, Suh gained insight into aspects of modern fire management that have become “its own industry and ecosystem.”

Maintaining an aesthetic quality of images was important to Suh. He describes his first encounter with the California fires as a “shocking” experience that involved waking up and not seeing the sun; it was “apocalyptic”. However, there was a subtle beauty to the suffocating smoke that emanates from his images.

For Suh and several other artists featured in “Fire Transforms”, it’s important to create spaces for artistic experiences in the midst of traumatic events. He hopes visitors can find solace and reflection in his images while learning about modern fire containment practices.

“Telling a story has its own healing power just by telling what happened to you. It helps you rearrange the event from your own voice, and I think images are a great tool to help with that process,” says Suh.

Documentary photographer Norma I. Quitana and her family lost their Napa home in the Wine Country fires of 2017. Quintana dealt with the monumental loss by revisiting the site where her home once stood and sifting through the rubble, trying to save all she could. A series of photographs and salvaged objects from his “Foraged From Fire” series will be displayed in the main gallery and outside in the courtyard. The recovered items will be displayed in a display case, much like artifacts would in a museum, to serve as a historical record of the damage caused by the wildfires.

The fire destroyed Quintana’s art studio and all of her camera equipment, leaving her to use an iPhone to document items found at the site by placing them on one of the black gloves she wore to sift through the ruins. While Quintana says most people wouldn’t return home after the fire, she found it to be a therapeutic experience.

“Art allows you this channel for the breath; it became the way to negotiate the loss of my house,” says Quintana.

Other artists featured in “Fire Transforms” create works that directly educate and inspire climate activism. Los Altos artist Linda Gass specializes in textile art about California’s water and land use issues. The Palo Alto Art Center will display “Severely Burned: Impact of the Rim Fire on the Tuolumne River Watershed” by Gass in the main gallery.

The article documents the destruction of the Tuolumne River watershed by the 2013 Rim Fire, as 96% of the burned area was within the watershed. In “Severely Burned”, Gass stitched the fire vegetation burn severity map and topographic map of the area onto a piece of silk to demonstrate that the Rim Fire burned the area so badly that the actual topography of the watershed was now visible from above due to the absence of trees.

“I want people to think about not only the destruction of forests, plants and wildlife habitat… What else are these fires doing to our environment?” Gass said.

In addition to showing works that invite visitors to learn and reflect on their experiences with climate-related natural disasters, the art center will partner with a local nonprofit organization at each exhibition in the Climate Series. Connections, fundraising for the featured organization as well as visitor education. about the steps they can take to tackle climate change on a more individual level.

To further the dialogue about the impact of climate change on the peninsula, EngageOn, a Palo Alto-based climate awareness nonprofit, has partnered with the art center to create an interactive map of Palo Alto that shows specific locations subject to environmental effects related to climate change. Visitors can learn how areas like the Baylands and the foothills could change as global warming progresses.

“What we’re learning through the utter disaster of the wildfires is that we can see ourselves going through this as a globe and locally… We can all be part of the healing,” Faletti says.

“Fire Transforms” runs from September 17 to December 17. 10 at the Palo Alto Art Center, 1313 Newell Road in Palo Alto. The center will host an opening reception with the artists on September 23 from 6 to 8 p.m. On October 23, visitors are invited to participate in Family Day and learn about fire prevention and safety from a local fire crew. The artist talks will take place on Zoom on November 18 and December 9.

The exhibition Inspired by Fire: Palo Alto Art Center features artists who felt compelled to create after the destruction of a wildfire and who first appeared on The Six Fifty.