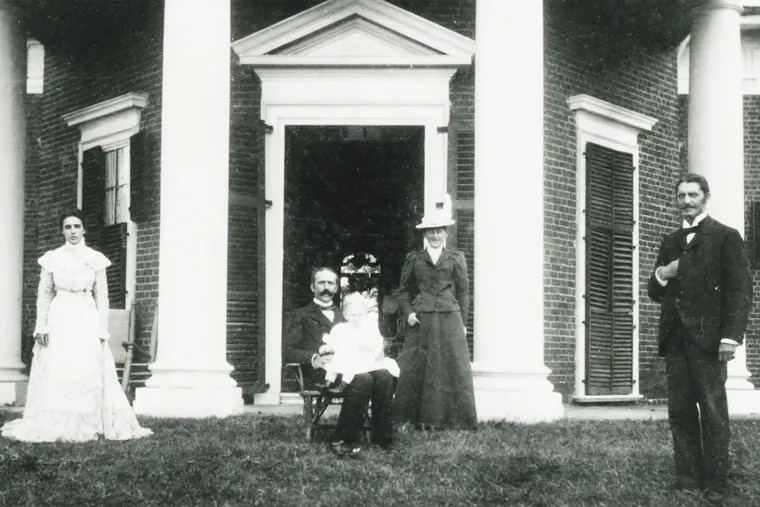 A Jewish family from Philadelphia owned and restored Monticello, the Virginia Plantation and home of Thomas Jefferson, for nearly 100 years in the 19th and early 20th centuries. Their ownership of the monument is the subject of a documentary at the 42nd Philadelphia Jewish Film Festival, November 12-17.

The Levys of Monticellodirected by journalist-turned-documentary filmmaker Steven Pressman, will screen on Sunday, November 13 and Monday, November 14. Pressman has already made 50 Children: Mr. and Mrs. Kraus’ Rescue Missiona documentary about a Jewish couple from Philadelphia who saved children during the Holocaust.

After Jefferson’s death in 1826, his Monticello estate in Charlottesville, Virginia was purchased in 1834 by Uriah Levy, a Philadelphia native and naval commodore. (A statue of Levy stands at Philly’s Congregation Mikveh Israel in the Old City.) Levy faced anti-Semitism during his time in the Navy, once punching someone in the face after being abused, and was a ardent defender of religious freedom.

Levy was inspired by his stewardship of Monticello, in part because he was a great admirer of Jefferson. While vehemently advocating freedom in some respects, Levy, like Jefferson, enslaved people. Exploring that dynamic is a key part of the documentary — a bigger part, Pressman said, — than he expected when he started.

“I have to admit that my own thinking as a filmmaker evolved as I made the film,” he said.

“As I immersed myself in the project, I realized that you can’t tell a story about Monticello without touching, in a very meaningful way, on the story of slavery. It’s woven in the fabric of Monticello, both in the days of Thomas Jefferson, of course, but as I learned, also during the years when Uriah Levy owned Monticello. [Levy] people enslaved (and acquired more during his years of owning Monticello), I realized I had an obligation to highlight this part of the story.

There are records of at least 20 former slaves fleeing Monticello between 1769 and 1819. Jefferson freed only seven people – two during his lifetime, five in his will.

Levy, a Union Loyalist, died in 1862, leaving Monticello to the American people in his will. The estate was seized by the Confederate government during the Civil War.

“I always knew, when I was making the movie, that it had this modern relevance,” Pressman said. “In this retelling of the history of the Levy family, their ownership and the preservation of Monticello, and what they experienced, it was a means of shedding light on anti-Semitism, both as as it existed in their time, but as it continues today.” The deadly white supremacist The Unite the Right rally in 2017 took place just six kilometers from Monticello.

Following two lawsuits and a gruesome campaign to remove the Jewish family’s stewardship of the estate, Jefferson Monroe Levy, Uriah Levy’s nephew, took control of the estate in 1879 and restored it. . In 1923, he sold it to the Thomas Jefferson Memorial Foundation, which managed it as a historic site and tourist attraction.

This year’s Philadelphia Jewish Film Festival opens on November 12 with Moshe Rosenthal Karaokean Israeli film about a long-married couple whose lives are turned upside down by the arrival of a stranger, and ends November 19 with America, the pastry chef, director Ofir Raul Graizer’s melodrama about an Israeli swimming coach returning home after the death of his father. Other highlights include a brunch and movie program dedicated to the 1968 film Barbra Streisand funny girland that of Sandrine Kiberlain A radiant girl, a French film about an aspiring Jewish actress in Nazi-occupied France. There is also a full program of short films.

“So many people think that a Jewish film festival is just about Holocaust films and Israeli films, but that’s not the case,” said Matthew Bussy, program director for film and film. Philadelphia Jewish Media, which organizes the festival. “Yes, we like to show them because they are both very important, but we really want to show films that show another side.”

The Philadelphia Jewish Film Festival, which has changed its name and location in recent years, is back to a full in-person festival this year, after going online-only in 2020 and hybrid last year. The Weitzman National Museum of Jewish History will host the opening and closing nights; other programs are planned for Kaiserman JCC, Gratz College, Ambler Theater and Arden Theater.