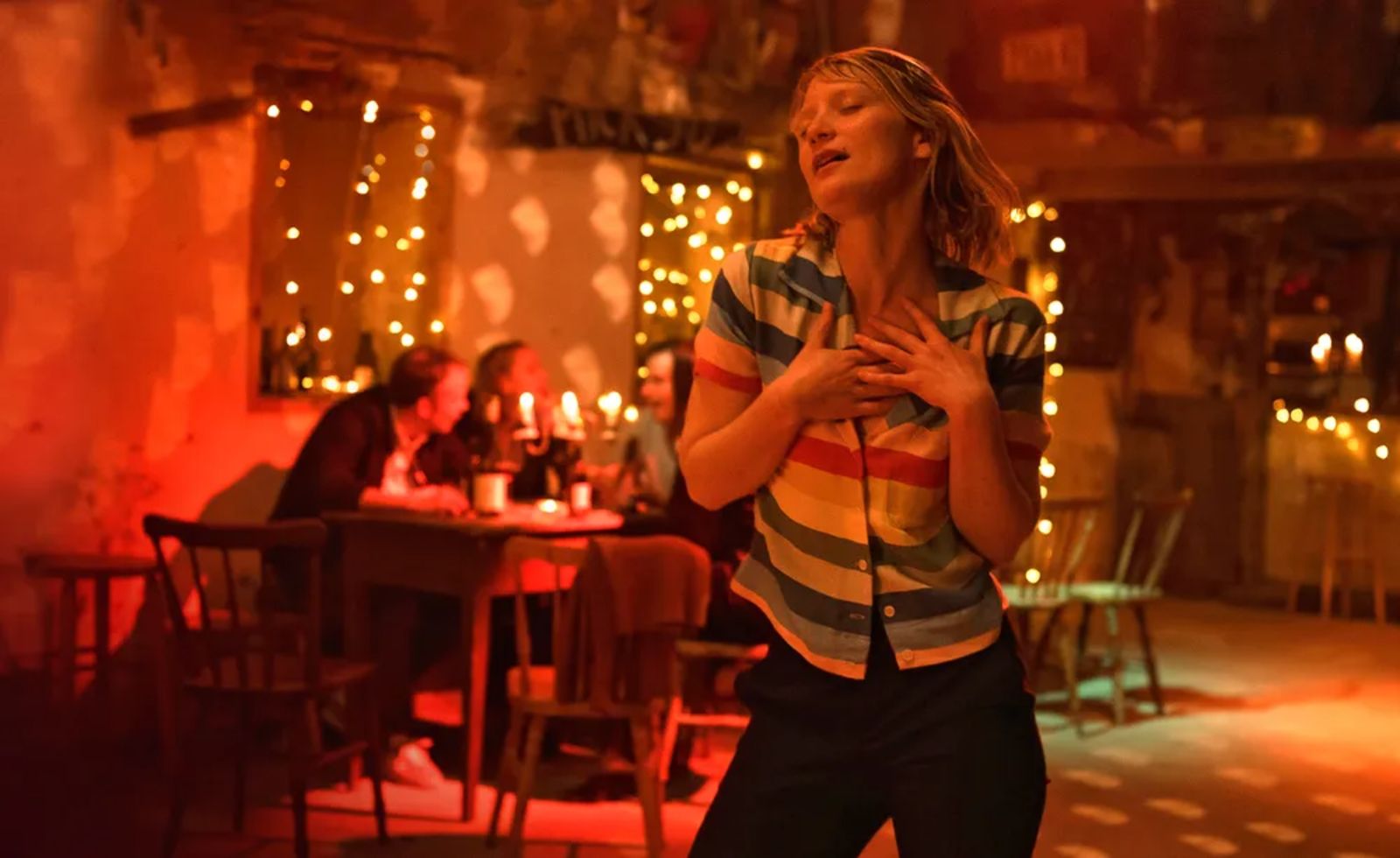 Following The Film Stage’s collective Top 50 Films of 2021, as part of our year-end coverage, our contributors are sharing their personal 10 lists.

After more than 14 months without cinema, 2021 has finally marked the return to theaters. The first comeback movie – something every movie buff will forever have etched in their memory – wasn’t one I was expecting much, but one that really entertained: Guy Ritchie’s deliciously wicked B-movie Man’s anger.

While the rest of the movie year had its highs (seeing nearly 40 films at the 59th New York Film Festival, being among a crowd never happier to experience the collective cinema all over again) and lows ( the uncertain future of the arthouse market as they try to find a place in the Disneyfied world), 2021’s film production certainly wasn’t lacking in quality.

Looking at new releases, there are a number of movies that just missed my top 15, including The French Dispatch, What do you see when you look at the sky?, Days, The Beatles: Get Back, Annette, West Side Story, Siberia, Procession, The Power of the Dog, The Inheritance– the list continues. As for my favorite early viewings, here’s a list of my favorites, topped with a tie between Olivier Assayas’ perfect double feature demon lover and Abel Ferrare New Rose Hotel.

Without further ado, you can see my top 15 below and if you’re wading through the heavy waters of Letterboxd’s list, here’s my ranking of all movies watched in 2021 and a look at 2022.

Overturning with defiance and love certain expectations that a fourth Matrix the film would simply be another legacy that is in line with what came before, that of Lana Wachowski Resurrections is as bold and exuberant as a blockbuster can be these days. Tracing a beautiful romance guideline from the 1999 original to new heights here, Keanu Reeves and Carrie-Anne Moss deliver some of the most touching performances of the year, trapped in a state of Dougie Jones-like monotony. with deep love being the only way out. Any Sense8 Obsessively knew this wasn’t going to be a run-of-the-mill sequel, but Wachowski managed to surprise more with a meta-calculation of the state of the tents and if she even wants to be involved in what the Hollywood game has become at all. .

It’s always a little strange to choose a film that I haven’t seen since the previous year, but John Gianvito’s His socialist smile was one of my favorite discoveries from the hybrid edition of the New York Film Festival in 2020. The director eschews documentary conventions, removing the expected sensory elements to deliver an informative and moving chronicle of an often overlooked side of Helen Keller . Rewriting a sandpaper story of Keller as found in textbooks, the documentary paints a picture of his revolutionary spirit and decisive actions for social equality. By taking on the form more akin to a book, the documentary doubles as a corrective to perceived history, letting Keller’s radical opinions speak for themselves, without misinterpreted commentary.

Seven movies, it’s becoming increasingly clear that Mia Hansen-Løve will probably never make a movie that I don’t like. The introspective, heartbreaking, beautifully performed Bergman Island pairs beautifully with another complex look at the filmmaking process as it goes, Joanna Hogg’s quietly breathtaking sequel Remembrance Part II. While in the former, the characters of Vicky Krieps and Tim Roth have more of a foothold in the industry, they are still plagued by the same creative frustrations and dilemmas as the burgeoning film school student. of Honor Swinton-Byrne in the latter. Both present formal and structural bets that almost had me gasping in awe, somehow avoiding all the clichés about the creative process.

at Theo Anthony All the light, everywhere sets a broader focus than his entirely original debut rat movie while maintaining the same unique vision as it explores how technological breakthroughs (and pitfalls) in filmmaking have reverberated through history to both embolden and deceive our perceptions of perspective. To thread these strands and see its modern effects, his film primarily examines the engineering behind police body cameras, the extensive use of these devices and other surveillance equipment to support officers in cases where evidence could otherwise be reduced to verbal testimonies. Stunning in its expressive yet concise ability to explore such an urgent topic as rampant police violence and over-surveillance from a strictly technological perspective, all light forces viewers to question the veracity of everything that crosses their eyes. Read my full review.

A masterclass in simplicity, Céline Sciamma’s most beautiful work to date follows an eight-year-old girl who begins a brief stay in her mother’s childhood home, following the death of her grandmother. While it’s best to hide all extra plot details, Little mom comes across as a tender investigation into the fleeting experiences of youth and how the process of adulthood can shatter a sense of wonder about the world. Before viewing, you might think Sciamma can’t break your heart in just 72 minutes, but the effect is quite the opposite as she makes every precious second count, culminating in one of the finales. the most moving of the year.

After a stellar body of early work, Christian Petzold has garnered more attention with Phoenix and Transit, and his last, Undine, finds him at the height of his powers to immediately take his audience on a spellbinding journey. In this mythological melodrama, the German master’s touch is orchestrated to a perfect degree, imbuing every note with an ideal amount of uncanny mystery. There was no more romantic scene in a film this year than Paula Beer in a negligee rehearsing a speech on urban development to a passionately transfixed Franz Rogowski in his underwear.

4. The worst person in the world (Joachim Treves)

As Hollywood relegates romantic comedy to cheap Netflix productions, leave it to Norwegian director Joachim Trier to reinvent the genre with plenty of warmth and inventiveness, plus a necessary desperation streak. Directed by Renate Reinsve in a breakthrough performance for the ages, The worst person in the world traces the capricious romantic adventures of his character through 12 chapters, a prologue and an epilogue. Far from the potentially weighty experience the structure suggests, Trier exudes a melancholic and charming vision through each section, from an endlessly endearing encounter to a devastating and relatable look at how his daily obsessions can end up seeming trivial. with a new perspective on life. It’s a charming and magical film that reaffirms the promise that Trier showed in his early feature films.

After admiring his work for 5:30 a.m. in 2015 happy hour, it’s still a bit surreal that Ryusuke Hamaguchi has achieved such widespread levels of acclaim over the past few months. Despite only becoming a more adept filmmaker, one might not have guessed that a relatively sedate three-hour adaptation by Haruki Murakami would be a consensus pick for Best Picture of the Year. Nevertheless, it is a pleasure that expectations have been subverted: drive my car is a stunning work, scaling the full spectrum of human emotion in the story of a widower’s regrets, memories and artistic motivation in the editing of a new adaptation of Uncle Vanya. Hamaguchi and co-writer Takamasa Oe eloquently expand on Murakami’s short story, which is less than 40 pages, retaining its poetry and finding a gripping pace to let the naturalistic drama play out. It’s rare that a film of such magnitude never hits the wrong note, but Hamaguchi once again pulls off such a feat.

Paul Thomas Anderson has the uncanny ability to make every moment of his films feel completely unexpected while still conveying a lucid emotional undercurrent through it all. Returning to a more episodic structure similar to his best career work, inherent vice, Licorice Pizza is perhaps the best example of this quality, telling the exuberant story of a summertime crush that surprises at every turn. An uninhibited comedy on the surface, there’s unsettling darkness layered on different levels – from misogyny and racism to bonding out of desperation, where societal norms are shunned to settle with the only someone who seems to make you happy. A bright and bold piece of work which, like the recent series of PTA films, I think will only be more rewarding on future viewings.

Ryūsuke Hamaguchi’s first masterpiece of the year, Wheel of Fortune and Fantasy, is an infinitely playful and inventive triptych. Exploring the thorns of love, sparks of connection and mistaken identities across three stunning vignettes, Hamaguchi’s skill at crafting dialogue that is as entertaining as it is moving has never been so sharp. Every day my favorite of the three shorts changes, but there’s certainly no funnier or more surprising sequence in theaters this year than Revenge Gone Wrong between Nao (Mori Katsuki) and Professor Segawa (Shibukawa Kiyohiko) . Rohmer’s true heir has arrived.

Check out our best comprehensive coverage of 2021.