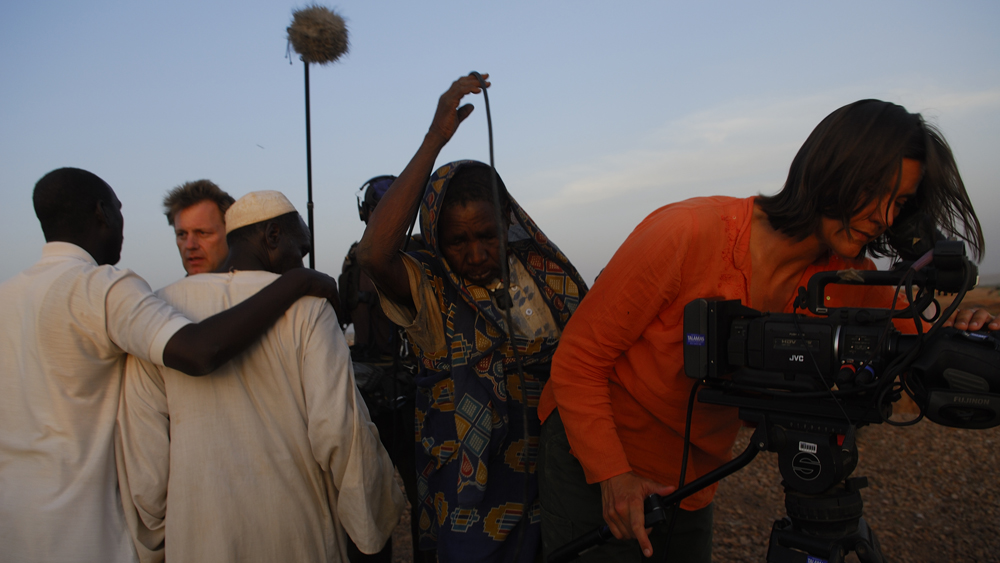 Opening her masterclass at the Visions du Réel documentary film festival in Switzerland, cinematographer and filmmaker Kirsten Johnson – winner of an Emmy and a Sundance award for “Dick Johnson Is Dead” – began by naming each member of the technical team on set.

“What I often find annoying with cinema is that we forget to recognize all the people it takes to make these moments together. I learned that as a cameraman, and I’m interested in understanding why. we want to narrow it down to one person, because there is something beautiful about all of these humans, collectively, helping us to be here today,” she said, using her favorite word for describe his work, “Cameraperson”, which is also the title of the second feature film.

For three decades, Johnson worked on some sixty films as director of photography, for Michael Moore (“Fahrenheit 9/11”, winner of the Palme d’or in 2004) and Laura Poitras (“Citizenfour”, winner of the 2015 Oscar for Best Documentary Feature), has directed a few short films and two feature films: the aforementioned “Cameraperson” in 2016 and “Dick Johnson Is Dead” in 2020.

“I’m very happy to be the ‘alone’ today,” she continued with characteristic self-deprecating humor, “but I throw it back to the community to say we’re creating this moment together.”

Johnson had set the tone for the masterclass. Dressed in a flamboyant multicolored outfit, she went on to talk about her obsession with color, which she says is matched only by her obsession with death – a fixation that prompted her to direct her second feature. “Dick Johnson Is Dead” footage. in which she repeatedly stages her own father’s death in inventive and comedic ways to help them cope with the inevitable.

She then shared a slideshow of images that inspired her – ranging from works by Saul Steinberg – “one of my favorite artists” – to a self-portrait she made when she was five years old in which she drew herself in bright colors. outfit similar to what she wore on stage – “I’m basically that person and always have been, nothing has changed!” – much to the amusement of the public.

More seriously, while the festival‘s artistic director, Emilie Bujès, encouraged Johnson to talk about her career, the director of photography confided: “What I would say, and it’s true for all of us, is that we all have a long list of things we care about, and as life goes on, it gets longer and longer.

Johnson explains how his curiosity turned into a form of travel binge, taking him to 87 countries over 25 years. This is where she drew the material for “Cameraperson”. But it was a long process before she allowed herself to make the film she did – a montage of scenes from her previous films as a cinematographer, with all its imperfections, which lays bare the dilemmas and the contradictions that cinema entails, and which, in the title sequence, she asks viewers to see her memoir.

As the editing process evolved, it turned into what she described as “a very slow psychological excavation of the material”.

“I didn’t just choose 25 years of material. It was one situation after another, almost like geological sedimentation. The great thing about [my editor] Nels Bangerter said “You can ask all your questions – if pictures can ask the questions, then you can ask the questions.” He didn’t put any limits on me,” Johnson said, adding, “One of the things I do with ‘Cameraperson’ is go, ‘I don’t know if it’s okay.’

“I’m trying to figure out how to give you clues, as an audience, to understand that you’re about to encounter something that might bother you – it bothered me. I don’t want to remain in my isolation around the fact that when I make films, I have a world of ethical questions. Let’s not pretend it doesn’t happen.

It is this same desire to recognize the reality of the world around him that motivated him to make his second film, “Dick Johnson Is Dead”. This happened after her mother died after years of dementia as her father began to show early signs of the syndrome.

“People thought I was crazy,” Johnson said. “I knew time was limited. They kept saying, ‘Why do you want your father to die again and again?’ It took me a long time to understand: because I want to bring it back to life, I want it never to die, and cinema can help me keep it. The cinema allowed me to do that and it’s happiness: Dick Johnson is still alive, and the film gave us a way to be together and have fun.

Asked about her current projects, Johnson said she was working on a hybrid documentary-fiction about American writer and political activist Susan Sontag – “I’m going to try to make a fun film about Susan Sontag, good luck to me!”, She joked.

She also spoke of her desire to address “a set of questions about 21st century cameramen.”

“Ten years ago I thought we were going to have an explosion of cinematic languages, but I don’t feel like that’s happening,” she said.

“Machines are starting to film us, surveillance cameras are filming us, drones are filming us, and a lot of the entertainment that’s happening – big superhero movies, franchise movies for studios – is getting more and more no longer filmed without bodies, without physical space or cameramen: we are moving towards a world of virtual production,” she said, where machines “come for us in the form of algorithms.”

“The system is not configured to support certain types of surveys, and the machines will block us more and more. So the question is: what do we do with it, ”she concluded.