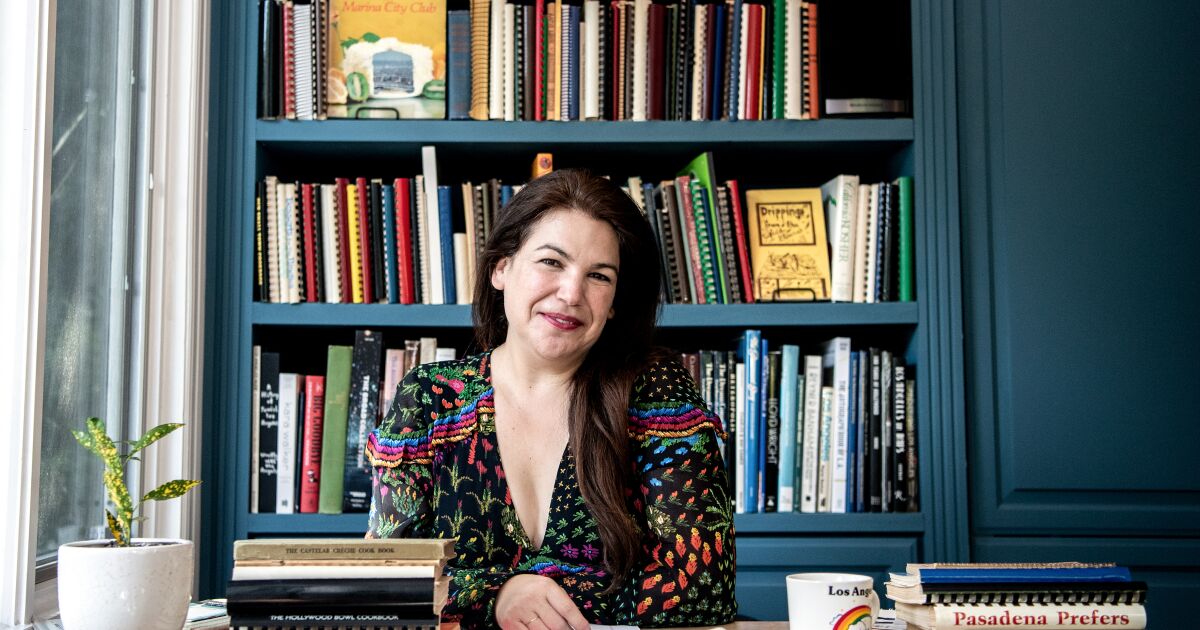 “It’s ‘The Castelar Creche Cook Book,'” artist Suzanne Joskow said on the porch of her Hollywood home one recent morning. Gently holding the weathered century-old green hardcover, she explains that two dishes she has prepared, the California chews and the Van Nuys fruit cocktail, are taken directly from this relic.

The book was published the same year his house was built, in 1922. Chews, page 217, look like granola bars and are a deliciously chewy combination of dates and nuts. The fruit salad, on page 22, is diced and tossed in Maraschino liqueur.

“You can time travel,” says Joskow. “This recipe could have been eaten here a hundred years ago.”

Originally published as a fundraiser for LA’s “Homeless Baby Home,” a center for newborns that operated in Los Angeles in the early 20th century, “The Castelar Creche Cook Book” is an incredible artifact of LA’s culinary history. It is now part of Joskow’s growing collection of vintage community cookbooks called Community Cookbook Archive: LA. In addition to collecting and archiving these books, Joskow has set out to cook and photograph many recipes that might otherwise fall into the dusty recesses of local history.

“Sometimes they’ve been sitting in the store for 20 years,” says Joskow, whose visual art has previously focused on maps of historically significant places in Los Angeles. “I found them so interesting as documents. Once I started having this group of them, I realized it was this amazing image of Los Angeles over time, historically.

Often buried in the bottom of boxes at estate sales or in second-hand bookstores, the books come from all over LA County and date as far back as 1894, and total nearly 400. The open archive is now featured in the framework of the “Something in commonexhibit at the Los Angeles Central Library, which features a wide range of community groups in the city, and will be on view through early November.

“You get a snapshot of all of these simultaneous experiences of place,” says Joskow. “The way people eat and the way people talk about their food speaks volumes.”

Joskow will discuss many cookbooks in a virtual conference on Thursday afternoon at the Central Library.

Upon entering the dynamic exhibition space of the library’s Getty Gallery, visitors can see Joskow’s work featured prominently. Ninety-nine carefully selected cookbooks line the walls. At first glance, it’s a cheerful display of charming relics perched against a bright orange wall. Many have hand-drawn covers and plastic spiral binding. The archive as a whole, like an impressionist painting, reveals a richer picture of Los Angeles, with each book a brushstroke or pixel in the city’s larger historical narrative.

One of the most apparent themes is that these cookbooks contain mostly women’s recipes.

“A lot of them were female-focused because women were excluded from so many places,” Joskow says. “So a lot of these groups are kind of women’s responses to spaces they weren’t a part of, or things their husbands did that weren’t accessible to them. So the woman created a kind of auxiliary to this.

She gives the example of “Mission in the Kitchen,” from the Air Force Officers Wives Club, published in 1963, which features recipes such as tomato aspic with pickled vegetables – a bright red bundt-shaped gelatin surrounded by cold pickled vegetables. Others include the Downey YMCA’s “Y Wives Cookbook” from 1968, “Cop’s Cookery: Wives of Los Angeles Police Officers” from 1977, and “Hints to Housekeepers” from members of the Woman’s Relief Corps, many of whom were wives of veterans. of the Civil War, from 1907.

“Cookbooks were often fundraising tools that women sold to their friends,” says Joskow, noting that women’s groups needed to be creative in fundraising while men’s organizations might have access to more traditional types of capital. “Because home cooking was so often the domain of women, cookbooks were compiled, shared, and sold among them, often as fundraisers, either for a group of women or as a fundraising arm. fund for women from an institution like a church.”

The foreword to “Desserticide: Desserts Worth Dying For,” a book compiled by the mystery writers group Los Angeles Chapter of Sisters in Crime, for example, declares a mission to “combat discrimination in the realm of mystery, educate publishers and the general public about the unequal treatment of women authors.

“Men show up in cookbooks sooner than you think,” says Joskow, noting Charlie Chaplin’s contribution to the book “Celebrated Actor-Folks’ Cookeries,” a fundraiser for the Red Cross in 1916, one of many Tinsel Town-focused cookbooks. .

“I think a lot about Hollywood as a physical place that is Los Angeles, and of course Hollywood as some kind of fantastic idea,” she says, pointing to the Hollywood Bowl cookbooks from 1984 and 2002, with picnic-ready recipes. like applesauce and cornmeal muffins. Joskow made the muffins and brought some to the summer music venue with the cookbook — because she likes to put the books back on their original sites.

Artists and industry professionals feature throughout the collection, with recipes from people like pioneering actress and producer Mary Pickford in the cast of the 1997 film “Soul Food.”

In addition to highlighting the influence of show business, the archives shed light on Los Angeles’ obsession with so-called health foods. Numerous cookbooks document early thinking about raw food and vegetarianism, as well as an appreciation of Los Angeles as a hub of a bountiful West with an abundance of agricultural products.

“Our understanding of LA at the forefront of food and health has a very long history,” says Joskow.

One of the best examples is a book called “Diet for Health”, a compilation of recipes sent to Philip M. Lovell for his LA Times column “The Care of The Body”, from 1928. It includes recipes focusing on health and pages dedicated to almond, coconut, oat and soy milk recipes.

Yes, alternative milks were made in Southern California about 100 years ago.

The books also reveal insights into issues of racial and cultural misattribution. “There are a lot of euphemisms and deliberate mixtures of ‘Spanish’ and Mexican origins in the recipes. You see it, all the way back to [a] Cookbook from 1905. There are sorts of Spanish recipes, some of which have Spanish origins, and some of which are sort of a deliberate Europeanization of Central American food,” says Joskow.

There are Lakers cookbooks from 1985 and 2001, with recipes, if not from the players themselves, from some of their wives and mothers.

The only completely unattributed book, “The Gay of Cooking”, from 1983, is written under the pseudonym “The Kitchen Fairy and Friends”. Filled with humor, innuendo and proven recipes, the anonymity of its alleged gay author reflects the times. “This is a time when it might have been dangerous to include contributors’ names,” Joskow says in a video of the exhibit.

Each book is a time capsule. And although they remain behind a glass enclosure, Joskow hopes they will come to life through the kitchen. That’s why she has made all cookbooks available for viewing and cooking online, through her website. communitycookbookarchive.org.

“More often than not, these types of books are not recorded and preserved in any official archive, whether it be an academic or civic institution, such as this one,” says Todd Lerew, director of special projects at the library. , who curated the “Something in Common” exhibition. “So it’s pretty rare to see them come together in the spirit of preservation and study.”

Lerew developed the concept for the exhibit in 2018, before the pandemic.

“Although it was difficult to delay the exhibition, at the same time it took on a whole new meaning,” says Joskow. “Because we’re all so much more aware of how we come together and the value that has.”

Join Suzanne Joskow for a live virtual lecture on the LA Community Cookbook Archive on Thursday, September 15 at 4 p.m. as part of the LAPL Something in Common exhibit. More info here: https://www.lapl.org/whats-on/events/cookbook-archive