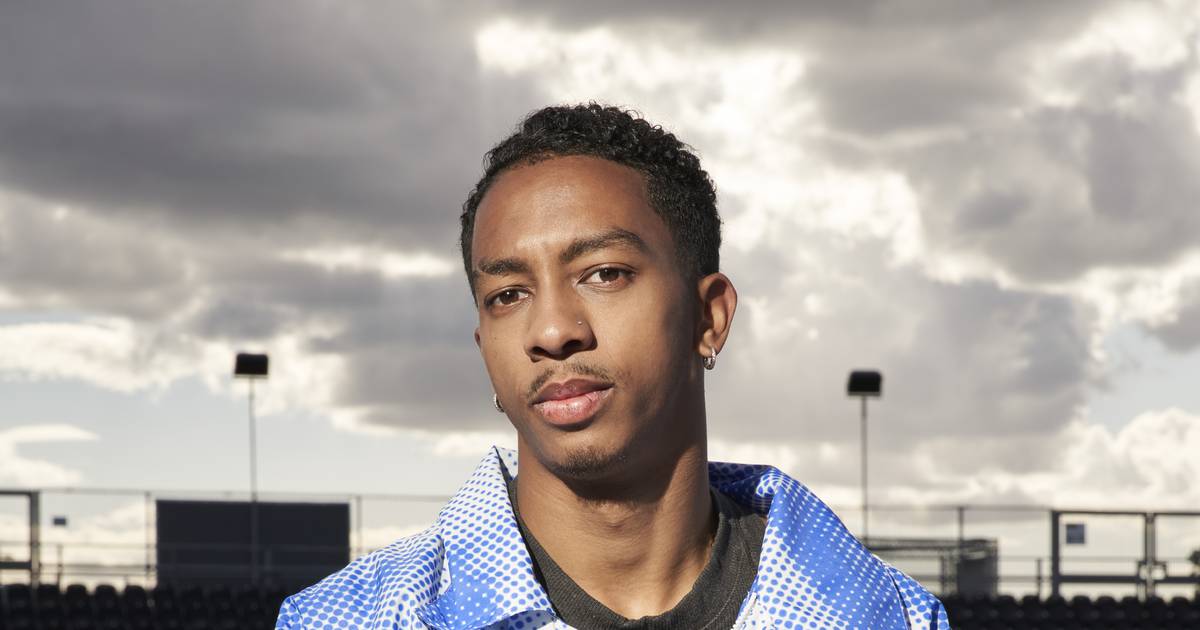 LONDON – On a crowded shelf in Saul Nash’s crowded studio, a kitschy little trophy takes pride of place. He won it for his voguing at the Technicolor Kiki Ball last year. Usually, he walks for House Revlon, one of the legendary houses on the main stage of the ball. The Kiki scene is younger and Nash participated as “007”, meaning he is not affiliated with a Kiki house. He won his prize by walking “the old fashioned way”. Anyone who saw Willi Ninja, the godfather of voguing, in the 1990 documentary “Paris Is Burning” will know exactly what it means, with all of its intricate and thrilling choreography.

Movement is the key that unlocks Nash and his work. His grandparents were Guyanese, his mother is Bajan. He grew up in London in a house full of music. He danced as soon as he could walk. If you need to attach a label to the collections he’s been presenting since graduating from the Royal College of Art in 2018, sportswear – clothing for movement – is a start.

Nash never stopped dancing. He has a parallel life as a choreographer. His label’s logo is a mirror image of his first name, partly because he didn’t feel 100% sure about putting his name on the product at first, but mostly because “it’s the dancer’s story; the dancers always practice in the mirror and when you look in the mirror it reads SAUL.

During the long months of confinement, Nash combined fashion and dance in films directed by his partner Fx Goby. One of them, “Twist”, featured a confrontation with a street gang. Two antagonists approach each other, looking at each other sinisterly. You wait for the knife… but then they kiss, tenderly. “Twist” was a turning point for Nash, personally and professionally. He describes it as “this idea that you assume one thing but your expectations are completely twisted”. Just as his own expectations were twisted when the friends he feared would never come to terms with his sexuality turned out to be totally supportive.

He compares his work to therapy. “It helps me overcome some things. Sometimes I realized why things were the way they were while collecting. Like ‘Twist’ for example. It was probably something in my subconscious that was constantly happening, and by making this collection it got resolved. I guess every season I design a different collection, it’s all part of one investigation. So you might be wondering about his latest, which launched on Monday as part of the digital-physical hybrid that is London Fashion Week this season. It’s called ‘Siblings’ and, if last season’s key visual was an abstract image of the Guyanese flag, this time it’s a shot of Saul and his older brother.

The collection is infused with the spirit of the clothes Nash’s brother, uncle and their friends wore when he was growing up. The 90s. Sean Jean. Tea towel. “I am looking for sports references. I had a terrycloth tracksuit. We always used to go to Wood Green and buy them. SAUL is chosen as a caterpillar, just like SEAN JOHN once was. What is new is the materiality, the aerodynamics, the restraint that refines the excess of P.Diddy in a new vision of activewear.

Her workspace is courtesy of the Somerset House residency program. He originally planned to use it for his dance practice. At that time, his fashion studio was very far east, in Stoke Newington, near his factories. “I had this crazy idea that I could be two people, choreographer and designer.” But over the past year, two have become one at Somerset House, as Nash’s brand has increased sales by 150%. He lost his Japanese business during the pandemic, but he has more than made up for it with new customers, especially in the UK, where Selfridges and Browns are among the stores carrying SAUL. Its factories are no longer just down the road. Now they are in the Netherlands for wool knits, in Portugal for nylon and in Turkey for jersey knits. Indeed, as we speak, his assistant arrives from Turkey with two suitcases of samples for “Siblings”.

The growth spurt is relative, as Nash started small. And there is still only him, production assistant, trainee and freelancer. In April, he won the Woolmark Prize, endowed with 200,000 Australian dollars (about $145,000), and the company has finally reached a point where Nash can pay people, himself included. But one thing he says won’t grow is the size of the collections.

For “Siblings,” he collaborated with Sheep Inc., a fiercely eco-conscious brand that has successfully produced seamless knitted garments. It’s their innovation, but it’s one he’s been eager to explore since his days at the RCA. As he unpacks the Sheep Inc. samples, he gazes at the back wall of his studio, hung with pieces from his early collections, and marvels, “I never would have thought back then, when everything was nylon, that it would ever be what’s inside. my hand right now.

On the other hand, there is Nash’s commitment to sustainability. He is aware of the contradiction that is “sustainable fashion” in a sector that advocates overconsumption. “Fashion is about creating more and more, so it’s impossible for it to be 100% sustainable. I encourage people not to think about trends but about something they could keep. That’s why you need to make it a very good quality product.

Preparing for its Woolmark submission allowed Nash to discover the innovative and sustainable properties of the world’s oldest fiber. “When you’re making sportswear, there’s always that fine line between man-made and natural fabrics. Wool made a lot of sense to me because it’s a way of introducing a natural fiber into my range that is biodegradable and has moisture wicking properties so it works for sports.

In his research, Nash discovered that it was difficult to use 100% merino wool. It is usually blended with polyester or nylon to make it stronger and stretchier. But he worked with Knitwear Lab in Amsterdam to find a pure wool fiber that was both durable and super stretchy.

He also collaborated with Sheep Inc, a fiercely eco-conscious brand that succeeded in producing seamless knitted garments. It’s their innovation, but it’s one he’s been eager to explore since his days at the RCA. As he unpacks the Sheep Inc. samples, he gazes at the back wall of his studio, hung with pieces from his early collections, and marvels, “I never would have thought back then, when everything was nylon, that it would ever be what’s inside. my hand right now.

Nash studied dance in school, then joined a youth dance company when she was 17. “The plan at that time was to be a dancer, but I always had this conflict between art and design and dance, which drove me to study performance.”

While studying for a BA in Performance Design and Practice at Central Saint Martins, Nash was also on stage with Avant Garde Dance under renowned choreographer Tony Adigun. “I absolutely loved creating a narrative in a space with the human body.” At the same time, he realizes that his work with costume and friendships with comrades like Ibrahim Kamara leans more towards fashion than performance. “I wanted to create something that didn’t just exist in a performance space. I was looking for something that was more out there, in the world.

I don’t mind wearing a tracksuit to the Fashion Awards.

His first application for a master’s course in menswear design at the Royal College of Art was unsuccessful. “But Zoe [Broach, the RCA’s head of fashion] remembered me and after I didn’t come in she sent me an email that said something like “As a saxophonist needs to know their music, you have to go and learn the keys” this that was the best advice I’ve ever had. Nash left, taught himself to sew, took a portfolio prep course, and returned for a second interview with a dancer, who performed in an outfit he had made. He was accepted.

“The circle was complete at the Royal College,” he says now. “One amazing thing about Zoe is that we didn’t really show any clothes in a fitting, it was a performance for my whole mastery. It made so much sense to get all my friends together, to dress them up and make them dance. That weird progression where I came from was really nurtured and encouraged. I knew it might be really hard to get a job in this thing that I created, but it was what I had to do.

At the time, Nash wasn’t thinking about transforming sportswear. “He re-addressed the narrative around him, making it seem like there were contexts to deconstruct.” When he was younger, he felt weird wearing tracksuits to parties. “Now I can get it back. I don’t mind wearing a tracksuit to the Fashion Awards.

Nash often refers to masculinity. A curious thing that I noticed is that he always talks about men, never about boys. His older brother, uncle and their friends were the men around him as he grew up. The young dancers in his troupe are men, never boys. “I tell my story through men because it’s the story I relate to,” he muses. “Even though the men in my work look young, I can see that they are adults. To be a boy is to tap into adolescence. My clothes are for men.

“But I’m also aware of being in a voguing house that there are non-binary people, there are women, there are trans people, and there are people who identify with the male spectrum but that doesn’t aren’t necessarily male. And I think that’s an interesting thing to unpack in masculinity. I find issues with toxic masculinity, it drives me crazy. I think that’s such a dangerous thing. It’s probably why it’s important to me to paint men through a different lens as well; to show that there’s a sensitivity within.

A few hours with Saul Nash is a recharge. The audacity, energy and optimism of a young designer on the rise are so palpable that it is almost useless for him to declare: “I love what I do and what I do is my life. And life is too short to get bogged down in negativity. “That’s how I am, very positive. Yes, as business is difficult to manage, but you always stay positive.

“Zoe always said flow like water,” he adds with a laugh. “I think it’s from Bruce Lee.”

How did Slavoj Žižek become mainstream?