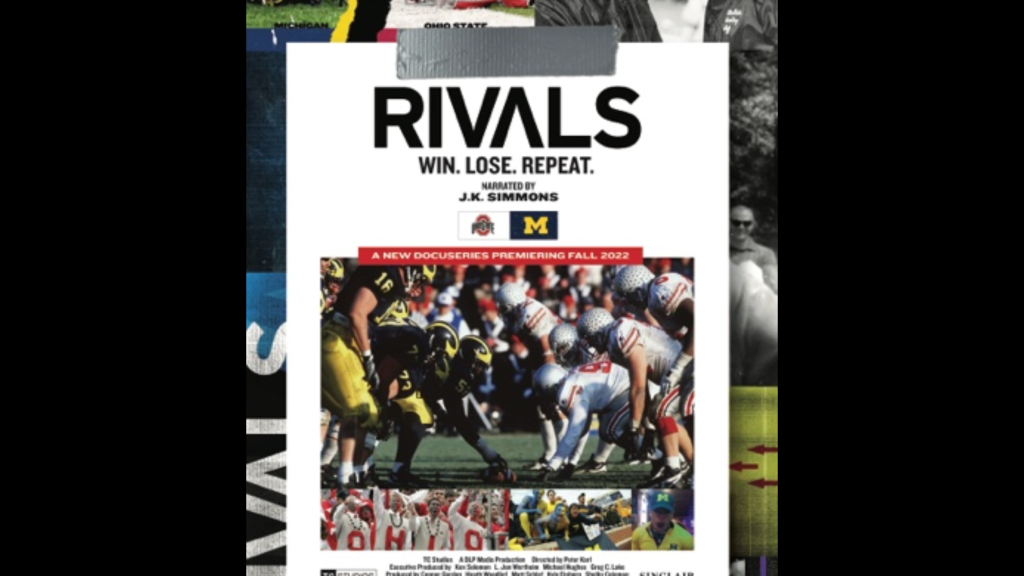 What is a rivalry? A new series tries to answer it.

No, not just which teams are rivals, but why are there rivals? What are the sociological foundations that create such a concept?

In 2008, HBO tackled the Michigan football rivalry with Ohio State, aka “The Game,” but we’ve been 13 years since its release. While it dug into how much each program hates the other, as well as many of the lore that comes with The Game, RIVALS digs much deeper.

Each school has plenty of time to deepen the tradition of the individual program, but it starts with the Buckeyes, particularly the Woody Hayes era, but quickly transitions into Bo Schembechler’s tenure in charge of the Wolverines.

However, while it examines the “Ten Years War,” it also delves into the sociology of how each team made the other better. But it moves more between sociological foundations than it follows chronology.

This documentary presents a large part of the already well-known anecdotes, but it is rather complete. It certainly doesn’t cover everything, but it does offer something very different from previous iterations.

What certainly makes this documentary different is that it has more modern elements. Yes, this is significantly addressing “the place,” as well as Jim Harbaugh and Urban Meyer taking over each institution. And it also covers Michigan’s 2021 victory.

RIVALS is nearly 90 minutes long and you’ll be glued to the TV for each one.

RIVALS will premiere Saturday, Nov. 5 at 4 p.m. ET on Bally Sports Great Lakes and Bally Sports Ohio. The two-hour film will also debut on Bally Sports Detroit 5 p.m. ET Saturday. The documentary will be rebroadcast throughout the month on these platforms.

Today, Sinclair Broadcast Group and Tennis Channel Studios (TC Studios), in partnership with Emmy Award-winning DLP Media Group, announced that they have produced a new documentary special, RIVALS. The film will dive deep into the high-profile college football game between Michigan and Ohio State, providing viewers with unique perspectives from legendary players, sportswriters and announcers, scientists, historians and Moreover. It was created in collaboration with Jon Wertheim, Tennis Channel reporter, CBS’ 60 minutes corresponding, Sports Illustrated lead writer and author. RIVALS will premiere Nov. 5 on multiple regional Bally Sports networks and run throughout the month on a wide variety of Sinclair and other platforms, with a national premiere on Tennis Channel Nov. 20 at 7 p.m. ET (website with info on the schedules below).

RIVALS is set to debut throughout November on Bally Sports’ Regional Sports Networks (RSN), Bally Sports+, Marquee and YES Network, as well as broadcast stations Sinclair, Tennis Channel and Big Ten Network. In all, the documentary will be broadcast more than 350 times. Thanks to its expansive distribution approach, the film will air immediately after NBA, NHL and other highly watched events on RSNs and stations, which often dominate their local markets in terms of viewership. Michigan and Ohio State – both members of the Big Ten Conference – are due to play Nov. 26, after which RIVALS will work on Big Ten Network.

“The opportunity to create and share this special came from the unique ability to program on Sinclair’s stations and RSNs, a game adjacent to some of the most-watched live competitions across the country,” said Ken Solomon, President of Tennis Channel. “Although it’s a sports documentary, at the end of the day, it’s unlike anything anyone has ever seen. RIVALS is about people and our society, why sport matters to so many people and how competition drives us to excellence. And what better rivalry to explore that than through one of the greatest of all time? »

RIVALS takes a comprehensive look at the history of two of the best Division I football programs in NCAA history. Narrated by Oscar-winning actor JK Simmons (who was born in Michigan but remains a rabid fan of Ohio State), the show gleans insights from more than 30 other people whose lives have been equally affected by the endless struggle between the two schools. . Among them are Archie Griffin, the only two-time Heisman Trophy winner; legendary players Dan Dierdorf and Keith Byars; broadcasters Rich Eisen and Joe Klatt; historians Jack Park and John Bacon; and seasoned reporters from the markets of Columbus, Ohio and Ann Arbor, Michigan, the state homes of Ohio and Michigan, respectively. The two-hour documentary reveals the science behind what makes a sports rivalry so compelling, how the match repeatedly delivers biting performances and why it has historically been revered as The Game.

The film marks the Tennis Channel debut from production studio TC Studios and is the network’s first documentary for a sport other than tennis. The RIVALS concept stems from the success of the Emmy-nominated network strokes of genius in 2018, also a collaboration with Wertheim and based on his previous book of the same name. strokes of genius examined the long-standing rivalry between tennis legends Roger Federer and Rafael Nadal. RIVALS widens the scope to college football and an equally fierce annual stalemate.

“As we created strokes of genius we realized we were telling more than a tennis story,” Wertheim said. “The movie was less about the competition between Federer and Nadal and more about how they were better at having to face each other over and over again at the highest level, which is exactly what we see with Michigan and Michigan football. “Ohio State. We really appreciate the help of both schools with this project, as well as the Big Ten Conference and the Big Ten Network.

Sinclair Broadcast Group supports the launch of RIVALS with a partnership with direct distributor Valpak, which will promote the film to 3.1 million homes in Michigan and Ohio by the end of October. Also this month, one minute RIVALS trailer will work in approximately 1,000 medical facilities, car dealerships and retail outlets in the United States. The company will also host watch parties in Columbus and Ann Arbor.

Additional information on RIVALS can be found at RivalsDocuseries.com. The website will feature updated program schedules, a channel finder, program promotions and prize opportunities.