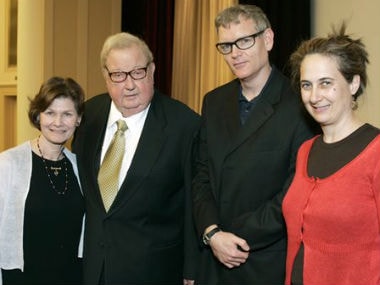 Filmmaker Robert Drew, a pioneer of modern documentary and the spontaneous style known as cinema verite, has died at the age of 90.

Filmmaker Robert Drew, a pioneer of modern documentaries who, in Primary and other films have mastered the intimate and spontaneous style known as cinema verite and formed a generation of influential directors, including DA Pennebaker and Albert Maysles, who have died at the age of 90.

His son Thatcher Drew confirmed he died Wednesday at his home in Sharon, Connecticut.

From 1960 with Primary, Drew produced and at times directed a series of television documentaries that took advantage of innovations such as lightweight hand-held cameras that recorded sound and images. With the newly discharged filmmakers, non-fiction films no longer needed to be carefully staged and awkwardly narrated. Directors could work more like reporters, following their subjects for hours and days and capturing revealing moments.

Filmmaker Michael Moore said Wednesday that Drew, along with Pennebaker and Richard Leacock, “helped tell real stories through the film.”

“Modern art has Picasso. Rock-n-roll has Bill Haley. And documentary film has Robert Drew,” Moore said. “All of us who make non-fiction films can trace our lineage back to what he created.”

Dozens of Drew Movies Included The chair, a 1963 documentary about a death penalty case in Illinois, and 784 days that changed America: from Watergate to resignation, 1982 recipient of a Peabody Prize. Many of his films were edited and co-produced by his wife, Anne Drew, who died in 2012.

In this photo provided by the Academy of Motion Picture Arts and Sciences, Anne and Robert Drew, left, join Ed Carter and Grace Guggenheim, right, at an event in his honor at the National Archives in Washington, DC. PA

While a photographer and editor for Life, Drew formed Drew Associates in 1960 with the goal of applying his magazine experience to films. Among those who joined were future directors like Pennebaker (Do not look back, The war room), Maysles (who with his brother David made Give me shelter and Gray gardens) and Leacock (Happy Mother’s Day).

Their approach, called cinema verite, or direct cinema, has also been used in feature films, by directors John Cassavetes, Louis Malle and Agnes Varda. And the new style led to fierce and enduring debates about the truth in the movies – whether an on-the-fly approach was more objective than a narrative with a point of view worked out in advance.

Award-winning documentary filmmaker Frederick Wiseman would call the cinema of the truth “just a pompous French term that makes absolutely no sense.”

Drew Primary is widely ranked among the most significant political documentaries and, in 1990, was listed in the Library of Congress National Film Register for Historical Works. It follows presidential candidates and their fellow Democrats Senators Hubert Humphrey and John F. Kennedy as they campaigned in Wisconsin for their party’s nomination, which Kennedy ultimately received.

“Kennedy asked about how it would work. Was I there to look for him? He didn’t use those words, but it was his question,” Drew later explained. “I told him that we weren’t partisan of either side and that we would edit fairly, and for this to work he would have to trust me. He looked at me for a long time and said, ‘If I don’t call you. by tomorrow it’s gone. ‘ And he didn’t call, and we were on. “

In 1963, Drew and his associates made Crisis: behind a presidential commitment, about the confrontation between the Kennedy administration and the governor of Alabama, George Wallace, who resisted a court decision to integrate the University of Alabama. The filmmakers had remarkable access – from the White House to Attorney General Robert Kennedy’s office at the Alabama college campus, where a defiant Wallace stood in a school door, inside Wallace’s car then that he warned that the next presidential election would be decided in the South.

Audiences weren’t used to seeing a sitting president filmed on the job, and some critics criticized Drew for turning the White House into a movie set. “The White House is not Macy’s window”, a New York Times the editorial complained.

The New York Herald Tribune added: The “president has no business in show business.” Pennebaker would break up with Drew after “Crisis” alleging the film was edited for President Kennedy’s benefit. Pennebaker also believed that Drew used storytelling too much, which Pennebaker and others would drop.

Drew was born in Toledo, Ohio, in 1924, and at 19 he joined the Air Force, flying 31 missions in Italy and surviving after being shot down in Germany. Abroad, he would be deeply impressed by war correspondent Ernie Pyle, whose detailed reporting shaped Drew’s cinema.

Drew’s documentaries covered a variety of topics, including Duke Ellington and the Space Explorers, but he had a special affection for Kennedy. The filmmaker would remember the president telling him that he should spend enough time with him that he didn’t even know he was there. The system worked so well that Kennedy almost undermined his own foreign policy.

“He forgot about us so completely that at one point he was talking about joint maneuvers off Cuba,” Drew said. “The country had not yet entered Cuba. A general who was there must have reminded him that there was a camera in the room filming. He looked at me and smiled. smiled back and we walked out. “