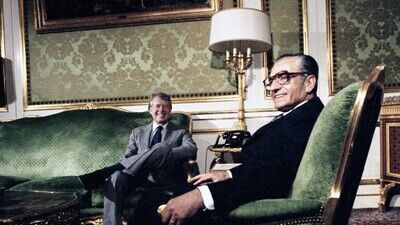 I know many Americans at the time shared my rage and frustration. It was in the news almost every day. Nightly reports on an ABC-TV show that became “Nightline” stoked agonizing emotions, which only piled on the anger and shame felt by many Americans when Vietnam fell four years prior. What caused this new nightmare, which seemed to come out of nowhere?

Of course, that was not the case. The crisis over the Iranians holding 53 Americans hostage was just the culmination of a drama that had been unfolding for decades, and it is one of the most bitter ironies of the modern age that, even considering given all the resources and immediacy of modern media, Americans knew little of this story in 1979, and perhaps not yet.

That’s why Robert Stone’s four-hour, two-part documentary “Taken Hostage” (airing Nov. 14-15 on PBS, then streaming on PBS) is such a welcome fix. It’s the second of two documentaries about the hostage crisis to hit US television this season; the first, the four-hour “Hostages,” aired on HBO in September. Both films are well worth your time. In some ways, “Hostages” offers a better, more detailed account of those painful 444 days, in part because it devotes nearly all of its four hours to the subject. But as the show’s review by Brian Tallerico noted, its first hour offers only a very sketchy account of the Crisis’ story. That’s what makes the first two hours of Stone’s film so significant and revealing in comparison: it’s the best, most comprehensive, and clarifying documentary I’ve seen of how America’s actions toward the Iran from the 1950s led to the tragedy that would drag the two countries down in 1979.

The key figure at the start is Iranian Prime Minister Mohammad Mossadegh, a man revered by many Iranians. Iran had emerged from World War II relatively unscathed, even though its huge oil reserves were controlled by the British. After coming to power in 1951, Mossadegh moved to nationalize the oil industry, a change that was both financial and symbolic and almost universally supported by Iranians. Mossadegh made history when he went to the United Nations to advocate for countries like his controlling their own resources, a bold proposition that earned him the nomination Time magazine’s Man of the Year.