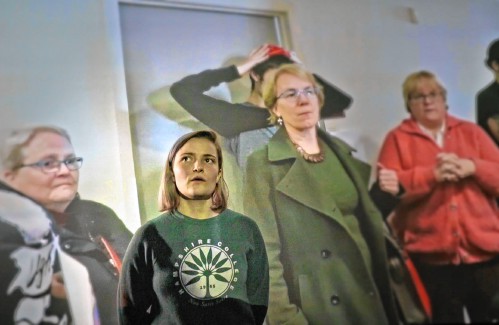 AMHERST – It was a story that quickly left the pages and television screens of local media to attract the attention of The New York Times, The Washington Post, The Atlantic and other national media sources: Hampshire College, the experimental and progressive liberal arts college founded in 1970, was facing a financial crisis and may not be able to continue as an independent school – or continue at all.

The story of the Hampshire dilemma, which first surfaced in January 2019, took on even greater prominence as students, rejecting calls from college officials to cut school operations, occupied the office of then President Miriam ‘Mim’ Nelson and demanded that she fight harder to preserve Hampshire’s independence and unique educational mission.

And after students occupied his office for a record 75 days – the longest sit-in in American college history – Nelson quit, leading to new school management and a a concerted fundraising effort among alumni to put the university back on a firmer footing. .

This story of determined activism is revisited in an energetic new documentary film, “The demolition of a collegewhich was directed by Hampshire graduate Amy Goldstein and tells the story largely from the perspective of several students who joined the sit-in in Nelson’s office and led the resistance to his plans, demanding greater transparency on college decisions. .

The film, presented by Zeitgeist Films and Kino Lorber, two New York film distribution companies, takes its name from a late 1960s book, “The Making of a College”, which served as a model for the establishment of Hampshire College.

Fittingly for a college where students design their own curriculum, Goldstein’s film, which debuts Feb. 11 in New York and arrives at Amherst Theaters Feb. 17, makes extensive use of video shot by students, as well as images from students’ social media threads. This makes for a cinema verité approach that also includes news footage, radio shows and films that Goldstein and his team shot on location during the crisis.

Interviews with Hampshire students, faculty, staff, alumni – including the college’s most notable graduate, filmmaker Ken Burns – and some whistleblowers help flesh out a story that Goldstein, in a recent telephone interview, called it a “great example of democracy in action” but also one that seemed “just a little crazy”.

“When I first heard about what was happening (in Hampshire), I just didn’t understand it,” said Goldstein, a veteran filmmaker who lives in California and attended college in the late 1970s and early 1980s. “It was really hard to figure out what was going on.

“We heard about these terrible financial problems, but there doesn’t seem to have been any effort to raise funds,” she said. “No one (from the college) approached me.”

As reported by the Gazette and other media sources, the first public notice of Hampshire’s woes came on January 15, 2019, when Nelson, who the previous year had become the college’s seventh full-time president, announced that the school was looking for a long term. “strategic partner” to help with finances – and that Hampshire may not admit a new class in autumn 2019.

Over the next few weeks, several employees were laid off and others were told their jobs would end this summer. The Gazette revealed that Nelson had spoken since the previous fall with the University of Massachusetts at Amherst about the potential absorption of the campus by UMass, and early-admitting high school students received a letter telling them that would be welcome in Hampshire in fall 2019 – but could not live on campus or eat meals there, and other college amenities might not be available.

“It was the most bizarre letter ever issued by a higher education institution,” Margaret Cerullo, a sociology professor in Hampshire, says in the film.

Escalating issues have drawn more student protesters into the ranks. “It became more real to us that there was a lot that was hidden from us,” student Marlon Becerra told Goldstein. “And in that moment we realised, ‘This is more than a financial crisis – it’s also a political crisis. ”

Goldstein studied film at New York University after leaving Hampshire and has directed and produced feature films, documentaries and music videos. She said she decided to investigate the uproar at her old college after coming to a film festival in Salem in early 2019 where some of her work was being screened.

The students had already occupied Nelson’s office for about 10 weeks when Goldstein and her team arrived on campus, and it wasn’t until days later that Nelson announced she was quitting, “so our timing was pretty lucky.” , Goldstein said.

She says she was also lucky because the first student she met was Joshua Berman, a film student who had filmed much of the action on campus since Nelson made his first announcement on Hampshire problems.

Berman “was really helpful,” noted Goldstein, making her a compilation of what he had filmed so she could keep up to date with events. Watching this also helped guide her own approach to filming the students, she said.

“I wasn’t really interested in doing on-location interviews, at least not right away,” she said. “I wanted to get a sense of what (the students) were feeling and going through, to see what they were doing.”

Goldstein would return to campus later that year for additional talks with students and staff, as well as Hampshire’s new president, Edward Wingenbach, who took office in August 2019.

Goldstein originally thought she would make a short film about Hampshire, but ‘The Unmaking of a College’ is actually around 84 minutes long – and it’s a better film for it. Interviews with students including Berman, Becerra and Rhys MacArthur help provide insight into the importance of Hampshire’s self-directed education model to them, in turn inspiring them to fight to keep the university independent.

And interviews with staff and faculty help highlight the emotional roller coaster many on campus were riding. Cheri Butler, the only remaining employee at the Hampshire Admissions and Advancement Office after nine other staff members were made redundant, looks shocked as she speaks with Goldstein: “Even though I was prepared for this. .. I feel like the ground is shifting beneath us.”

But Salman Hameed, a professor of integrated sciences and humanities, spoke to Goldstein shortly after Nelson’s resignation, and he flared up: “She picked the wrong university to play with because Hampshire is designed for protest!”

Ken Burns also speaks to this dynamic with a particularly amusing line, recalling his days as a student in Hampshire: “I remember being in the president’s office, but I can’t remember why. I mean, it’s just in our blood.

Goldstein says she had no intention of making some sort of “rah-rah movie” to celebrate Hampshire; his documentary includes interviews with a number of higher education watchers who talk about the severe financial challenges many small liberal arts colleges like Hampshire face today. And in that sense, the film delves deeper into discussions between UMass Amherst and Hampshire about a possible partnership.

John Buckley runs a Washington, D.C. communications firm that was hired by Hampshire at the time to help shape its public relations strategy. In Goldstein’s film, Buckley, a Hampshire graduate himself — he’s also a nephew of the late William F. Buckley, founder of the conservative National Review — argues that on the question of a potential merger, UMass essentially forced Nelson to empty his university so that the university would “look like the hero coming to save Hampshire”.

Although Nelson absorbed many brickbats in Hampshire, Buckley says he feels sympathy for her. ‘I saw a woman who was trying to do the right thing and got caught, made mistakes’ but made her controversial decisions because she thought she was close to closing a deal with UMass — only for the university to hastily back down and leave its hanging when merger talks became public, Buckley says.

“I think John had things he wanted out of his chest,” Goldstein said.

She also said that she had made several attempts to get feedback, both while on campus and over the past two years, from UMass and Nelson for her film, but that she remained empty (a graphic near the end of the film mentions this). “I really wanted to make an objective film, and I especially wanted it to have Mim’s voice. I did my best to bring his point of view.

Even so, “The Unmaking of a College,” which will begin a full Amherst cinema run from February 18, offers an often uplifting — and fun — look at a critical period in Hampshire College’s history and how ethics of the school in student engagement has played an important role in helping to right the ship.

As Goldstein says of the student protesters, “I was really impressed with what they did and how they behaved.”

The Amherst Cinema will offer a special preview screening of “The Unmaking of a College” on Feb. 17 at 7 p.m., which will include a Q&A with Goldstein, Hampshire College students and faculty, and the Gazette reporter Dusty Christensen.

Steve Pfarrer can be contacted at [email protected]