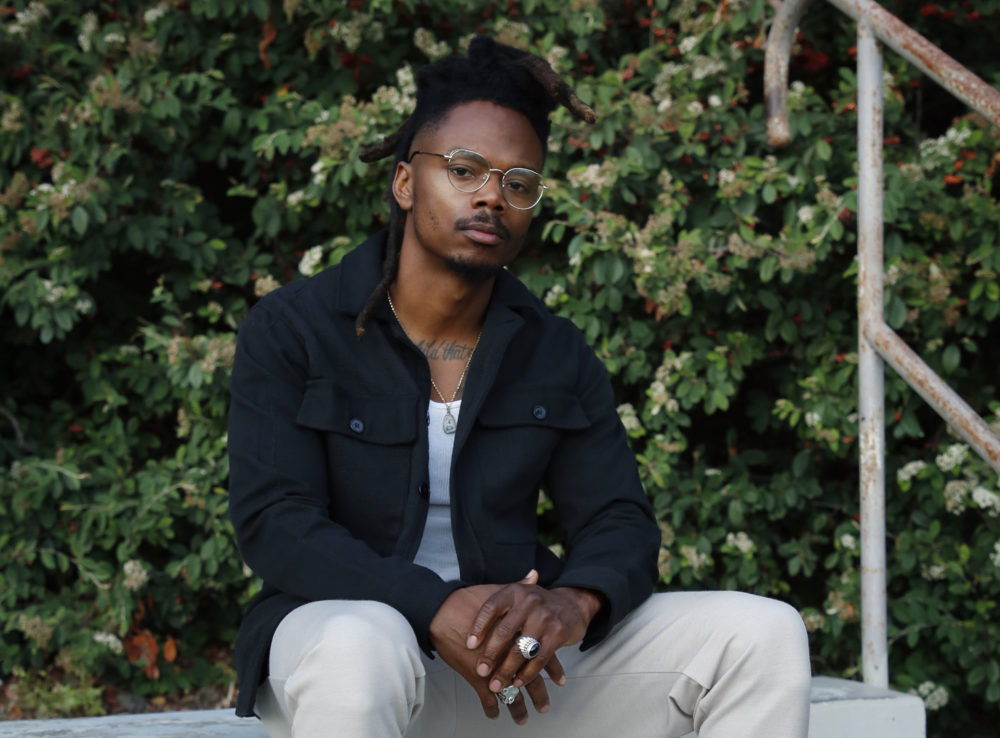 One of the most eloquent cinematic stories told on the big screen at this year’s Oakland International Film Festival is Oakland filmmaker Adrian Burrell’s unorthodox documentary, “Game God.” It is a collection of stories of ghetto life tied together by a highly political, mystical and poetic narrative that critically and artistically analyzes the state of black life under the yoke of capitalism.

“Game God” is a not-to-be-missed 19-minute short documentary for movie lovers that makes you think. The filmmaker, Adrian Burrell, and I have taken the time to do this exclusive Q&A on his politically powerful offer to OIFF, which will be screened twice during the festival – once on Friday September 16 at the University Holy Names at 5:30 p.m. and Wednesday, September 21 at 9:15 p.m. at the Grand Lake Theater. Discover the very clever filmmaker Adrian Burrell in his own words.

JR Valrey: What inspired you to write an experimental film like “The Game God”?

Adrian Burrell: I was inspired by all of the nuanced life experiences I had growing up in Oakland, being in academia, and traveling the world. Throughout my life, I have come in contact with different moral compasses, not only within myself but in the world around me.

Given that, I wanted to explore those ideas of right and wrong and what they had to do with capitalism, poverty, and how I grew up in East Oakland; and that’s where the gods of the game come from. It’s an investigation and an indictment at the same time.

JR Valrey: What prompted you to tell the story the way you did, in a very unorthodox way?

Adrian Burrell: I chose to tell the story in a way that I felt would subvert the linear, subvert the idea of ​​time in its natural state, and what’s supposed to come next, because in black experience we live in this cyclical time that is repetitive and littered with disaster, and littered with breaks in that disaster that allow for joy, rebellion and escape. I wanted to create a film that didn’t allow for an easy ending, but rather created more questions than answers.

JR Valrey: How was the creative process behind writing this film? Do you write daily?

Adrian Burrell: It’s a hybrid film; it is a documentary with narrative aspects. The narrative aspects are performed by Dr. Ayodele Nzinga. When I approached her about my idea for this film, I presented the themes and ideas that I wanted to involve in the film. She came back with something in terms of storytelling, and we swapped notes until we came to something that we both agreed on, and that’s where the storytelling comes from.

I wanted to take on and charge a system that has been trying to destroy my people for hundreds of years. . .

As far as the writing as it relates to baptism and all these metaphorical images that come out of me trying to figure out ways to represent this idea of ​​capitalism, black spiritual experience and black market economies in a way visual – and then put these metaphors to each other to see what issues are revealed.

I was also in graduate school at the time, in the Department of Art and Art History at Stanford, and this was my thesis film. I had gone through months of writing treatments and pre-interviews, trying to get things straight, and when we decided to film, we did.

JR Valrey: How did you choose the cast for this film? Did you already know the actors?

Adrian Burrell: This is a documentary film. Some people act and some just talk about their own lives and experiences. I screened the film in my community; they are friends, cousins, uncles, friends of friends and cousins ​​of cousins. It was just a case of contacting them and seeing who would be interested in something like this and who was willing to share their story.

JR Valrey: Where did you come up with the idea of ​​using legendary poet Ayodele Nzinga’s eloquent social and political monologue as the narrative throughout the film? What feelings were you trying to evoke?

Adrian Burrell: I wanted to create this idea of ​​investigation and indictment. I wanted to castigate and indict a system that had been bent on destroying my people for hundreds of years, and at the same time I wanted to inquire about dreams and nightmares, heroes and villains, and recontextualize this idea of ​​who becomes the hero, and who should be the villain.

Many of these things are fiction; the system is supported by fiction.

That’s what we were doing with the monologue. At the same time, we work with this idea of ​​the crook and the crossroads goddess, and let Dr. Ayodele really sit at that intersection.

JR Valrey: What do you hope viewers leave after watching this movie?

I think depending on where you come from in life, your experiences and who you are, you’re going to come away with totally different things. Depending on what level you are willing to go to, there is something for everyone.

JR Valrey: Why did you take the time to do such a detailed analysis of the effect of capitalism on Black Amerikkka? Why was this a major part of the story?

Adrian Burrell: As a child, I saw a lot of things I couldn’t explain, family members struggling with drug addiction, friends killed, living in public housing. As I got older, I learned about these different systems and how they directly related to the way I grew up, how the people living in the comunidades of Rio de Janeiro live, and how the people living in the apartments of Cape Town in South Africa live.

It is modified and distorted by these systems of racial difference and capital. Once I realized that, I was like, “That’s wild.” It all makes sense, and at the same time, it doesn’t make any sense at all. I felt like as an artist, it’s something I’m always trying to grapple with and go deeper with.

Growing up for better or for worse, the ability to look and listen could be why I lived another day or not.

I wanted to share this quest and this curiosity. I think it’s important for all of us to keep asking questions and pointing fingers at those systems that are mystified and asking those questions to demystify power. Many of these things are fiction; the system is supported by fiction, and if we can demystify those fictions and deconstruct them as a community, then maybe we can build something different.

JR Valrey: What effect does Oakland have on you as a filmmaker?

Adrian Burrell: There’s something about the dirt here in Oakland, literally and metaphorically. I think growing up in a place that was so heavily impacted by the great black movement out of Louisiana in the 1920s, 30s and 40s, the Black Panthers and my multi-generational family, Oakland taught me to move at worldwide. I could watch, I could listen.

Growing up for better or for worse, the ability to look and listen could be why I lived another day or not. This hyper-awareness has created a sensitivity to life, to people, to circumstances that I bring with me, behind the camera.

I think if I hadn’t had some great experiences – and some very dark ones – growing up in Oakland, I wouldn’t have had that sensibility. I think a lot of times when people tell stories about black people from that socio-economic perspective, because of the elitism of that industry, it’s very unlikely that someone with that sensibility is behind that camera.

JR Valrey: When is your film showing at the Oakland International Film Festival? Where?

Adrian Burrell: The film premieres at the Oakland International Film Festival on September 16 at Holy Names University at 5:30 p.m. and September 21 at 9:15 p.m. at the Grand Lake Theater.

JR Valrey: How can people follow your work online?

Adrian Burrell: There is a link to email me on my website, adrianburrell.art. You can find me on Instagram at @1.living.

JR Valrey, journalist, author, filmmaker and founder of New World Black Media, heads the Oakland office of SF Bay View. He can be attached to [email protected] or on Facebook. Visit www.BlackNewWorldMedia.com to know more.