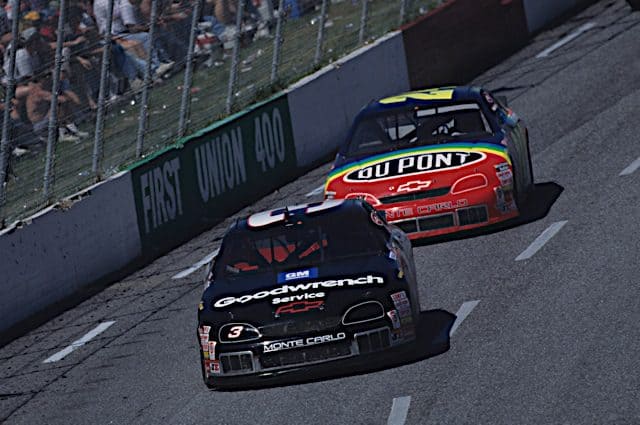 Japan’s motorsport history resembles an iceberg, from which Takuma Sato and Kamui Kobayashi peek out above the waves.

Just below the surface of these waves, less visible to the outside world, are the Super Formula and SuperGT. The Japanese answer to the F2 and GT3 class.

Further down, where sunlight is scarcer, are the All-Japan Road Racing Championship and D1GP, a motorcycle and drifting series, respectively.

A little further down the iceberg is a three-year span of NASCAR racing in Japan.

Japan doesn’t scream NASCAR, even with the American influence that settled into Japanese culture after WWII. Fuji Speedway was originally planned to be built as a Talladega-style superspeedway by the Japan NASCAR Corporation, before funding dried up and the project was taken over by Mitsubishi in 1965.

Fuji was completed as a permanent road course, and the idea of ​​NASCAR in the Land of the Rising Sun languished for nearly three decades.

Until 1994, when Suzuka Circuit Director Hiromishi Suzuki paid an unannounced visit to NASCAR headquarters and suggested that NASCAR take advantage of the growing popularity of Suzuka Circuit and hold an exhibition in Japan.

After an inspection visit to Suzuka by NASCAR management, an agreement was signed in 1995 to welcome the NASCAR Thunder Special Suzuka to the circuit the following year.

It was decided that the NASCAR Cup Series cars would use the eastern section of the Suzuka Circuit – about half the length of the Grand Prix layout used by Formula 1.

Organized as a purely exhibition race, with no points paid, the first NASCAR Thunder Special Suzuka race was held on November 24, 1996.

The race was split into two 50-lap segments, after the first of which the top 10 would be reversed. Rusty Wallace was absolutely dominant, leading 84 of 100 laps. Only Jeff Gordon (12 laps) and Terry Labonte (four laps) touched the lead throughout the day.

On the field of 27 cars, four Japanese drivers took the wheel.

Suzuka native Hideo Fukuyama nearly cracked the top 10 on his home track before being thrown into the wall by Wally Dallenbach Jr. with 10 laps to go.

Keiichi Tsuchiya, known as the Drift King in Japan, widely credited with advancing drifting to international recognition, battled his way to a 15th place finish in 1996 and an 11th place finish the following year.

In 1997 the race distance was extended to 125 laps around the same layout used the previous year. Mike Skinner took the win with Mark Martin in second and Randy LaJoie in third.

In every way, it was real road racing, even though road racing was rarer in the 90s than it is today. Both races featured close racing, hotly contested track position and a few instances of avoidable contact. Proper 1990s stuff by NASCAR standard.

However, in 1998 the event took on an even more traditional twist and moved to the Twin Ring Motegi oval circuit. Built just a year before, Motegi includes both a road course and an oval circuit, and the two pass twice during a lap.

This race, dubbed the Coca-Cola 500, saw Dale Earnhardt Jr. and Dale Earnhardt Sr. share the track for the first time in Cup competition. Mike Skinner won his second victory in Japan in as many years; his only two victories in his Cup career.

While Japanese fervor for the sport is indisputable, attendance was not optimal and getting the series to Japan from the United States was a logistical and financial headache. No… more like a migraine. Ultimately, NASCAR never returned to Japan after 1998.

In 2017, NASCAR COO Steve O’Donnell said that several groups in China had expressed interest in working with NASCAR, but issues of sustainability and return on investment left NASCAR management hesitant to this stage.

Breaking into the international motorsport sphere is likely to remain difficult in the future. The American passion for oval racing is almost exclusive to these United States. Few countries used former horse racing tracks as motor racing venues, and comparable low-budget avenues in sports such as dirt racing do not exist in abundance outside the United States.

Although NASCAR’s Whelen Euro Series works well, the truth remains that it is a NASCAR series in spirit and a production car – sports car hybrid in practice.

Outside of North America – where NASCAR is already working on its presence in Canada and Mexico – the next logical destination for NASCAR to venture overseas would likely be Europe, where motorsport has a long and well anchored. However, money and time are still a challenge that NASCAR hasn’t come close to meeting since its adventures in Japan.

The cars and their equipment had to be loaded and shipped to Japan four to eight weeks in advance to make the event possible, and believe me, the 15-hour flight from Detroit to Osaka is not pleasant. Add to that a less than ideal turnout, and the fate of the NASCAR-Japan pairing was sealed as quickly as it began.

While the prospect of NASCAR drivers launching the Next Gen car on a modern track like the Yas Marina Circuit or the Bahrain International Circuit, the issue of logistics and a tolerable payout still keep NASCAR from a consistent globetrotter.

Further information on NASCAR’s foray into Japan can be found in the 2017 mini-documentary Made in Japan, available for viewing at foxsports.com.

A daily email update (Mon-Fri) providing racing news, commentary, features and information from Frontstretch.com
We hate spam. Your email address will not be sold or shared with anyone else.