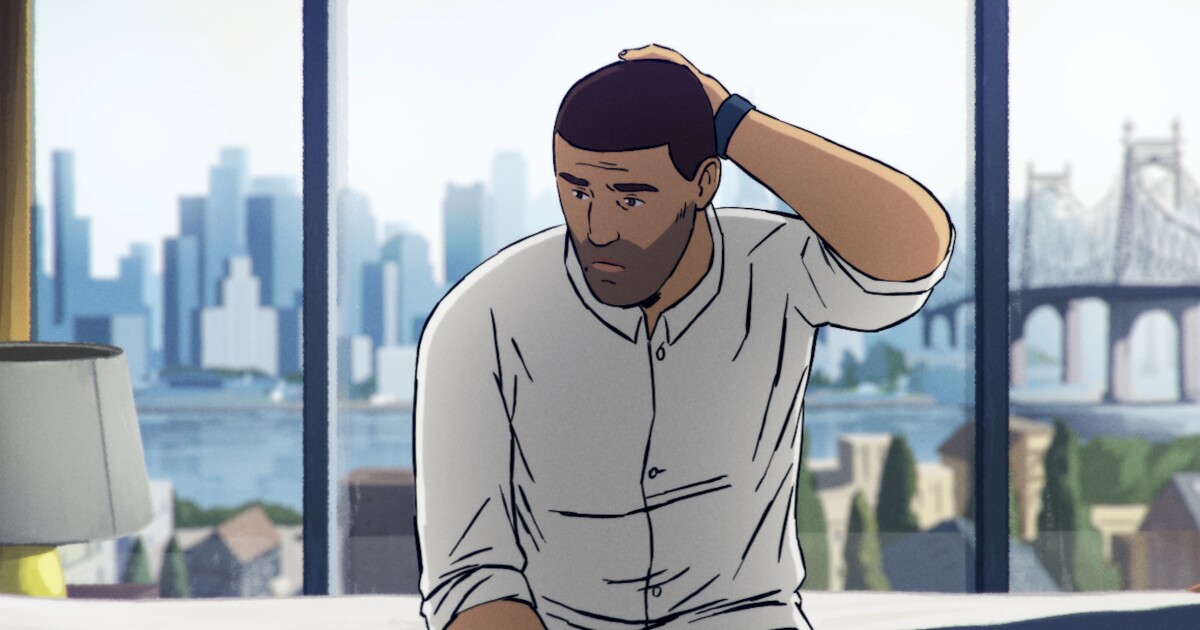 Review of “Fuis”: an animated doc is a moving portrait of a refugee

Amin Nawabi sits in front of the camera and closes his eyes in Danish hybrid documentary ‘Flee’ – an intimate portrayal of the enduring traumas of displacement and one of the most human films of the year. He takes a deep breath and distant memories begin to spring up, punctuated with feelings and details from long ago.

He is first and foremost a young boy dancing the streets of Kabul in the 1980s, carefree as Western pop music explodes with pink headphones on his ears. Later, he sits in the backyard of his family home listening to the stories of his father, who was taken away by the Communist government and will never be seen again. Sometime after this, he recalls the shock of having fled war-torn Afghanistan in 1989 with his mother and siblings – only to be stuck in limbo with expired immigration papers in Russia post – sorry Soviet, watching Mexican telenovelas dubbed to mark the time before mounting ever more heartbreaking attempts towards a better future.

Decades of lingering anxiety, fear and buried pain unfold as Nawabi, now an academic living in Copenhagen with her boyfriend, recounts her experiences as an Afghan refugee child to director and longtime friend Jonas Poher Rasmussen in “Flee” (The film, which won the Sundance Grand Jury Documentary Prize earlier this year, is also Denmark’s official Oscar nomination.)

Rasmussen first met Nawabi (credited under a pseudonym and also co-writer of the film) when he was a high school student. The film includes her own vivid memory of seeing the young Amin being kept first, then a calm immigrant child in a strange land, struggling not to be noticed. Now, after decades of close friendship, Rasmussen is trying to record the story of his friend’s youth. He ended up bearing witness to painful truths that Nawabi had kept locked up deep within everyone around him, the film becoming not only testimony but a catalyst for catharsis.

Interspersed with archival footage and presented primarily in expressive 2D color animation footage, “Flee” grounded Nawabi’s memories in the contexts of the geopolitical clashes that left him, his family, and thousands of other refugees. displaced and desperate enough to risk danger, separation and worse for a better life.

Hosting multi-year interview sessions and descriptive memories of Nawabi, “Flee” uses the freedom of its format to paint a more complete picture of its subject, lived experiences and emotions than it might otherwise have. could have been possible otherwise. The choice gives momentum to moments of humor and tenderness, such as when Nawabi confesses his childhood crush on Jean-Claude Van Damme (who, in the form of an animated flashback, has winked at him ever since. poster hanging on his bedroom wall) and revisits a sweet bond with an older boy who reinforced a lonely and perilous episode in his life.

But it is his vivid memories as a trafficked refugee – first smuggled into Russia, then to Denmark, where he eventually arrived on his own and was placed in foster care as a teenager – that fuel some. most urgent and indelible footage, including a shocking display of cruelty on a walk through snowy woods and a heartbreaking memory involving a boat full of hopeful refugees and a passing cruise ship.

“Flee” is a work of great empathy for the refugee experience, bringing audiences closer to the fears of violence and repression that drove Nawabi’s family to leave their home and the abuse and apathy that he describes what they faced when they left. Most poignantly, it illustrates how unseen scars can remain etched on those who are violently separated from their families, homes, and the promise of safety, even long after the journey is over.

As he and his family fled from country to country, putting their lives in the hands of human traffickers, Nawabi learned to keep his head down, beware of authority figures and stay vigilant. at any time. Even in animated form, sorrow for what has been lost along the way is palpable in Nawabi’s voice. It’s noticeable as he reads his teenage diary, struggling to recognize his own handwriting in his native language as he revisits the detailed account he wrote of the family he lost in Afghanistan, though ‘he doesn’t reveal the true extent of his emotions until much later.

For Nawabi, the ingrained instinct to suppress his identity in the name of self-preservation ran even deeper: as a young man, fearful of being rejected by the only family he had if they knew he was gay, he had kept the truth obscured – a memory he recounts with great dramatic effect in one of the film’s most startling scenes.

But this kind of long-term anxiety can be exhausting and destructive. Elsewhere, Rasmussen’s camera captures silent cracks in the otherwise loving family life that Nawabi shares with his partner Kasper, whom he admits on camera he doesn’t yet know all the dark and painful secrets of his past. The more Kasper pushes them to take root, the more walls Nawabi builds.

This reluctance, he comes to understand, is mixed with his feelings of guilt over the sacrifices his family made to survive. In the film’s sweet final frame, Rasmussen lifts a veil that suggests that his friend, by telling the past tense truth, has finally started to forge his own path.

A “Metal Men” movie comes from the directors of “Little Mermaid”