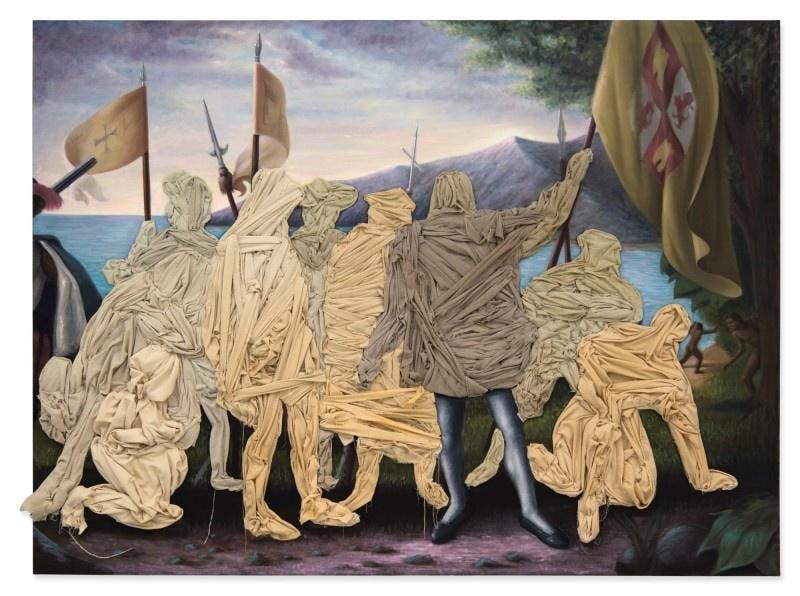 Shattering the Myth of the Mayflower, These Artists Create New Iconography for a Nation of Immigrants

Seeking to flee fascist Italy for the United States in 1941, artist Saul Steinberg should have applied some art to his expired European passport. Whimsically enhanced with a hand-crafted rubber stamp, the “slightly fake” document supposedly helped him dodge dehumanizing bureaucracies on both sides of the ocean. After arriving in America – after a year of limbo in the Dominican Republic – he continued to exercise his graphic talents, producing a series of absurd diplomas and certificates that brilliantly evoked the arbitrariness of citizenship.

One of Steinberg’s elaborate passport-inspired artworks is featured in Arrivals, an invigorating exhibit at the Katonah Museum of Art that investigates America’s complicated history as a “nation of immigrants.” Drawing on three fundamental moments in the nation’s prehistory – the arrival of Christopher Columbus, the Middle Passage and the docking of the Mayflower – the exhibit also encompasses the perspectives of the Indigenous peoples who were here long before all of these events. , as well as the enduring complexities of immigration and xenophobia from World War II to the present day.

Some images will be familiar to anyone who has ever studied civics. Vintage engravings of well-known paintings by John Vanderlyn and Peter F. Rothermel depict the landing of Columbus and the Pilgrims with all the melodrama that made those moments legendary. These works serve as an important basis for more recent interpretations of the past that take into account the fictions of zero earth and the civilization of the savages.

Some artists directly question this more than slightly false American iconography. For example, that of Titus Kaphar Columbus Day Painting recapitulates the work of John Vanderlyn but wraps European figures in rags, stripping them of their presumed authority.

More subversive is the work of Norman Akers, an Osage artist whose alien conquest reuses the engravings of the Founding Fathers found on modern banknotes. His lithograph puts their heads inside flying saucers surrounding the portrait of a tribal chief in ceremonial dress.

This acute inversion of otherness is an effective way to confront the underlying assumptions of American society, which has victimized Native Americans since the earliest days of colonization, while hypocritically marginalizing black people whose ancestors were brought into servitude. and closing borders to newcomers of all colors except white. The question of who owns has too long been resolved by opportunism backed by power and checked by acts of exclusion and discrimination based on biased comparisons with the ruling class. Deferring the colonizers is not enough to solve today’s political problems, let alone make up for past atrocities, but undermining the false distinctions between insiders and outsiders is a necessary condition for substantial reconciliation.

This transformation requires multiple approaches, articulated by a wide range of artists with diverse backgrounds and perspectives. For Annie Lopez, the impetus was the passage of SB 1070, a 2010 law allowing Arizona law enforcement to demand proof of citizenship from anyone. Intended primarily to intimidate the Latino population, the law placed people like Lopez in a position of constant questioning, ignoring the fact that many (including Lopez) had longer histories in Arizona than the governor and many lawmakers. of state. Show me your papers and I’ll show you mine responds to this injustice by printing Lopez’s documents on paper tamale panties and bra. The sense of personal violation is made visceral, forcing viewers to put themselves in his shoes.

There is a generational and cultural chasm between Annie Lopez and Saul Steinberg’s artistic treatment of personal papers, but both address alienation from within, transcending the satirical portrayal of discrimination by the authority of lived experience. . . (As it turns out, the story of Steinberg’s “slightly fake” passport has been slightly false, later crafted by Steinberg, adding artistic embellishment to his Kafkaesque escape from Europe.) The balance of sharp humor and earnest statement – ​​also evident in the work of Norman Akers and Titus Kaphar – has the potential to simultaneously upend the status quo. quo and to encourage empathy for those hurt by it.

Both movements are essential to real change in the context of American democracy. With their ability to transform autobiography into alternative iconographies, artists are perfectly positioned to achieve both at the same time.