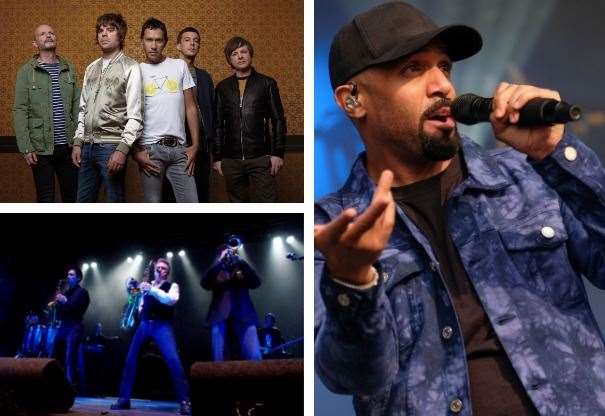 A host of 80s and 90s hitmakers will take to the stage at the second Sign of the Times festival before a solo concert by Craig David.

Once again Churchend, near Little Hadham, will be transformed for two days of musical nostalgia with the likes of UB40, Echo and the Bunnymen, Shed Seven and the Boomtown Rats on Friday July 1 and Saturday July 2.

On Sunday July 3, the venue will host a separate concert by British garage legend Craig David, backed by a live band. The Seven days the star and multi-platinum artist will be supported by artists, who have yet to be announced.

Organizers returned to East Herts after a successful launch last year and lined up 27 numbers for Sign of the Times.

Friday’s headliners are UB40, with original frontman Ali Campbell. The reggae and pop band formed in December 1978 and since then have scored over 50 UK Singles Chart hits, including original tracks like One out of ten and The earth dies screaming and a series of popular cover versions, including Red, Red Wine and kingston town.

The Brummies are backed by Liverpool’s finest Echo and the Bunnymen, who achieved chart success in the 80s with murder moon, The cutter, Crocodile, seven seas and Bring on the dancing horses with an incomparable voice from singer Ian McCulloch.

Also on Friday’s main stage are Scottish punk rock and new wave band Skids, fronted by founding member Richard Jobson; The Farm, the Liverpool band behind the anthem All together now and Sensational train; and JoBoxers, the new wave band that tore up the charts with catchy tunes like Boxer and just got lucky.

Friday’s line-up on the Big Top stage is Northern Irish rock band Therapy? with the support of Scottish indie rockers Glasvegas, alternative rock band, Pop Will Eat Itself, most famous for the hit can you dig it; Kirk Brandon’s post-punk theater of hate and furry bikers features Si King’s funk and soul ensemble, The King Cush Band. They changed their name from Little Moscow after the Russian invasion of Ukraine.

Friday live performances begin around 4pm with a 12pm kick off on Saturday when Shed Seven, who formed in York in 1990, headline.

During the 90s, the Britpoppers had four top 20 albums and 15 top 40 singles, including Get better, Aim for gold, She left me on Friday and Pending.

Since forming in 1975, Irish new wavers have released seven studio albums, seven compilation albums and 23 singles and their hits include In search of number 1, Mary of the 4th form, She is so modern, like a clock, Rat trap, I do not like Mondays, Diamond smiles, someone is watching you and banana republic.

Lightning Seeds from Liverpool, most famous for the hit lucky you which frontman Ian Broudie wrote with specials icon Terry Hall and Three Lionsthe football anthem created by Broudie with comedians David Baddiel and Frank Skinner, is third on the bill.

The Undertones, formed in Derry, Northern Ireland in 1974 and now fronted by Paul McLoone rather than original vocalist Feargal Sharkey, appear with a back catalog including Teenage kicks, jimmy jimmy, Here comes the summer and You have my number (why don’t you use it?).

Also featured are Scottish brothers Pat and Greg Kane, better known as Hue and Cry, who scored their biggest hit in 1987 with labor of love; Coventry’s The Primitives, famous for its international success in 1988 Accident; technopop punk rockers Republica, which released Ready to go in 1996; and mod-revivalist Block 33.

The bill also includes Sleeper, directed by Louise Wener. The band racked up eight UK Top 40 hit singles, including sale of the century, Between two and What do I do now and their music also featured in the film‘s soundtrack Trainspotting.

The Beat fused ska, reggae and punk and are best known for their singles The tears of a clowna cover of the Motown hit by Smokey Robinson and the Miracles, I can’t get used to losing you, Mirror in the bathroom, Don’t touch… She’s mine and Best friend.

Music is back in style on Sunday with a concert by Craig David. His career spans two decades and the singer, songwriter, rapper, DJ and record producer has recruited a new generation of fans.

He came into the limelight in 1999, appearing on the single Rewind by Artful Dodger and the following year he released his first studio album, born to do it. Five more have since followed and he has collaborated with a string of stars including Sting, Tinchy Stryder, Big Narstie, Kano Jay Sean and most recently last year with MNEK on Who are you.

For tickets to Sign of the Times, see https://signofthetimesfestival.co.uk/and for Craig David, go to https://blockrockinevents.co.uk/events