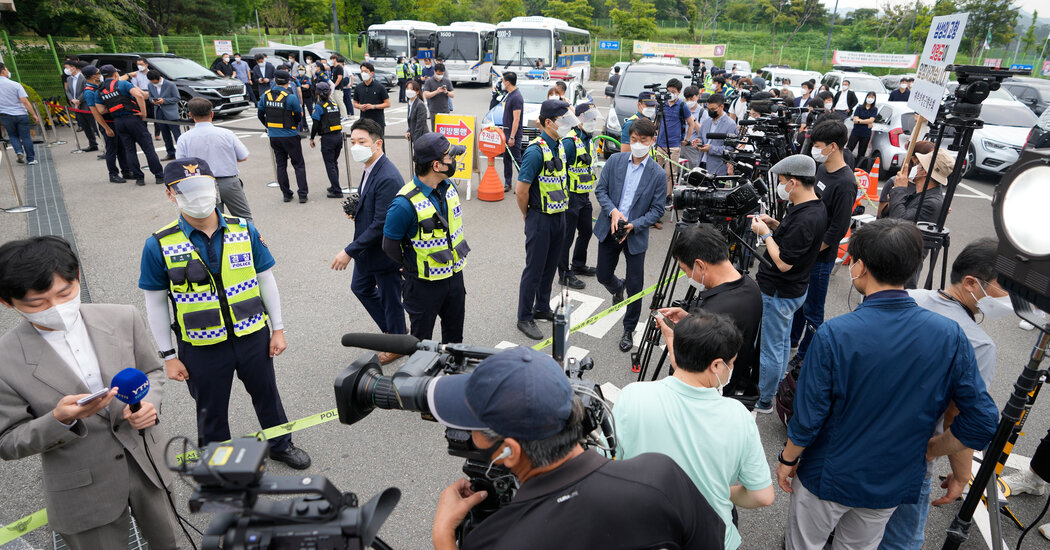 SEOUL – President Moon Jae-in and his Democratic Party in South Korea have spent months dedicated to eliminating what they called fake news in the media. But lawmakers had to postpone voting on a new bill this week when they encountered a problem: No one can agree on exactly how to proceed.

Mr. Moon’s party, which controls a majority in parliament, introduced the bill in August, billing it as one of the last major reforms to his administration before his five-year term ends in May. The bill sparked an outcry from national media and international rights groups who warned it would discourage journalists from investigating corruption scandals and have a chilling effect on press freedom .

The proliferation of unverified reporting is not unique to South Korea. As more and more people consume information online, often viewing what they find on social media to be true and reliable, the problem of disinformation has grown global, deepening political divisions and complicating efforts to preserve the information. integrity of the elections and fight against the pandemic. But the government’s attempts to stem the flow of disinformation have raised questions about free speech, censorship and democratic retreat.

Hardly a day goes by that newspapers and social media accounts in South Korea publish badly-sourced corruption information that candidates for next year’s presidential race have called “fake news” . The fight escalated after Cho Kuk, a key ally of Mr Moon, resigned as justice minister in 2019 amid allegations of ethical breaches and financial mischief by his family. The scandal rocked Mr. Moon’s administration, and Mr. Cho’s supporters and critics sharply accused each other of spreading false information to influence public opinion.

Moon said last week that the country needs stronger action to tackle “fake news and false reporting that has caused great harm to the state and to individuals.” He then began to distance himself from the bill after concerns were raised at home and abroad.

Journalists’ unions in South Korea, which are generally sympathetic to Mr. Moon’s liberal government, have criticized the bill. The main conservative opposition, the People Power Party, has called this a “dictatorial” attempt by the Moon government to muzzle the hostile media.

National media and international rights groups have also spoken out against it, warning that the bill’s vague definitions of “false reporting,” “harm” and “malicious intent” would lead to journalists’ self-censorship and limit freedom of movement. publication of unpopular and minority opinions. .

Mr. Moon’s party presented a list of recent bills aimed at eliminating disinformation, including false narratives on sensitive historical topics. Some of the bills have already become law.

The bill that was postponed this week targeted print, online and broadcast media. He proposed a review of South Korea’s Press Arbitration Law that would allow local courts to impose punitive damages on media that publish false news “willfully or with gross negligence” or that infringe upon the media. rights, cause property damage or inflict psychological distress.

The bill provided for punitive damages of up to five times the actual loss caused by the false reporting. Mr. Moon’s party hoped that the heavy financial penalties would force the media to take the fact-checking process more seriously.

“Disproportionate penalties such as heavy fines can have a significant chilling effect on freedom of expression in South Korea, which is already limited by criminal defamation laws which should be abolished,” Human Rights Watch said in a statement.

On Tuesday evening, Mr. Moon’s party admitted that the bill was too risky to pass as is. Lawmakers agreed to put the bill on hold and allow opposing parties to continue negotiating until the end of the year.

Even before the new bill was introduced, victims of false information in South Korea could seek redress, including corrections and compensation. They could also sue news organizations for defamation, which is a criminal offense in the country. Supporters of the new bill said the financial sanctions in South Korea had been too weak.

Between 2009 and 2018, 2,220 civil lawsuits were filed to seek compensation for false news. Less than 40% of these resulted in financial settlements, which averaged $ 16,600, according to the data of the country’s Press Arbitration Commission. Almost half of the victims who obtained settlements were paid $ 4,260 or less.

In a survey Last year by Media Today, an online news publication, four-fifths of 1,000 respondents supported the imposition of punitive damages against the media for publishing disinformation.

News outlets have complained that the new bill will allow courts to take an organization’s income into account when awarding damages, meaning that larger broadcasters and mainstream newspapers and more influential people with the resources to do investigative work would likely suffer the most serious damage.

Mr. Moon’s ruling camp has had an acrimonious relationship with South Korea’s biggest newspapers for some time. The newspapers, which are all conservative, have been very critical of the policies and scandals surrounding Mr. Moon’s administration.

On Tuesday, the ruling party vowed it had not waived severe punitive damages for publishing false information.

“We can no longer pretend that there is nothing wrong when irresponsible reporting drives companies into bankruptcy and ruins people’s lives and reputations,” party leader Song Young-gil said in August. . He said that comparing the bill to “gagging the press” was “demanding the right to publish false and manipulated information.”

Reviews | Talking about race is tricky. Here’s a reason why.