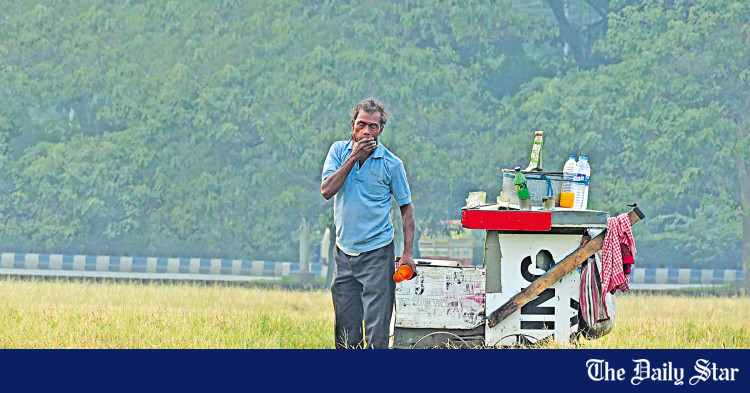 The biggest irony in the life of Lal Miah

For all the latest news, follow the Daily Star’s Google News channel.

2 cups of muri (puffed rice). Lal Miah has two white cups, one of which has a broken handle.

1 teaspoon mustard oil. Lal Miah buys mustard oil from a local store; he uses the oil both on his hair and in the jhalmuri.

Salt (to taste) and 2 tbsp. chopped coriander leaves; he brings them home.

Lal Miah mixes muri and chanchur in a bowl and thinks of Ghetur Ma whose husband recently left with another woman but Ghetur Ma doesn’t seem sad or even slightly worried.

Lal Miah chops onions and cries, but he’s not sad and they’re not tears; there is no great tragedy or solid heartbreak in his life although he sometimes likes to imagine himself as a heartbroken lover.

Lal Miah cuts green peppers; the green trees rustle in the light breeze that reminds him of the house in his village where he has wanted to go for two summers and a monsoon.

Lal Miah pours a teaspoon of mustard oil and hopes it won’t rain today; whether it is a light rain or a heavy downpour, both are inconvenient and he has to run sharply, carrying the support on his shoulder.

Lal Miah mixes all the ingredients and shakes; he heard from someone that there was a song called Shake, Shake, Shake, although he had never listened to it himself.

SERVE: He folds papers and pours the mixture into them. He puts spices according to the taste of the customers. If he is in a good mood, he serves with a generous smile that always goes unnoticed.

THINK AHEAD: Lal Miah doesn’t like selling jhalmuri and is looking for another job. He will however keep the recipe and if Ghetur Ma becomes his lover, he will sometimes make jhalmuri for him.

Marzia Rahman is a novelist and translator. Her translations have appeared in Six Seasons Review, Writing Places Anthology (UK), The Book of Dhaka, The Demoness and When the Mango Tree Blossomed.