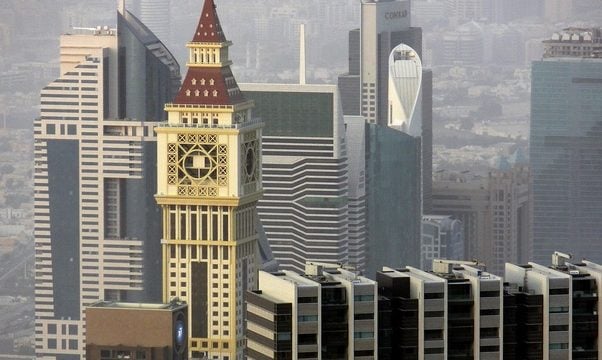 The cities of tomorrow will be designed around a central element: a modern remix of the classical architecture we know and love.

Designing and shaping the urban environment is one of the most direct and immediate ways to effect social change. You can do a lot for people by controlling the spaces in which they live, work and play. Just see how famous New York city planner Robert Moses integrated racism into the fabric of “his” city.

In “A visual story of the future”, Darren Garrett examines a number of different ways cities have been used by illustrators and designers to indicate the future. Sometimes it was the background of the future, sometimes it was the future itself. Anyway, if imaginary cities are an easy shortcut for the world of tomorrow, I think it also follows that we can use the ways we talk about cities that are already under construction – the cities that are just emerging from the drawing boards to become reality. -as a way to better understand the world we already have. We are all biased towards certain types of buildings and architecture, certain types of cities, which affect our comfort with these futures.

Perhaps the most intuitive example of this I experienced was visiting the Great Wall of China a few years ago. I was in Beijing for a three day layover and decided to go sightseeing and take a bus to Badaling, about 80 kilometers from the capital. It’s a section usually teeming with tour groups, next to a large museum, several hotels, and a vast asphalt lot that all those sightseeing buses can park on. There is also a cable car. It’s a very completely restored section of the wall; it looks brand new in places. And that was everything I was conditioned to expect from a theme park in Europe or North America, not a world famous historic site.

But then, it’s because I have expectations about what “the story” looks like. Ruins, preserved in the state where someone decided they shouldn’t deteriorate further. There are exceptions – a lot of European castles still function as houses, for example – but I was alienated by this approach to historic preservation. I know, rationally, that feeling overwhelmed by the Great Wall of China is extremely rude, but this is how I am culturally prepared to understand authenticity in relation to buildings. Most of us do this when it comes to new buildings, new cities, new futures for the built environment. The ways we interpret things like “authenticity” and “beauty”, even in something like a wall, are entirely relative.

Anne Applebaum wrote about it for Slate in 2011 which has marked me ever since. She says she visited Dubai and was surprised at how “incurably vulgar” the city seems to her “jaded American eye”:

There is almost no evidence of local history or culture. International brands are plastered everywhere, from Applebee’s to Rolex, and everything is imported, from Nobu’s raw fish to Starbucks coffee. In Abu Dhabi, the emirate opposite, they even bought the names Louvre and Guggenheim and are building corresponding museums.

She then points to the stories that Europeans wrote about visiting the new large cities of North America in the 19th and early 20th centuries. Europeans were baffled to see the distinctively European iconography and design reproduced on the brash new American skyscrapers. Abu Dhabi getting a branch of the Louvre is no stranger to the paintings of the Old Dutch Masters being in the Frick’s collection. Reactions to the immense inequality between a rich, ethnically homogeneous elite and a poor and ethnically diverse working class are also surprisingly similar to those of Westerners speechless at the Burj Khalifa while lamenting the neighboring slums.

Americans not only adopted the European style when they built their country, but they also imported European mercantilism, capitalism and colonialism. It makes sense that building a world-class city today from scratch involves so much selection and mixing of “real” cities – and this will, at first glance, seem utterly inauthentic to outsiders whose cities are being imitated. . .

In China, this is happening in the most demanding way, with quasi-literal copies European cities and emblematic buildings of the New Chinatowns. These buildings may be ‘inauthentic’ or ‘fake’, but if they copy buildings that people across the world love so much that they have kept them for centuries… so what? These buildings must be doing something right. (And that doesn’t forget how many “authentic” European buildings were rebuilt after 1945, in the style of the Great Wall.)

Abu Dhabi getting a branch of the Louvre is no stranger to the paintings of the Old Dutch Masters being in the Frick’s collection. Reactions to the immense inequality between a rich, ethnically homogeneous elite and a poor and ethnically diverse working class are also surprisingly similar to those of Westerners speechless at the Burj Khalifa while lamenting the neighboring slums.

“Like Europeans before me, I resist the idea that Dubai heralds the civilization of the future,” writes Applebaum at the end of his article. “But I have to admit that, in a sense, it could. … There have always been people who dream of escaping from their culture, who aspire to forget their history, and who are content to live without a past. And now in Dubai they can.

With all of this in mind, the question, I think, is simple: which cities become “the future”? After all, the neon-lit cities of East Asia (especially Tokyo) have been allowed to be “the future” for decades now, as direct inspiration from the cyberpunk genre. Why Tokyo, and not the techno-Islamic collage that is contemporary Mecca, for example? Why is only one of them instantly recognizable as the future-already-here, and the other, well, “cultural vandalism“? (It will also be fascinating to see if the success of Black Panther will lead to the integration of Afro-futuristic cityscapes into science and other popular fictions.)

We’ll find some sort of answer over time, at least. There is a short film which I recently found, a promotional trailer for a new book on Soviet modernist architecture in Ukraine, which touches on something fundamental here. In it, one of the co-authors, Ievgeniia Gubkina, tells how different generations of Soviet Ukrainian architects kept trying to start from scratch; each new generation has tried to build its version of a future on its own blank canvas. The immediate past was dismissed, but the older story – heritage – deserved to be addressed because of its survival and the perspective that time offered:

The architects of today do not dialogue with those of yesterday and they, in turn, did not like the architects of the past. … An interesting model is produced. We are unwilling to speak with a generation of fathers and mothers, but we always look to the legacy of grandfathers and grandmothers. Today we are talking to the generation of the sixties, while in their time they spoke to the constructivists of the twenties and thirties.

You could say that this is also how the process of the rise and fall of cities works. The first major popular campaigns to preserve Victorian-era buildings in the West were led by the grandchildren, not the children, of the Victorians. The same is happening now with the brutalism of the mid-twentieth century, both in the West and in the former Soviet bloc.

Poor 1980s postmodernism will still have to wait its turn to be celebrated in the same way, but I know that when it does, my instinct will be the same surprise my parents feel when they hear someone on the TV news defending a “concrete monstrosity” from their youth. The PoMo of the 1980s is cheesy and garish! It can’t be worth saving! Yet it will be, because it, like Dubai, is already the future , just as Tokyo has been for over 30 years now. Whether we can see these futures as blatantly futuristic as the hypothesis claims, well, that remains to be seen.

‘Flash’ movie rumors suggest it could end the DCEU