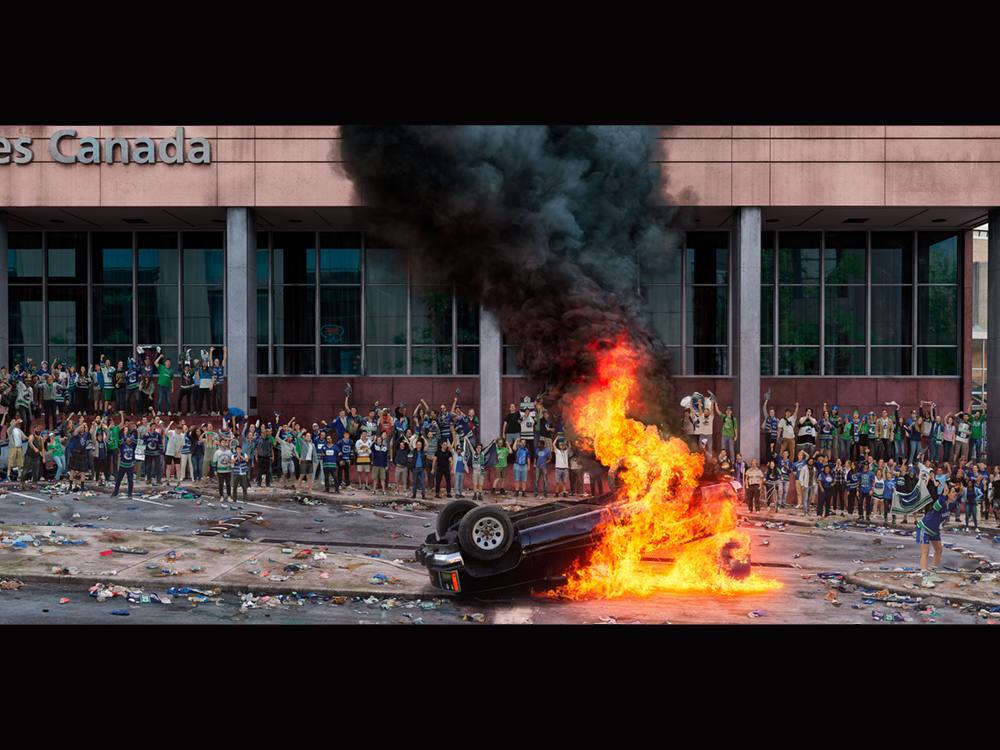 The Riot According to Stan Douglas

Stan Douglas is in the riots.

Announcements, events and more from Tyee and selected partners

Come to our launch of “The Petroleum Papers” by Geoff Dembicki

This is one of the “most anticipated” books of the fall. You are invited to the celebration of The Tyee.

CONTEST: Win festival passes or a gift pack at VIFF

One lucky reader will win a full festival pass and two others will receive a 10-ticket package for the selections of their choice.

Douglas grew up in Vancouver, went to school here, and his most familiar work to locals is probably his large-scale mural depicting the 1971 Gastown riot that adorns the entrance to the atrium. from Woodward on Cordova Street. A prolific artist, he has been widely exhibited. His most recent work, 2011≠1848is featured in the Canadian pavilion at this year’s Venice Biennale.

It is also the subject of a new exhibition at the Polygon Gallery in North Vancouver. At its simplest, it consists of five large-scale photographs and a two-channel video installation.

The title refers to two pivotal years: 2011 and 1848. Also known as Peoples’ Spring, which sounds like a hit from the Mel Brooks film, 1848 was one of the most revolutionary moments in the history of humanity, sweeping away old monarchies and replacing them with crisp new democracies.

The second revolutionary period in 2011, stemming from the financial crisis of 2008, was in fact the revolution that never happened. Despite the violence, the massive protests and the earthquake, nothing has really changed. It was like a bubble of magma that rose to the surface and then descended below. Maybe he’s still out there, fidgeting, waiting for the right moment to burst out again.

All is well, except that it is a false equivalence. The fight for democratic reform that took place in 1848 was not the same as in 2011, hence the “≠” in the title of the show.

It’s an interesting premise. But in the face of large-scale depictions of protests reminiscent of the Arab Spring, Occupy Wall Street and the London riots in the UK that were sparked by the police killing of a young man named Mark Duggan, one had the felt like something was missing. . Given the staggering amount of human effort and energy that each of these events represents, I expected to feel something. And I didn’t.

Why? This is a question that has been bothering me for days.

Speaking of the show, a friend remarked that the presentations at the Biennale itself are remnants of Victorian-era dioramas, staged partly as theater and partly as a recreation of world events. This type of show was designed to draw the audience to events or places that they could not witness but only read about. The photographic images in 2011≠1848 doing something similar, flattening the events into diminishments that reminded me, oddly enough, of Victoria’s miniature world. But in today’s age of fake news, there are difficult implications to piecing together events with a optical illusion level of detail. If the intention of removing the real things and replacing them with a facsimile or simulacra is to heighten and accentuate the unreality of the scenes depicted, then I suppose it succeeds. And maybe that’s the point?

But it is strange.

The split between art and the meaning it carries can be very strange. Intimately united, the two rubbed shoulders, in a sometimes disturbing coupling. I appreciate the effort and ideas in 2011≠1848but the overt stagnation, the theatrics that verges on the slightly clunky, feels bizarre when applied to events in which people have struggled and, in some cases, died.

The murder of Mark Duggan by the police is a good example. Duggan’s death and subsequent police cover-up have been extensively recreated by art collective Forensic Architecture. The murder sparked the biggest riots in UK history, but the tragedy of that event seems lost in Douglas’ image. It details the buildings and the neighborhood in great detail, but misses the big picture.

Douglas is convinced that these are not documentary images, but carefully calibrated and orchestrated recreations. This is especially the case in the image of the 2011 Vancouver hockey riot. Flat, bald falseness is proclaimed in every precisely placed trash and carefully rendered piece of face paint on the rioters. Douglas calls this type of image “hybrid documentaries”. Above all, these images made me want a real documentary. Shortly after seeing the Douglas show, I watched Patricio Guzmán’s new movie My imaginary country (playing at VIFF this year). Guzmán is a Chilean filmmaker whose work, from The Battle of Chile at Nostalgia for Lightdocumented people’s struggle to fight oppression.

My imaginary country takes as its impetus the recent social change taking place in Chile, fomented in large part by young women. The 2019 uprising began, unlikely with an increase in subway fares. But it wasn’t really about people having to pay more for ordinary things than the country’s bloated corruption, and ordinary people being suffocated under a system that favored the old, the wealthy and the privileged.

The protests began with youths shooting onto the sidewalk to make projectiles to throw at police. Guzmán films the stones lying on the ground, saying they remind him of similar tactics used when Augusto Pinochet seized power in 1973. The military junta arrested thousands of people, including the filmmaker himself, imprisoning him in the national stadium for weeks.

By capturing the action, My imaginary country uses some of the same aerial perspective that Douglas also implements in his work, but the feeling is radically different. It is a revolution on foot so to speak, with a seething of bodies in action, throwing stones, fighting, bleeding and dying.

The result of the protests that rocked the country was a sweeping overhaul of the country’s constitution. Although the initial project was rejected, deemed too extreme, a new project is currently underway.

While watching Guzmán’s film, I had a flashback to another documentary, Chris Marker’s cinematic essay A smile without a cat (The bottom of the air is red) which also captures the rise, fall and rise of revolutionary movements. Guzman is clear about Marker’s influence on his work and My imaginary country begins with Guzmán’s memories of Marker.

This kind of call and response, the feeling that the past echoes through the present, is also present in 2011≠1848in a rap exchange titled ISDN. It features two pairs of rappers: TrueMendos and Lady Sanity from London, and Raptor and Yousef Joker who are based in Cairo. As Reid Shier, the curator of Douglas’ exhibition at the Biennale’s Canada Pavilion, explained in his introduction to the exhibition, video installation in Douglas’ work was not as widely seen as the photographic images, in part because she was across town in what was once a salt warehouse. 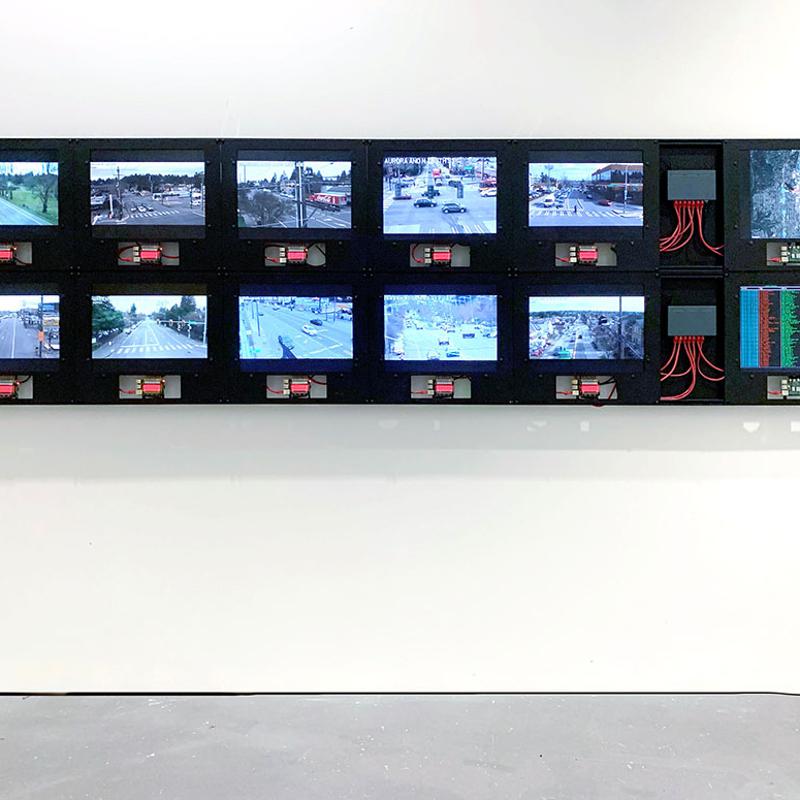 Surveillance technology is used by people as “eyewitnesses”

The video installation featuring the rap exchange took place in Magazzini del Sale No. 5, which dates back to the 16th century. As Shier explains, it was a massive space that gave the work something of a spectacle quality. Polygon’s version is a much more intimate affair, with the two screens in the installation seeming to speak to each other in an immediate and direct way. The music itself is a key element, evoking the idea of ​​anger and activism, over a rhythm. The grime music genre emerged in the UK in the early 2000s, and Mahraganat emerged in Egypt a few years later.

Although it is filmed in such a way as to give the impression that the two groups of musicians are reacting to each other in real time, they were actually shot separately. But despite this technical sleight of hand, the effect is very different from the static images of the show.

As Chris Marker said of capturing any real moment of revolution: “When you want to film a fire, you have to be where the first flame will appear.” In the case of 2011≠1848this flame is not in the recreation of events long after they have died out, but in the music, feverish, alive, sparkling with spunk, humor and bravado.

The contrast between the two treatments of revolutionary change hit me like a brick in the head. Snatching the furious reality of events and transmuting them into something uplifting, deadpan, almost clinical, suddenly felt stiff, frozen in place. Re-enactments of theme parks on Habib Bourguiba Avenue in Tunis, Occupy Wall Street protesters being jostled over the Brooklyn Bridge or what was once Vancouver’s Central Post Office, flattened and rendered static, have sucked the dirty, messy reality of these places and events, digging them out so they feel consumable, suitable for audiences and gallery visitors to gaze into an outdated version of Canada.

Give me music instead, irascible, uncontrollable, irreducible, songs for walking the streets, tunes for throwing rocks, hymns for real change. To his credit, 2011≠1848 is that

by Stan Douglas 2011≠1848 until November 6 at the Polygon Gallery in North Vancouver .

From Shetland to Midsomer, why TV crime dramas are set in such beautiful places