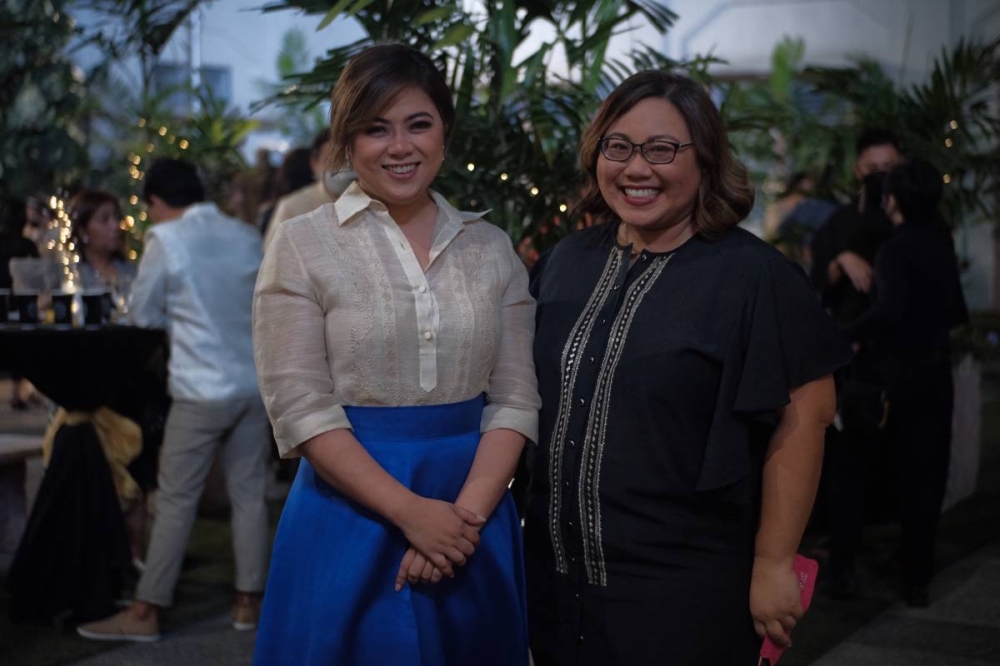 The president of the FDCP, Liza Diño, with Armi Cacanindin during the evening of the ambassadors of the cinema on February 27 at the MET.

Fact — the Philippine film industry has always been a female-dominated industry. Filipino cinema has always carried the indelible mark of the Filipino from the beginning.

Case in point – Atang dela Rama, the first national female artist who also starred in the first Filipino film “Dalagang Bukid”. Key positions in the industry have always been held by women – Dona Sisang led LVN Pictures to its peak while Dona Nene ran rival production company Sampaguita Pictures. His daughter Marichu Vera-Perez Maceda, affectionately known as Manay Ichu, also made significant contributions to the film industry, including her role in organizing Mowelfund and lobbying for the founding of a film agency. which later became the Film Development Council of the Philippines.

With Patti Lapuz and Dodo Dayao.

While the director provides the creative vision for a film and has complete artistic control over the production, it is the producer who turns those visions into reality. Beyond funding roles, they are mostly decision makers on what projects to launch, where to get funding, who to hire for creative positions like writers and directors, and how to manage production logistics from pre-production through to production. ‘at the end. to effective and efficient distribution.

Through more than a century of Filipino cinema, the Filipino has led the industry through ups and downs, through tough times and golden days. She has always been its driving force and fervent advocate. Its quiet strength carried the industry through a hundred years and now film remains an important medium, not only for showing and portraying culture, but also for fostering ideas.

Now, more than ever, more Filipino women are producing, filming and starring in stories featuring leading female characters in prominent roles. There is cause for rejoicing because this phenomenon in itself, this zeitgeist, is already a bearer of hope. The fact that women are in decision-making positions moves us up several notches on the equity scale.

Filipino women are not damsels in distress who need a knight in shining armor. As GD Anderson says, “Feminism isn’t about making women strong. Women are already strong. It’s about changing the way the world views that strength.” The Filipina is already strong and she has something to say. We need to give her an avenue where she can be heard.

In celebration of Women’s Month in March, allow me to highlight some of the country’s established and emerging Filipino filmmakers who are blazing new trails for the Filipino film industry on the local and international stages.

Bianca Balbuena, in addition to being an accomplished producer, is also a screenwriter and CEO of Epicmedia Productions Inc. which brought us the smash hits “That Thing Called Tadhana” and “Fan Girl”; and internationally acclaimed films such as the Venice Film Festival Lion of the Future “Engkwentro” by Pepe Diokno and the Berlinale’s Silver Bear “A Lullaby To The Sorrowful Mystery” (Hele sa Hiwagang Hapis) by Lav Diaz. She is the first producer to receive the Camera Obscura Excellence Award.

His filmography includes co-production projects and film mentorship opportunities with countries around the world. In 2018, she was named Producer of the Year by the Busan Asian Film Commissions Network and the youngest winner of the Asia Pacific Screen Awards FIAPF for her outstanding contribution to cinema in Asia-Pacific.

Armi Rae Cacanindin is head of long-form productions at Globe Studios. She is the producer of the recent Ambassadors’ Night 2022 A-Lister film “Kun Maupay man it Panahon” by Carlo Francisco Manatad which won the Youth Jury Prize at the Locarno Film Festival last year; and the creative documentary “Aswang” directed by Alyx Arumpac which gained international acclaim, including an Oscar nomination for Best Documentary. “Aswang” also made history as the first documentary to receive Best Picture at Famous and won the Camera Obscura Excellence Award, the FDCP’s highest honor.

Arleen Cuevas is an educator and co-founder of the production company Cinematografica, along with Raya Martin and Armi Cacanindin. She is currently a lecturer in production at the University of Breda in the Netherlands. His two films “Independencia” and “Manille” were part of the official selection of the 2009 Cannes Film Festival.

She co-produced Shireen Seno’s “Nervous Translation” which won the Netpac Award for Best Asian Film at the 2018 Rotterdam Film Festival. She has also had several projects with filmmakers Raya Martin and Adolf Alix Jr., some of which screened in various international film festivals. She has also co-produced international productions such as “The Amazing Truth about Queen Raquela” which won the Teddy Award for Best Film at the 2008 Berlin Film Festival and was executive producer of American director John Sayles’ film “Amigo” in 2011.

Monster Jimenez is the producer of “Leonor Will Never Die” which won the Sundance this year. Currently, she runs This Side Up, a content creation house that develops stories for brands and entertainment.

She is also a screenwriter, director and editor, with notable works such as “Big Time”, “Apocalypse Child” and “Respeto”.

Micah Tadena is Country Director of global media company 108 Media, with over five years of media experience. She has developed and produced feature films and short documentaries for organizations such as Netflix, VICE Media, Unesco, etc. “The Mango Bride”, a Palanca-winning novel by Marivi Soliven, is being adapted into a feature film by 108 Media.

Pamela Reyes is also a script consultant and filmmaker. With a decade of experience producing films, series and commercials, Pamela has produced a number of blockbuster films that have reached international heights, including “Birdshot”, the first Filipino film on Netflix and the entry official Philippines at the 2018 Oscars. Currently, Pamela produces selected film projects, local and international co-productions, through her Manila-based production boutique, Create Cinema Inc.

Patti Lapus’ work in online production includes the award-winning films “Midnight in a Perfect World” by Dodo Dayao; “Chedeng and Apple” by Fatrick Tabada and Rae Red; and “Tenement 66” also by Rae Red. She also produced “Nocebo” by Lorcan Finnegan, recipient of a grant from the FDCP and a co-production between the United Kingdom, Ireland and the United States.

She is a resident executive producer and head of production for Epicmedia. She is currently producing Dodo Dayao’s upcoming feature film “Dear Wormwood”. Patti is currently the interim president of the Inter-Guild Alliance, a community network of various groups from the film, television and advertising industries.

Finally, Gale Osorio was the producer of “It’s Raining Frogs Outside” (Ampangabagat Nin Talakba Ha Likol) by Maria Estela Paiso, the first film in the Sambal language in the entire history of the Berlinale. She was also the producer of the short film Babylon, the second Filipino film selected in the Berlinale Short Film Competition in 2018, and has participated in many other national and international film events.

She has also produced “Iskalawags” and “Lily”, and is currently developing Keith Deligero’s “Babylon” into a feature film, and Zurich Chan’s “Cangrejos”. In between film productions, she helps organize the annual Binisaya Film Festival in Cebu City, her way of helping the development of Filipino cinema in the regions.