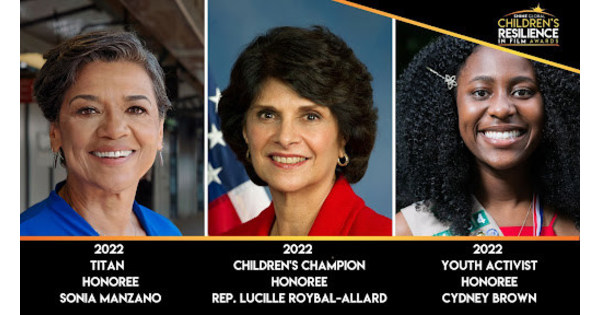 Sonia Manzano is an Emmy Award-winning actress, producer, screenwriter, author and speaker whose contributions to children’s media span five decades. Better known as “Maria” on sesame street to generations of viewers around the world, Sonia is a fifteen-time Emmy Award-winning screenwriter and author of many acclaimed children’s books about Latin American families and child resilience. More recently, Manzano returned to PBS as the creator of Alma Road, a new children’s show set in The Bronx.

Children’s Champion Award – Recognizes an individual who has demonstrated deep commitment through generous support and commitment to youth and family causes.

Congressman Lucille Roybal Allard, the first Mexican-American woman elected to Congress, has demonstrated a deep commitment to advancing children’s rights throughout her thirty-year tenure on Capitol Hill. In Congress, she was the first to protect the health of children through the Life-Saving Newborn Screening Act and the Sober Truth on Preventing Underage Drinking (STOP) Act. Roybal-Allard is also a leading advocate for immigrant families and children, as the original co-author of the Dream Act and sponsor of the Children’s Act for Responsible Employment (CARE).

Activist Youth Award – Recognizes advocacy by a young person who raises awareness on important issues facing the next generation and who has had a positive impact on policy or change in their community.

Cydney Brown is the former Philadelphia Youth Poet Laureate and award-winning author of “Daydreaming.” She recited her poetry at the Philadelphia Museum of Art, Benjamin Franklin Hall, Lincoln UniversityThe Ideas We Should Steal Festival, and she wants to inspire people to speak their truth and share her poetry with the world.

“There are countless people who have dedicated their lives to shining a light on the challenges young people face, but few are committed to raising their voices. Congressman Roybal-Allard, Sonia Manzanoand Cydney Brown are three of those people,” said Susan MacLauryExecutive Director of Shine Global. “Despite their varying spheres of influence, each of our honorees has harnessed their power to shine a light on often overlooked issues, amplify the voices of young people, and make this world shine for the next generation.”

In addition to honoring these three individuals, Shine Global will announce the first winner of the Children’s Resilience in Film Award at October 20 ceremony. Nominees include:

The winner will be selected by a jury including Kay Wilson Stallings, Maria Perez Brown, Amy Kennedy, Scott Feinbergand Jana Sue Memel and will receive a $25,000 cash prize.

An overview of the nominated films can be viewed here: shineglobal.org/childrens-resilience-in-film-award/.

This award, the first of its kind, will honor distinguished filmmakers who masterfully showcase and celebrate the inspiring strength, creativity and power of children around the world. The Children’s Resilience in Film Award aims to shed light on the uplifting and inspiring stories of children who offer hope to global audiences and the talented filmmakers who tell them.

Shine Global is a non-profit media company founded by Albie Hecht and Susan MacLaury that gives voice to children and their families by telling their stories of resilience to raise awareness, promote action and inspire change. We produce inspiring films and compelling content about underserved children. Through tailored distribution and outreach, we connect with our audiences in communities, classrooms, museums and on Capitol Hill in a powerful engagement campaign to drive social change.

Since its inception in 2005, Shine Global films have won over 100 major awards, including an Oscar® for the best short documentary film for innocent and an Oscar®-nomination and two Emmys® for War/Dance. Recent films include the documentary-animation hybrid Lyanathe hit documentary The eagle hunter, Through Our Eyes: The Home Front which is available on HBOMax, and Home is somewhere else which is currently in festivals.

What’s Coming to Netflix in November 2022

ON Culture: A plethora of pianos and a parliament of owls are coming to town