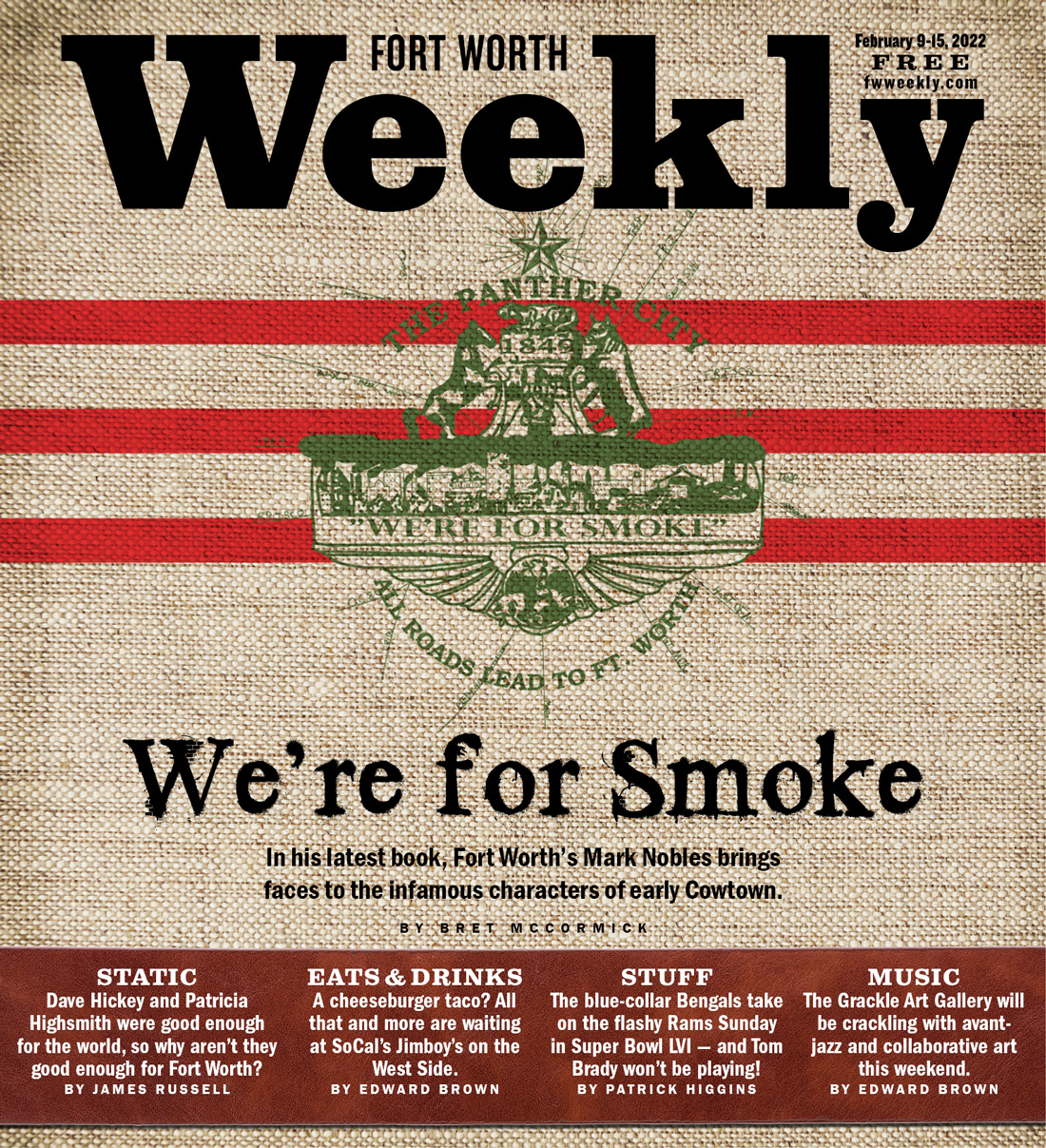 We’re for the Smoke – Fort Worth Weekly

While the title may conjure images of ’60s stoners a la Cheech and Chong, nothing could be further from the reality depicted in this novel. Would you believe that the first official flag of the city of Fort Worth, circa 1912, featured a skyline virtually obscured by smoke and the words “We stand for the smoke.” All roads lead to Fort Worth”? Cowtown, aka Panther City, was trying to shed its brutal Western frontier town image, courting an influx of factories with their jobs and belching smokestacks. The city fathers wanted Fort Worth to join the growing ranks of wealthy cities like Detroit, Chicago, and Philadelphia.

Drawn from actual newspaper articles beginning in 1904 and spanning the years up to 1920, Nobles’ novel features poignant, vicious, pathetic, and tenacious characters. These are all the more appealing for being non-fictional, though the author may have exercised his imagination by providing additional details about their harrowing lives.

Consider Bessie. Abandoned by her parents when she was just a girl in Hell’s Half Acre, she was soon forced into a life of theft and prostitution. Bessie was a survivor and eventually became a local celebrity for escaping twice from the County Jail and the Fort Worth City Jail so many times that she and her captors lost count.

Lawman Kid Yates arrived in Fort Worth trying to make a fresh start after killing a man in Desoto, Texas. Yates was acquitted of the murder but was driven out of town anyway, his wife dead and his two daughters almost more than he could handle. Over the years, Yates’ body count grew, forcing his superiors to re-evaluate his position within the police force.

Poor Tom Lee was oppressed all his life but finally broke down when two of his companions cheated him out of $10 in a game of craps. Vowing revenge, he initiated a series of events that culminated in a confrontation between law enforcement officials and a murderous mob and the most destructive race riot in Fort Worth history.

“The book started with Bessie Williams, jailbreaking her,” Nobles said. “I fell in love with her when an archivist at the Fort Worth Public Library showed me a folder with a bunch of newspaper clippings. Shortly after, I was looking at an exhibit at the downtown library and I ran through the We are for the smoke flag on the cover of the book. At that time (1912), if your city was smothered in smog, that meant you were a thriving industrial city.

We are for the smoke details the struggles of Fort Worth’s poorer citizens as they transition from cattle town to modern city. Local authorities often seemed more concerned with appearances than justice, dispensing retribution at the border while trying to maintain a facade of civilized sophistication. This book entertains, educates and enlightens the modern reader on how far we have come over the past hundred years.

Mark Nobles was born on Fort Worth’s infamous Jacksboro Highway. A sixth-generation Texan, he proudly claims his kinship with the gamblers, outlaws and wasters of Thunder Road. He is also the author of Fort Worth’s rock and roll roots and produced three feature documentaries.