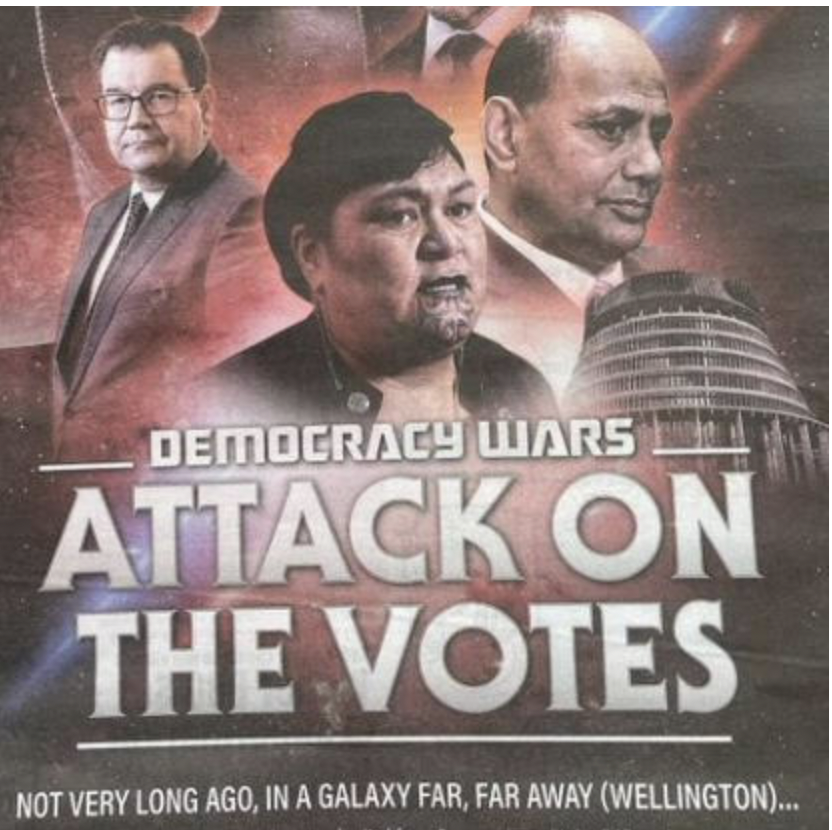 Who will fight for democracy?

THE TIME couldn’t have been better – or worse – depending on which side of the political divide you stand on. First, Trevor Mallard authorizes letters to be sent to Winston Peters, Matt King and (apparently) other former MPs, barring them from Parliament for two years. Then, just 24 hours after this story appeared, Hobson’s Pledge inserted a full-page advertisement in the herald usurp the star wars frankness and announcing an “attack on the votes”.

Leaving aside the double standards of the herald: whose editorial team, despite deeming an advertisement by the group Speak Up For Women (featuring nothing more incendiary than the dictionary definition of “woman”) too much for its readers to bear, was nonetheless willing to bear any harm. graphic intervention could inflict on the body politic; the announcement itself reflects growing public unease with this government’s commitment (or, more accurately, lack of commitment) to basic democratic principles.

At present, most of this malaise is concentrated in the older age brackets of the population. It was New Zealanders who came of age at a time when the two main political parties represented clear and distinct approaches to defining and securing the public good.

The votes cast by New Zealanders in that distant era steered the nation left or right in ways that must seem rather odd to those accustomed to the immutable neoliberal parameters of the MMP. The fact that the National Party won more frequently than Labor was disappointing but not discouraging for Labor supporters. They understood that when the election planets finally aligned for their party, big changes would follow. Changes that, historically, National was more likely to accept than reverse.

In short, older New Zealanders still remember when politics worked. Specifically, they remember when even those on the right of the political spectrum accepted that what Martin Luther King called “the great arc of history” tilted in the direction of justice. They, or their parents, had been brought to the edge of the moral precipice into which right-wing extremism had tried to drag humanity. People who still thought so – even after Auschwitz – were kept on the furthest fringes of political life. The vile content of the letters they sent to the nation’s editors never saw the light of day. Their fascistic delusions were systematically deposited in the nearest garbage can.

With New Zealanders under 40, however, all that political nostalgia means little. Politics has not deviated noticeably since the 1980s, becoming in the 21st century a battle between marketing strategies, not ideologies. Young New Zealanders are criticizing political ads in the same way their parents and grandparents once criticized major party election manifestos. The “look” and “tone” of a political leader matter far more than the ideas he might have. What matters most is that the leader of “your” party doesn’t look like an “asshole”.

“Democracy” no longer enjoys the universal admiration it garnered around the world when it stood before the broken bodies of fascism and militarism at the end of World War II. As Dame Anne Salmond reminded us Writingthe other day, article 1 of the Universal Declaration of Human Rights of 1948 admits “no ifs, no buts, no exceptions” when it states:

All human beings are born free and equal in dignity and rights. They are endowed with reason and conscience and must act towards each other in a spirit of brotherhood.

But, if those words carried the ring of indisputable truth for the parents and grandparents of today’s young voters, those same young voters are more likely to regard them as a wildly dubious set of philosophical assumptions. Where, for example, does the “spirit of brotherhood” leave the women of the world?

“Democracy” in the 21st century offers voters next to nothing in terms of alternative economic policies. Economics is no longer seen as an appropriate subject for the kind of vigorous political contestation that distinguished political parties in the 19th and 20th centuries. In the age of neoliberalism, the economic principles by which a nation is governed have become fixed. Politicians do not question these principles, confining themselves to debating which party is best equipped to implement them most effectively and efficiently.

For young people on the losing side of the economic – that is, class – struggle, it doesn’t matter whether the Labor Party or the National is in power. Neither party would dream of overstepping the bounds of neoliberal orthodoxy. No matter which political formation occupies the Treasury benches, housing is not becoming more affordable, poverty is not being alleviated, unions remain peripheral and climate change is not being seriously considered. As the anarchist slogan goes, “Don’t bother voting – politicians always win.”

The situation we face in 2022 is comparable to the years following the First World War. The vaunted concepts of democracy and progress had presided over carnage without historical parallels – and for what? The enlargement of the British and French empires? The elevation of American capital to world preeminence? The obscene wealth of war profiteers? Mass unemployment and homelessness for those who had survived the horrors of the trenches?

The stench of old doctrines and old values ​​was worse than the stench of rotting Cordite comrades. No wonder veterans have responded so enthusiastically to far-left and far-right demagogues who have denounced democracy as a failed toilet flush.

As in the 1920s and 1930s, the most radical political ideologies of the 21st century are devoted to the nature of human identity and the possibility of human transformation. Ethnicity and nationality remain central obsessions of the far right, while the possibility of transformation continues to guide the left. Where the Soviets dreamed of creating a whole new type of human being – gay soviet – the dream of the modern identity left of evolutionary leaps made possible by the elimination of oppression and privilege.

Dreams on this scale cannot be realized by the sordid compromises of democratic politics. The key objective of the extreme right and the extreme left is to conquer the political apparatus and harness it to the primordial task of human transformation. The modern ideologue fears nothing more than the democratic mobilization of ordinary citizens for the modest purpose of achieving all those ordinary things that make life safe and comfortable. Security and comfort are Kryptonite to the radical political personality.

Guided more by intuition than by ideology, Hobson’s Pledge “captures” the totalitarian implications of a political project guided not by what people Actually want, but what they shouldwant to. His choice of the Star Wars franchise to hang his advertising campaign there is a good one. For what is George Lukas’ fantasy if not ancient mythology, with all its archetypal heroes and villains, tricked out in the dazzling accoutrements of space-age technology?

If “Episode 1” of “The Democracy Wars” was the occupation of Parliament and Trevor Mallard’s furious response to the mob threatening its marble halls; and “Episode 2” is Labour’s “Attack On The Votes”; then the third episode, which is scheduled for release around the end of 2023, can only be – “The People Strike Back”.

But, if Hobson’s Pledge and its allies are to defeat the curious mix of ethno-nationalism and transformative identarism that constitutes Labour’s “Empire”, then its aging leadership will first have to convince young New Zealanders that democracy worth fighting for.